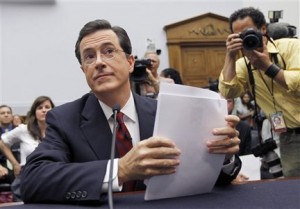 When then-governor Bush ran for president under the banner of “compassionate conservatism,” it seemed to me then (as it does now) that he did not know the meaning of either word.  I was reminded of this on Friday during Stephen Colbert’s congressional testimony before a House subcommittee on immigration, a gig he got because of his support for the UFW’s Take Our Jobs campaign.  The campaign’s purpose is to point out how vital migrant farm workers are to our food system, and how difficult the work is, while also demonstrating that they are not “taking jobs from Americans.”  Fact is most Americans won’t take those jobs for one (or both) of two reasons:  The hard work and the low pay.

Yet it was so-called conservative free market principles that put us in this position – allowing Adam Smith’s invisible hand to guide the agricultural market has led to the simultaneous loss of decent paying jobs to outsourcing while turning a blind eye to the mistreatment, often literal slave conditions of the people who pick, package and prepare our food.

No one in the public eye today is as sharp as Colbert at pointing out the hypocrisy in Washington and in our culture in general, and he pulled no punches in his five minutes before this panel.  This is not to say he was particularly funny despite reading his opening statement “in character.”  He wasn’t.  Sure he had a couple of zingers but for the most part it was beneath his usual standards.  The lack of guffaws had no effect though on the more serious point he was making, which he summed up with his closing reference to Matthew 25:40, in which Jesus says, ‘I tell you the truth, whatever you do  to one of the least of these brothers of mine, you do to me.”

Conservatives will claim the mantle of patriotism and putting America(ns) first, unless and until it runs up their WalMart bill.  They want their food provided quickly and cheaply and don’t seem to care who does it or how those people are treated.  While many migrant farm workers are here legally, many are also undocumented.  Conservatives want those folks jailed or deported but pay no attention to the effect this would have on our food system as prices soar due to a dearth of labor.  Quite a conundrum.  We must either accept the ubiquitous use and abuse of often undocumented workers, or accept higher priced food.

Colbert’s work with the UFW has thus far limited his message to those who pick and package produce, but the same problem exists with food processors and especially in meat packing operations.  The massive meat packers refused to pay union scale, so they hire plenty of undocumented workers who won’t unionize or complain about unfair or dangerous conditions for fear of being deported.

It’s not that Americans won’t do this work, it’s that they won’t tolerate being screwed and the employers don’t have the leverage of deportation to hold over them.  You’ll find a vast majority of these employers supporting so-called conservative politicians, yet they won’t conserve American jobs, nor show compassion for the workers they have.  Their position calls for the untenable paradox of blocking the influx of migrant workers while at the same time maintaining a status quo that is wholly dependent upon “the least of these brothers of mine.”

Where’s the compassion in that?