All Eggs Not Created Equal 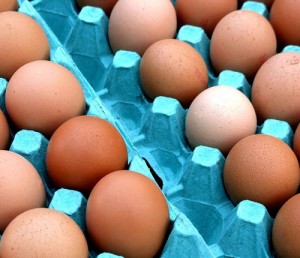 Right now people are a little fearful of eggs, and who can blame them? The recent salmonella outbreak that resulted in the recall of half-a-billion eggs and sickened more than a thousand people across the country has left people wondering just how safe our food supply is. As a nutritionist, people ask me about this a lot—and what’s most important to understand is that all eggs are not created equal. The industrial food industry has taken our foods and made many of them unsafe. Not only this, but the nutritional value of our foods is intricately tied into this same industry. Which leads to another question I often hear: What are the healthiest foods? This should be an easy question to answer, but with the industrial food complex wrecking havoc on our food supply, things have become far more complicated.

Eggs prove to be the perfect example, something that can be an extremely healthy food. I wish I could stop there, but the great variation in the quality of eggs makes this impossible. If we are talking about local, small-scale, farm-raised eggs from chickens that live on pasture and spend plenty of time outside, then yes, eggs are quite possibly the perfect food. Unfortunately, the vast majority of Americans don’t have access to eggs produced this way. On the other hand, if we are talking about the average egg that you pick up in a supermarket, then no, eggs are not very healthy at all. Not only are they unhealthy, but they can actually be unsafe to eat as this most recent recall illustrates.

So what makes industrially-produced eggs so different? Let’s start with the safety issues. Eggs that come from hens confined to battery hen houses are not produced in sanitary conditions. Tens of thousands of cramped chickens spend their short lives either lined up in tiny cages or crowded into open henhouses, standing in their own feces, unable to move around or gain access to fresh air or sunlight. They are stressed and often sick.

Since the late 1980s, salmonella has been a major problem in these giant warehouses. One giant producer in particular, Austin DeCoster of Wright County Egg, has been responsible for multiple outbreaks of salmonella over the years, according to yesterday’s New York Times article. State regulators were so concerned, that for a period of time, New York and Maryland even banned the sale of DeCoster eggs. Salmonella can be quite serious to those with a weakened immune system, babies, young children, the elderly, and pregnant women. According to the Times article, in one of the earlier DeCoster egg outbreaks, nine people died. Salmonella has also been linked to a host of chronic ailments, including reactive arthritis, Reiter’s syndrome, Miller-Fisher syndrome, and ulcers.

Why? Industrial eggs are fed processed grains (usually genetically modified corn that is heavily sprayed with pesticides). This is not the chicken’s natural diet. Chickens are omnivores and will eat grass, seeds, insects, grubs and whatever else they find while roaming on pasture. This varied diet results in a more nutrient-dense egg, which is higher in omega-3 fatty acids, vitamin A and beta-carotene. In addition, chickens that live outdoors convert sunlight into vitamin D and other nutrients that store in their eggs.

Something else I often hear is: But don’t eggs raise cholesterol? The answer is no. People are often shocked by this since the government, dieticians, and doctors have spent years telling people to eat fewer eggs or to eat egg whites alone. But this is a fallacy, as studies have consistently shown that dietary cholesterol is not what influences blood cholesterol levels. In fact, findings from a study published in The Journal of the American Medical Association found that people who ate four eggs per week had significantly lower mean serum cholesterol levels than those who ate one egg per week. Plus, the daily nutrient intake of people who ate eggs was much higher than the non-egg eaters. And you won’t get these benefits from the egg white alone. The egg exists as a whole for a reason, the nutrients in the yolk and the white work in concert to make the egg the perfect food. I would recommend eating at least one high quality egg a day and for children and pregnant women, two or more.

The challenge is making pasture-raised chickens and their eggs available to everyone. Sometimes access and availability are the issue and sometimes it’s cost. Pastured eggs are much more expensive than industrial eggs and this is something that must change. But consider that you are getting more nutritional bang for your buck when you eat pastured eggs. Plus, coming down with a bout of salmonella as a result of a factory farm’s irresponsibility and carelessness is something no one deserves.

Visit your local farmer’s market to find pastured eggs and ask the farmer about his or her practices. To find pastured producers near you go to Eat Wild or Local Harvest.

This is the first piece in a regular column by holistic nutrition expert, Kristin Wartman. She will examine food, nutrition, and the way the industrial food industry affects our food system and our health.