The Good Food Movement is Now a Revolution | Civil Eats

The Good Food Movement is Now a Revolution 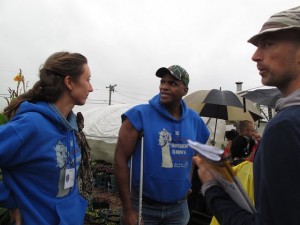 Last week, right in time for fall harvest, I found myself in the company of Will Allen, an urban farming pioneer, Annie Novak,  co-founder of the country’s first commercial rooftop farm, Fritz Haeg, an edible landscaper, and 1,500 others at the first international urban and small farm conference. The weekend was hosted by Will Allen and his organization Growing Power, an educational farm organization that he founded in a food-desert neighborhood of Milwaukee 18 years ago.

Retracing my steps to Milwaukee: a few months ago, in time for spring planting, I had seen the same three urban-agriculturalists speak in New York City. I had left that evening with the strongest desire to change the world that I had ever felt: All I had to do was plant something green.

That night in New York, Will Allen said that there are enough people talking about growing food, but not enough growers. Even though the closest thing I had to farming were the articles I occasionally wrote about it, I responded by joining Annie Novak’s apprentice team at Eagle St. Rooftop Farm. Suddenly, my mostly sedentary Brooklyn life was filled with kale planting, chicken feeding, delivering produce to restaurants via bicycle, and picking up buckets of coffee grounds from local cafes for composting. Moreover, it was filled with a community of eco-agriculturalists, who were propagating my northeast surroundings with inspiring projects.

As summer went on and plants reached up to my waist, my desire to delve deeper into the agricultural field solidified. But, the question of whether this still small world of alternative farming was a solid field grew, too. The Growing Power conference was all the proof I needed to rid that doubt. The mere fact that over a hundred speakers deemed it worthwhile to trek out to the Wisconsin fairgrounds for a weekend and over a thousand audience members parted with the nearly $300 attendance fee shows that something fertile is growing. It shows that the official conference shirt, with its fistful of worms raised in the air and the words “The Good Food Movement is Now a Revolution” is not just Will’s fantasy but the reality that everyone doing “good food” work must face.

The gathering took place at “Ag Village” a remote corner of the Wisconsin fairgrounds devoted to agricultural events. It seemed the perfect setting: a recognition of the already existing and deep-stretching agricultural roots, and a positive and radical addition to them. The conference had many moments like that, ones that seemed almost normal, and yet, revolutionary. The buffet, for example, consisted of–among other items–300 pounds of wild rice, gathered by harvesters at the White Earth Reservations in northern Minnesota. Growing Power had supplied the greens, and meat came from Richard Cates, a Wisconsin dairy and livestock farmer who opens his land for Growing Power students to explore. Cutlery was indeed disposable, as one would expect at a conference, and yet, trash was divided into three containers and all dishware went into the bin with the banana peel taped to it–compost. There was merchandise for sale–it included worm poop, Milwaukee urban honey, and shirts with phrases like “I heart worms.” Seeds and liquid fish fertilizer were given out for free, as samples.

Will’s purpose in bringing these people together was to collect all the fragmented warriors of the revolution and encourage them to work with one another. For the purpose of building well-rounded troops, Will invited a diverse range of folks, not just farmers and educators, but government representatives, urban planners, social activists, the medical community, and members of the corporate world among many others. By the end of the three days of actively discussing the state and future of sustainable agriculture and overwhelming amounts of skill sharing in breakout workshops, it became clear that the good food army is not only real but strong too.

Will believes that the energy created, or rather, harnessed by the conference must now be taken back to communities. “We have this wonderful thing called food that we have to eat. My family’s legacy is to make sure that everybody eats good and everybody has access to the same healthy, affordable, good, food, that is culturally appropriate,” said Will. “The food that’s going to help our gardens, the food that’s going to help our youth.”

He emphasized that this is not the start of the revolution, but rather, a point of continuing. He said all are in it, since all are united by food. And, most importantly, that there is space for everyone to be involved. He reminded us that job creation is an essential factor to consider because the food revolution is a new industry. I thought back to my spring desire to plant. Planting something green, I realized, had little to do with the possession of a green-thumb; instead, it was using whatever thumbs are available for the growth of a healthy food system, from supporting local farmer’s markets, to starting healthy school lunch programs, to–yes–putting hands into the soil.

There is space for more rooftop farms and subterranean farms (like aquaponics), vertical farms (like the five story one that Growing Power is planning on building in Milwaukee) and good old-fashioned horizontal ones. Space for more partnerships with hospital, government organizations, corporate philanthropists.

There is space for amazing leaders. They are inclusive and ever-willing to train new forces. The conference–and the general way of communication in this field–allows for someone like me, an incredibly novice farmer, to spend time with my heroes, ask them endless silly questions, and in the case of Annie Novak, to even become friends. I share my story not to pat myself on the back, but to give credit to people like Will, whose simple statement made all the sense in the world and was a direct call to action; or Annie, who provides Brooklyn with such a beautiful model of a healthy food system and a space where aspiring farmers can learn. Revolutionary indeed, and yet so heirloom.

Tusha Yakovleva is a Brooklyn based journalist and aspiring farmer. She is greatly interested in ecologically-concerned topics and beneficial intersections of country and city. Currently, she divides her time between apprenticing at Eagle St. Rooftop Farm, peddling apples at the Fort Greene Farmer's Market, and writing about food and environment related subjects for a Russian magazine. Read more >