By Naomi Starkman
Agroecology
Posted on: September 20, 2010  |  Leave a Comment 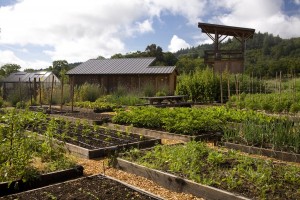 According to legend, from the 16th to 18th centuries, Sonoma County appeared on European maps as a mythical kingdom called “Quivira” whose streets were said to be paved with gold. Today, the Quivira Estate, located in the Dry Creek Valley of Healdsburg, spins its Demeter-certified Biodynamic and organic wine into gold, guided by a deeply held belief of careful stewardship of the land.

Draping the entry to the stunning vineyard lies an inspiring tribute to the true bounty of biodiversity—120 raised garden beds artfully set over just one acre, growing a wide variety of produce, from small, round, orange Turkish eggplant and neat rows of bunching onions, to crisp heads of deer tongue lettuce and glossy green beans, all encircled by the perfume of nearly 1,000 strawberry plants. Installed in 2008, the garden is designed to educate visitors on farming and viticultural practices, as well as supply local markets with fresh produce.

“When we purchased this winery, we saw the potential not only to produce world-class wines, but to create a truly unique and vibrant vineyard farm,” said Pete Kight, who purchased the winery from Holly and Henry Wendt in 2006. The estate has nearly 93 acres of vines, and in addition to Zinfandel and Sauvignon Blanc, grows several Rhône varieties, including Syrah, Grenache, and Mourvèdre, and a small amount of rare varieties, such as Counoise and Montepulciano.

Farm Manager Andrew Beedy designed the garden to be visitor-friendly and practical; he maximized the space and created an environment for all to experience the beauty and productivity of Biodynamic farming. Beedy grows many plant varieties from Slow Food’s Ark of Taste list of endangered foods, which are threatened by industrial standardization. Crops are started from open-pollinated seeds in the greenhouse—he would like to ultimately save all of his own seed—and are part of a four-year rotation cycle (alfalfa cover crops offer nutrients back to the soil and are also fed to the farm animals). The garden and perimeter are dotted with nearly 70 fruit trees, used in Elissa Rubin-Mahon’s Artisan Preserves, for sale in the tasting room (8 oz.; $15; in a dazzling array of heirloom offerings: Blenheim apricot, honey fig, Sierra apple beauty, and Fay Elberta peach chutney). Quivira also offers estate-grown and bottled olive oil (a mixture of Mission and Coratine olives; 12 oz.; $22) and honey (10 oz.; $12).

Quivira has an innovative “Garden Bed Program,” a philanthropic take on a community garden: local restaurants and retailers can buy produce from the gardens in exchange for a $500 donation to Healthcare Foundation Northern Sonoma County. The funds support healthcare access for low income families and children. Participants include Barndiva, Bovolo/Zazu, and Dry Creek Kitchen restaurants, Dry Creek General Store, Relish Culinary Adventures, and Shelton’s Natural Foods Market. The remaining garden produce is used in Quivira’s Farm to Table dinners (the next will take place on October 9) and other dinners in partnership with Slow Food Russian River, which will co-host a special Harvest Dinner on November 7 to support the 4-H Heritage Breeds project.

Animals are a crucial element of a Biodynamic farm, and in addition to their obvious contribution to a farm’s fertility in the form of manure for compost, their care and welfare are given extensive consideration. Quivira allots a full third of an acre to their chicken coop (eggs are used for estate events and sold to local restaurants and grocers) which houses 56 laying hens of all persuasions, including Black Frizzle Cochin, Silver Laced Wyandottes, White Laced Red Cornish, and Dominique Cuckoo Marans. The farm is also home to Jersey cows, pigs, and bees.

The garden showcases other components of Biodynamism: a prep tower, where special compost teas from plants in the garden are made, and cow horns, buried in the garden soil. Probably the best-known (and least understood) aspect of Biodynamic farming, hollow horns from female cows are packed with manure or ground silica and buried at the equinox. The horns’ shape energizes the mixture, and when unearthed in the Spring, are said to have achieved a remarkable level of bacterial activity.

A model of sustainability in many ways, Quivira installed a 55kW solar electric system in 2005, which supplies all of the estate’s energy needs. Quivira has also been actively engaged in restoring Wine Creek, the Coho salmon and Steelhead trout spawning stream that winds through the center of the estate. It donates one dollar to Trout Unlimited for every case of wine sold.

Walking between the tidy beds of the cornucopia that is Quivira gardens is a prime example of how love, attention, and commitment to sustainable practices (including good compost) make magic: peppers, tomatoes, squash, garlic, greens of every sort imaginable, all glowed in the late summer light. “The farm knows more about itself than we do,” Beedy said. “We just provide the environment for the food to do whatever it needs to flourish.” And flourish it does.