In the Belly of the Good Food Movement Beast: What We Ate For Lunch At ALBA | Civil Eats

In the Belly of the Good Food Movement Beast: What We Ate For Lunch At ALBA 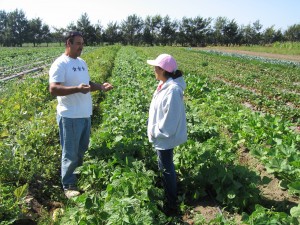 On recent foggy morning, I drove with two food activist companions down a long dusty road in Salinas, CA towards a hotbed of contradictions. In the salad bowl of the nation, sustainable farming thrives alongside conventional farming. We were on our way to visit one of the beacons of creativity and success for the sustainable farming movement: ALBA, the Agriculture & Land-Based Training Association, which trains farm workers and aspiring farmers on 300-plus acres on two working farms to grow and market organic crops.

My traveling companions were eco-cognoscenti: Kari Hamerschlag, an Environmental Working Group senior researcher who moonlights as a California Farm Bill organizer, and Brandon Tomlinson, owner of a Bay Area organic vegetable delivery service. We met with ALBA to assess work to be done for the upcoming farm bill, and to secure supply for Brandon’s small operation. I was also there to report on what food is available and consumed in a food-forward farming environment.  In many parts of the country, food deserts are as characteristic of farming communities as they are of urban jungles. What would we find there?

ALBA’s business model would impress any MBA: an incubator for small farming businesses that help local food economies bloom, support the land with conservation methods and teach farm communities to thrive. So where’s the contradiction? In the lunch bucket, of course.

First, the macro challenge. Farm workers are a population battling not only heartbreaking poverty, civil injustice, and the colossal stupidity of American immigration policy, but also heart disease, diabetes, and even obesity. In Salinas, access to healthy, sustainable food is a challenge; although so much good food is grown here, lunch options resemble West Oakland. What there isn’t: No restaurants serving locally grown foods. Certainly no Whole Foods. What there is:  A WalMart with, according to the store’s Web site, a McDonald’s inside. A Grocery Outlet. For families with sufficient earnings, there are also several traditional Mexican restaurants. Taco trucks for everyone else. In Salinas, farm worker families purchase much of their food from bodegas, which don’t sell locally grown artichokes, tomatoes, and blackberries alongside powdered donuts, beer, chips, and soda.

ALBA is working furiously to change this in their community, and is making progress, but still has far to go. So there we were, surrounded by beguiling stalks of artichokes and tender lettuces, which illustrate the contradiction just as powerfully as a supermarket egg carton with the “farm fresh” label on a product crawling with Salmonella: there’s nothing good to eat here.

Swinging through ALBA’s main office to greet our hosts, we noticed a huge bowl of fresh ripe peaches on the reception desk. Out the window, we saw kids playing energetically at the fields’ edge where their parents worked, horsing around and shouting happily between bites of peach. The ALBA folk were busy submitting a grant application and building out fall’s training programs, so we ate lunch during our meeting. I took notes on the issues and on the food.

Farm worker diets mirror the tragedy of the SAD (Standard American Diet). According to a report by California Institute for Rural Studies, 45 percent of farm workers in Fresno County face food insecurity. Monterey County is no different. Translation: the people who grow and pick our food don’t have enough of their own.  Poor farmers may not be a surprise to many, but here’s a shocker: 86 percent of farm workers surveyed report a high-fat diet, with 30 percent or more of their calorie intake from fat. And 42 percent report eating less than three servings of fruit and vegetables daily. Income, access, and nutritional education are the triple whammy that makes our farm worker population mirror the nation’s nutrition challenges. A recent NPR report covers the same tragedy in California’s Central Valley, where much of the nation’s fruits and vegetables are grown. It’s a fast-food mecca where residents plagued by obesity and malnutrition are forced to drive 35 miles to reach a grocery store.

Looking out the window at the physically fit, happy ALBA children munching fruit between bouts of chasing each other, I was relieved to witness proof of a different lifestyle for those under ALBA’s wing. One of ALBA’s programs focuses on giving their own worker communities access to fresh, healthy, local, organic food, and building economic strength by selling to their own communities.  I saw positive results right in front of me. There’s a downtown Saturday farmer’s market. And some taco trucks have joined in recent ALBA celebrations and are considering sourcing from ALBA farmers.

Still, the staff lunches mirrored a bit of contradiction. Brett Melone, ALBA’s Executive Director, ate a homemade salad of cabbage, carrots, cannellini beans, and cucumbers. Followed by a peanut butter and jelly sandwich. Nathan Harkleroad, Farm Incubator Program Manager, ate beet chocolate cake he baked himself. He told me he usually he eats a burrito from a place down the road, as do many of the farmers training at ALBA. They also supplement lunch with their own vegetables and fruits, anticipating the day when the taco trucks would feature their own produce.

It was Gary Peterson, ALBA’s Deputy Director’s lunch that worried me most.  He had (organic) ice cream at staff birthday party, chased by a handful of (organic) blueberries and (organic) almonds. He was the one who looked desperately for the exit when I brought up my topic. He sits at a computer far too much. I wished an intern would cook for the staff.

Later in the day we met Tony Serrano, the charismatic and impressively expert General Manager of ALBA Organics, who toured us around the fields. I didn’t immediately ask him about his lunch. Tony grew up in a farm worker family, migrating around the state picking strawberry fields until his parents’ small farm collapsed. Now he’s a towering figure at ALBA, and has helped the organization double its capacity since he joined in 2008.

After walking the rows and meeting farmers at the 110-acre Rural Development Center farm, we hopped into Tony’s truck and bumped on dusty roads towards the 95-acre Triple-M farm to get the whole picture of their operations. After a few minutes of talking, Tony confessed: he’s addicted to soda. He knows it’s evil but it’s a habit that’s hard to kick; he drinks it all day long. On the bright side, he arranged for ALBA to provide fresh carrots to his kids’ middle school. After the school bought his carrots, his kids were suddenly proud of their dad’s work. The carrots made him a mini-celebrity at the school and now his daughter is considering following him into farm management.

Touring the Triple-M farm as the sun set, we enjoyed a strangely wonderful combination of bodega-purchased beers, vine-ripened blackberries, and golden raspberries. With Tony, we strategized dinner in Salinas, primarily to avoid traffic in the three-hour drive back to Oakland. Our options were slim and there were no vegetarian choices, no sustainably raised meats, few vegetables, and only unsustainable seafood.  Maybe a few years from now a restaurant there will feature ALBA’s produce. We’d eat there together someday.