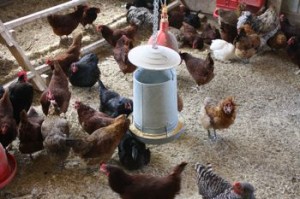 This isn’t your typical egg farm. In Elkhart, Iowa, about 70 miles south of Wright County Egg–the mega-farm at the center of a 550 million egg recall tied to almost 1,500 Salmonella illnesses–colorful hens are milling around Foxhollow Farm. Lyric-less rock music is playing in the hen house, and it’s for the hens. The head rooster, a five-year-old Black Cochin Bantam named Shadow who appears to run the place, is friendly and strutting for the camera.

In many ways, Foxhollow Farm represents the antithesis of large-scale egg production in Iowa, which produces more than twice as many eggs as any other state.

Foxhollow has about 200 laying hens. Wright County Egg, one of the top 10 egg producers in the country, has millions. Foxhollow allows its chickens to roam, following Animal Welfare Approved guidelines. Wright County Egg uses battery cages, a practice animal welfare activists are trying to ban. A dozen Foxhollow eggs will run you about $4.50. Wright County Eggs, sold under more than a dozen labels in more than 20 states, are closer to $1.

And then there is the issue of transparency. Despite numerous attempts, this reporter and the Iowa Egg Council, were unsuccessful in finding a single large-scale producer willing to give a tour or in-depth interview on egg production and the new Food and Drug Administration egg safety rules. Tai Johnson-Spratt, who runs Foxhollow Farms with her husband Thomas Spratt, offered a tour with less than a day’s notice.

Well under the 50,000 bird cut off, Tai’s farm doesn’t have to follow the new FDA egg regulations, but she’s actively managing chicken health and food safety.

“They don’t get sick unless something tragic happens,” she says. “We don’t usually have a problem with disease. I think the fact that they can go outside and do what they want to–we have dust baths, we have nest boxes, we have enough perch space–is important, they can express they’re natural behaviors. They’re doing what chickens do.”

If a chicken shows signs of illness, it is taken to the Iowa State poultry extension for a diagnosis. Drugs are administered only at the advice of Foxhollow’s poultry veterinarian. 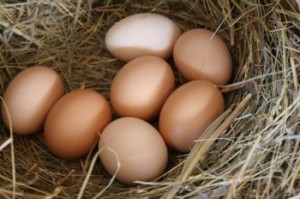 Salmonella is much trickier to control, because birds do not show symptoms. The hatcheries are monitored for Salmonella, explains Tai. “All the hatcheries are supposed to be 100 percent pullorum-free, which should prevent Salmonella from reaching anybody’s plates, but that’s not always the case,” she says, because the bacteria can creep into a poultry house on the farm.

“You can get Salmonella from a bird flying over, from the feed, in the water–it can come from anywhere,” she says. Foxhollow manages pests and keeps its facilities clean. Tai also believes that giving the birds space is the best way to prevent disease from spreading. “In confinement, if one gets sick, they all get it.”

Foxhollow collects eggs three times a day and refrigerates them right away to stop any bacterial growth. The eggs are then sanitized and refrigerated until they reach the consumer. Tai has an Iowa egg handler’s license and she takes her keeping-the-eggs-below-40-degrees duty seriously. “We do things the way we’re supposed to,” she says.

When asked about the big producers upstate, Tai simply says: “There’s a lot better ways to do it. This takes a little more room, a little more time, a little more effort, but what you get out of it–these chickens are happy, they have everything they need, and it’s not much.”

“I think part of it, though, is that consumers aren’t educated about where their eggs come from,” she adds. “People think all brown eggs are farm eggs. That’s not true. People think all eggs are the same. That’s not true. Taste one of mine, taste one of DeCoster’s; you’ll see right there–even if you don’t cook it–just look at it. Look at the yolk. Mine are orangey, theirs are pale yellow.”

Though Foxhollow can hardly keep up with demand for its eggs–and its heritage chickens and turkeys–the farm represents only a tiny, though growing, fraction of Iowa’s poultry industry.

Foxhollow sells somewhere in the neighborhood of 3,600 dozen, a little more than 43,000, eggs per year. Iowa produces 14.25 billion eggs per year, according to the Iowa Egg Council.

Tai admits cost also has a lot to do with it.

“If people are used to getting eggs for 99 cents, why do they want to spend $4.50 for mine? There’s a lot of value in my eggs; they just don’t see unless they’re educated about it.”