Dispatch from the Eat Real Festival in Oakland, CA 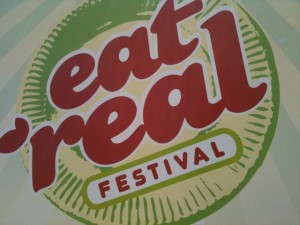 There are plenty of end-of-summer activities to take part in this time of year, trying to squeeze in that last stay-cation before fall descends. But for two years now, those of us here in the Bay area whose lives revolve around food more than, say, Burning Man, find salvation, and company, in the back-to-back food festival fun of SF Street Food and Eat Real. This year I caught up with Susan Coss, Director of Eat Real 2010, who filled me in on some of the reasons this food event continues to charm us all.

CE: How is this year different from last?

SC: Well, first of all it’s twice as big as it was last year. We have about 90 food vendors this year between the street food vendors, our craft collaborators and our urban farmstand cook stations, so a ton more food and like three times as much programming. This year we have four different stages that people are working off of and we’ve got a lot more hands on intensive workshops and food skills training. It’s just amazing and at the same time pretty mind-blowing.

CE: How are the participant’s selected and what is the tasting process like?

SC: We ask people for a sample of what they think their top items are. Sometimes there are three people involved in the tasting process, other times it’s the whole staff, it just depends on how we can get the most people to the same place at the same time. We pretty much just ask ourselves how does it taste? Where are the ingredients coming from? And we like to give feedback to the prospective vendors as well. We think we know our participants and the audience, so we want to be sure that they are bringing a product that they are going to sell through.

CE: Is the sourcing a big component of the selection process?

SC: It’s the whole package. We can really work with our vendors if they need to be sourcing a product that’s a more local and we can always help them work with farms. For example, we sourced a product through the Thumbs Up Growers Collaborative with CAFF, which is working with small and medium sized farms to really find a market and points of distribution. That was great because their distribution point is only located about three blocks away from Jack London Square. We also established a process with Del Monte Meat Company which works with Mary’s Chicken and Niman Ranch which enabled our vendors to get meat from there too. What we’re really hoping for is that the vendors will be encouraged to switch to these products after seeing that they worked at Eat Real and the consumer liked it. And the other exciting thing is being able to introduce the different vendors to one another and get them working together, which is what the craft collaborations were all about. Being able to put a Blue Chair jam with Bohemian Creamery cheese or creating tamales using Llano Seco pork and Queso Salazar cheese. Hopefully going forward, they can use each other’s products and create a regional food system that supports the local economy.

CE: Last year’s theme was street food and this year is more about craft?

SC: Yes, this year we are really talking about craft and what craft food means: that it requires a certain amount of skill and training and working with that food to create an amazing product. We are seeing an explosion of regional food producers here in the Bay area and this is a great way to really highlight why it’s important to be buying their jams or their cheeses and really honoring these types of producers that are out there. We are at a point that while there is an explosion of people that are interested in this, at the same time there needs to be a market that supports them and an infrastructure and platform that can launch new products. Big food companies have that opportunity all the time but the smaller guys don’t, so it’s wonderful to be here and help them with that. On top of it, we have this whole urban homesteading theme too, so on one hand we have these local food producers that are doing great things and then you also have these people who are just really interested in doing it themselves. We want to encourage people to take control of their own food, put it into their own hands, be their own picklers, be their own jammers.

CE: Eat Real seems to be promoting the idea that small food ventures can be financially viable, have you seen examples of the festival having a lasting affect on vendor’s businesses?

SC: Well I think, especially with the craft vendors this year, it’s new, and so I don’t think we have much traction yet. I do know that last year, some of the new businesses that launched at Eat Real are still around today and they’re going strong. You look at someone like Liba Falafel and she has hired one full time employee rather than just running the truck herself and having the occasional help. And she’s now looking at how she can open a brick and mortar restaurant. A great success story.

CE: Do you feel like Eat Real is a trendsetter?

SC: We would definitely like to be trendsetters and not trend followers, and just to be able to put on an event each year that piques people’s interest more and more in food and finding different creative ways to pull people in. Our goal remains the same every year. Our new line is Eat It, Make It, Grow It – it doesn’t have to go in a linear order like grow it, make it, eat it, because that isn’t really the point. It’s whatever you want to do and we’ve got it all!

CE: Is Eat Real going on the road?

SC: Rumor has it that we are going on the road. We’re looking in 2011 to add an additional location and it’s looking like that location is going to be L.A.

Here are some highlights from Sunday, August 29: