After the Egg Recall: Now What? | Civil Eats

After the Egg Recall: Now What? 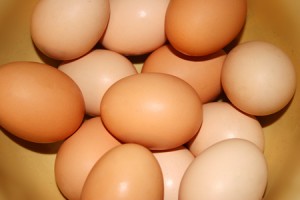 Picture this: three long-haired college kids are unloading crates of food from the bed of a battered pick-up truck. It’s parked curbside at the Androscoggin Food Co-op located in the equally battered mill town of Lewiston, Maine. The year is 1971 and these kids are, unbeknownst to them, the vanguard of the local food movement.

They’ve spent the day rounding up goods directly from local farms and food processors, not because they’re devout locavores (the word wouldn’t be invented for another 35 years) but because sourcing locally was the cheapest way to get food for a co-op whose members were largely lower income. Some crates are full of apples from a nearby orchard; others contain 12-pound wheels of a so-so cheddar from a small cheese plant; and one cardboard box contains 30 dozen eggs from a chicken farm only 10 miles down the road. That box is labeled DeCoster Farms.

Yes, the product of this family egg farm (now headquartered in Iowa) at the eye of the current salmonella storm was being handled contentedly by these prehistoric foodies, I among them. As a company that was started with 125 hens in the mid-1960s by Austin “Jack” DeCoster in the farm town of Turner (pronounced “Turna” by everybody except out-of-state college kids), it was as local as you could get.

Funny how times change. Jack, now 71, was an ambitious man who wasn’t going to be happy selling locally produced eggs just in northern New England. According to one DeCoster employee, Jack is a born-again Christian who doesn’t engage in any leisure pursuits other than work, which he apparently pursues 18-hours a day. With a work ethic like that, growth was inevitable. Now operating under the names of Wright County Egg and Quality Egg, Jack’s egg empire now produces 2.3 million dozen eggs a week in Iowa while his “starter” farm back in Turner, renamed Maine Contract Farming, keeps 3.5 million hens gainfully employed.

But Jack paid a steep price for getting big and going global. Though town folks in Maine and Iowa love the jobs, huge property tax payments, and Jack’s “community mindedness” (new playgrounds and all the free eggs you can eat at local fundraising breakfasts), they are less than sanguine about the factory farms’ legacy of pollution, labor abuse, and animal cruelty. In 1994 the State of Iowa fined DeCoster for environmental pollution and designated the business a “habitual violator.” Back in Maine DeCoster paid a $2 million fine in 1997 to the U.S. Department of Labor for egregious health and safety violations that led to then Secretary of Labor, Robert Reich describing the farm’s working conditions “as dangerous and oppressive as any sweatshop.” The federal Equal Opportunity Commission settled a $1.5 million sexual harassment suit brought against one of DeCoster’s Iowa operations in 2002. And again in Turner, as recently as June of this year, the State of Maine fined Maine Contract Farming $125,000 for animal cruelty. And now dirty eggs – 380 million of them are Jack’s – have been recalled following 1500 reported cases of salmonella poisoning (another Iowa producer, Hillandale Farms, not a DeCoster operation, was forced to recall 170 million eggs).

Had Jack developed some leisure activities earlier in life he might have become a relatively successful Androscoggin homey. But holding his personality traits aside, remaining a small egg business was probably not an option. Like other agricultural operations, “get big or get out” has been the driving reality. This has led to the egg industry’s consolidation with fewer but larger producers now controlling most of the egg supply in this country. That means, of course, massive egg-laying factories that often hold as many as 150,000 hens in a single warehouse, non-therapeutic use of antibiotics, and the production of Himalayan mountains of chicken manure.

For those of us who take refuge from the industrial food system by purchasing oddly sized and colored eggs packaged in a mish-mash assortment of cartons at a farmers’ market, or who are willing to pay $4 a dozen for certified organic eggs at Whole Foods, we have to be reminded from time to time that we are the exception. According to the New York Times, out of every 100 eggs produced in the US, 97 come from hens that are kept in tightly packed battery cages, 2 come from hens that are “cage-free” but always kept indoors, and just 1 from a “free-range” source where chickens can spend some time outdoors.

If the Jacks of the world rule, whether we’re talking eggs or eggplant, then how do we avoid the mischief that our industrial food system is heir to? Better government regulation and monitoring are the answers on the lips of many policy makers and consumer advocates these days. While there is always room to improve government efficiency – ending the divide between USDA and FDA food safety oversight is one obvious choice – I’m not confident that government can protect the consumer in an age of industrial agriculture. Our faith in science, technology, and regulatory oversight can be as misplaced as our trust in mega food and farm corporations. With tremendous resources at their disposal, our industrial food players are more than able to game the system. And in what could be the ultimate irony, the biggest violators often have the deepest pockets which positions them nicely to comply, at least on paper, with ever increasing (and costly) regulatory requirements. The little guy – the small farmer, the ones who are local and whom we know and genuinely trust – could be put out of business if a one-size-fits-all approach to regulation is implemented.

Perhaps there is another fear as well, one that we feel in our hearts more than our heads, but is nevertheless suitable for the 21st century. As the industrial food system becomes ever more dominant and government feels the need to escalate its authority, don’t we run the risk of sacrificing ever greater measures of our freedom and independence? Could the days of an all-powerful national Food Czar be far off? Holding aside the anti-government nonsense of the Tea Party, it is now possible to imagine food production being so remote and so beyond our understanding that we have no choice but to place all control and authority in the hands of a few food corporations and a board of government overseers.

A healthy antidote to this distinct set of possibilities, both in terms of food system control and human health, might come in the form of direct engagement by citizen-consumers in their food supply. For instance, there is ample room to educate ourselves about safe food handling, particularly if local school boards recognize the importance of (and fund) food education. The individual, after all, is the last and probably best line of defense against salmonella and other food-borne bacteria.

What about raising our own chickens? The backyard poultry movement may be even bigger these days than the Tea Party, and certainly more useful. A dozen hens can provide all the eggs that several neighborhood families could eat in a week and provide a lot of education and fun (a leisure pursuit, Jack?) along the way.

And what about food democracy? Food policy councils now exist in over 100 cities and states and are beginning to shape the direction of their local food systems. To support the backyard poultry movement, for instance, councils in places like Cleveland, Chicago, and Missoula have passed chicken ordinances which make it legal, easy, and safe to raise a few hens on city lots and in backyards.

Clean hands on sanitized cutting boards, building our own chicken coops, and bringing our voices loud and clear to city hall offer us a distinctly brighter set of possibilities than the prospect of ponderous bureaucracies locked in mortal combat with resistant food corporations. And who knows, maybe today’s clean-cut crop of college students could organize and stock the next wave of co-ops with authentically local food. The good old days may be coming back, but this time they could be even better.