USDA/DOJ Livestock Hearings Were a Success. Now What? 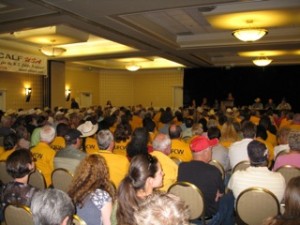 Last Friday, August 27, USDA and the Department of Justice hosted the fourth in a series of historic workshops on corporate concentration and lack of competition in agriculture; this time the topic was livestock. With more than 500 ranchers, farmers, workers, and concerned consumers turning out for an evening public forum and an estimated 2,000 people in the audience the next day for the official hearing, it was a chance to generate some long overdue public attention on the vital issue of who is in charge of our food supply.

Four companies process 83 percent of U.S. beef—that’s four out of every five beef cattle. It’s the same story with pork, where four companies process 66 percent of the pigs. This type of market domination leads to price manipulation that discriminates against small-scale farmers and ranchers, increased risk of food contamination, and the continued loss of small farms throughout rural America.

This is what the livestock hearing was all about: a chance to air these grievances to U.S. Department of Agriculture Secretary Tom Vilsack and U.S. Attorney General Eric Holder. I was there to represent Food & Water Watch and we teamed-up with groups like the Western Organization of Resource Councils (WORC) and Ranchers-Cattlemen Action Legal Fund (R-CALF), who rallied their members to attend the hearings.

In his opening remarks, Vilsack said he was “deeply concerned” about the impact consolidation is having on rural America and if the number of meat processors, feedlots, and producers continues to shrink, “consumers will suffer as well.” Unfortunately, consumers are already taking a hit in their pocketbooks, health, and ability to have real options to choose from when it comes to buying food. 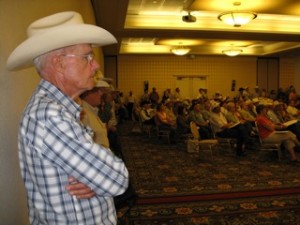 That last one is something that’s really been driven home recently–that consumers are impacted by consolidation too. When a handful of giant meat companies dominate the market, they make the decisions about how, where our food is raised–and by whom. These decisions do matter. Issues like using hormones and antibiotics to raise livestock, or feeding them genetically modified corn are too important to be left to the four agribusiness giants that control the meat industry. As the recent recall of eggs has shown, if a large processor compromises on food safety, the risk they choose to take affects huge numbers of people and just because there are a lot of different labels on the packages, doesn’t mean those products actually come from lots and lots of different producers.

The question everyone is asking now is: What’s next?

A hearing in Washington, D.C. in December will be the culmination of this series, and the topic is the consolidation of retail, an important driver of the bad economics that have changed our food system–literally from farm to fork. After this final hearing, we need USDA and DOJ to take everything they’ve learned over the course of this year and make real change. Hopefully, they will move a lot faster than the agency’s track record to date.

Congress enacted the Packers & Stockyards Act in 1921 to address market manipulation, price fixing, and other unfair practices in the meatpacking industry.  But almost 90 years later, the USDA has never really enforced it. The 2008 Farm Bill spelled out how the USDA should apply the law’s provisions to livestock markets–they basically instructed the agency to define what is unfair.  Once they define what is unfair, then the agency can finally take action against the companies who engage in unfair practices. Finally, this June, USDA proposed a rule to define how they can use this almost 90-year-old law.  Predictably, the meat industry reacted strongly, unleashing a wave of criticism on the Hill, in the ag media, and at the hearing in Fort Collins last week.

We now need to make sure USDA follows through and finishes this long overdue rule.  It’s something the agency can do without waiting for the hearing process to end, and it would be a huge first step toward addressing the challenges faced by independent farmers and ranchers that we heard about in Fort Collins last week.  You can tell USDA not to waste any time and finish the rule on fair livestock marketing practices.