Justice on the Range | Civil Eats

Justice on the Range 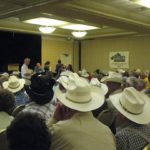 An over-capacity crowd packed into the Ft. Collins, Colorado, Marriott last night for a spirited town hall about the impact of corporate concentration on the livestock industry. Extra chairs had to be brought in and the room’s dividing wall removed to accommodate at least 350 people, many in cowboy hats, who are in town for today’s Department of Justice/USDA workshop on Agriculture and Antitrust Enforcement Issues in Our 21st Century Economy, this one focused on livestock.

The evening started with a panel including a cow/calf operator, a labor leader, and other ranchers. Patty Lovera of Food and Water Watch brought in the consumer angle and made the connection between consolidation and food safety—much like she’s been doing on many major news outlets this week, talking about the massive egg recall. Bill Bullard, CEO of the independent cattle union R-CALF talked about the crisis in the livestock industry and brought the crowd to its feet with his calls for change.

Dozens of people made statements, many in preparation for the public comment period at today’s workshop. Comments came from farmers, ranchers, farmers’ market promoters, local food advocates, workers from Kentucky, a hog grower from Minnesota, a young woman who works on aquaculture projects in Denver, a food justice activist from Chicago, a consumer concerned about food safety, a Missouri sociologist, and many more. Speakers came from the Dakotas, Nevada, Wyoming, Montana, Kansas, Wisconsin, Alabama, and Virginia. They talked about their struggles on their farms, struggles with corporations, and many years of struggles with the government, trying to get enforcement of laws that would give all producers – not just big ones—a fair shake in the marketplace. And they talked about unity and solidarity—“worker and farmer cooperation like this country has never seen before!”; engaging everyone “from farm to fork”—and working together all across the food chain to demand the change we need.

They’re all speaking out to government officials on these same themes at the Justice Department workshop today; you can take action too, by telling USDA to enact proposed new rules that would restore fairness to the livestock industry. Send a brief comment here, and feel like you’re here with us in Fort Collins! For background on the antitrust workshops, see my series Bust the Trust to Take Back Control of Our Food and my report from the dairy workshop in Madison, WI. Also, take a look at our video series Who Controls Our Food? Check back next week for more about today’s workshop; the government reports that over 1200 people have registered, so they may find themselves bringing in chairs and moving walls as well.