Hospital Food Gets A Makeover 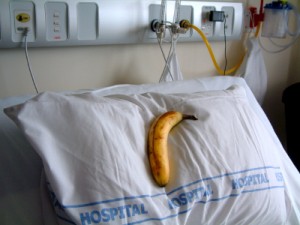 Unfortunately I can report from recent personal experience that in some facilities hospital food remains truly awful. If you’ve been in a hospital this will likely not be news to you. A couple of in-patient visits over the past few months have given me an up-close view of what gets served to the sick during a hospital stay, which averages around three days for most folks dealing with an acute health problem.

It’s not pretty, people. By that I mean the food looks bland and unappetizing. The eggs are gray and watery. The vegetables limp and tired. There’s the ubiquitous Jell-O cups. At one hospital I was in the meals came served on sickly salmon-colored trays. Don’t get me started on the odor.

I took one look at what was on offer (as an E.R. admission, I hadn’t had a chance to choose my own food) and pushed it away. So while it looked and smelled terrible, I can’t tell you how it tasted because I couldn’t bring myself to bring the food to my lips.

It wasn’t that I wasn’t hungry. I knew good grub was on its way.

My friends didn’t disappoint. Lucia showed up around breakfast time showered, though not well rested, since she’d been sitting in the E.R. all night with a certain someone. And she’d still managed to bring savory scones that I nibbled on with a cup of tea and orange juice. Margaret swung by a little later with lunch: Creamy quiche from a local cafe we frequent, along with a side of spring greens. It was the kind of food that said: “eat me.”

Okay, I know, I’m spoiled. Sometimes when you’re sick though—hell, I’d venture to say especially when you’re not well—having something healthy, comforting, and aesthetically pleasing to eat is critical.

Why is it then that most hospital food is bad, in the way that prison, airline, and school food—basically any meals made on an epic scale in an industrial setting—typically suck?

It’s crazy when you think about it: Hospitals, the very places we go to to cure what ails us, should be the beacon of wholesome eats. Yeah, I know, dream on.

But wait, in pockets of the country hospital food is getting a complete makeover. Once I started to heal my friend Lucia encouraged me to give hospital food another chance and check out the improvements made by leaders in the hospital food movement who want to feed sick people and hospital employees well.

That’s because aside from being a good friend and E.R. companion, Lucia Sayre co-directs the San Francisco Bay Area Chapter of Physicians for Social Responsibility. A big part of Lucia’s job (read more about her in this Berkeley Bites post), is to work with local hospitals to source, prepare, and serve better food to patients and staff.

Lucia’s not one to seek the public eye or boast about her success. She just told me to go meet her hospital food buddies.  Since I trust the girl, I did.

Alison Negrin turns out to be a powerhouse in a growing movement to give hospital food a complete makeover. The tiny dynamo, who reminds me some of another institutional food advocate, Ann Cooper (aka The Renegade Lunch Lady), works as the executive chef for John Muir Health, which has campuses in Walnut Creek and Concord, east of San Francisco.

That’s right: Some hospitals—not very many mind—actually employ chefs. And Negrin comes with a culinary rockstar pedigree: She did a stint at Chez Panisse before she went on to open Bridges, a Japanese-influenced restaurant in the East Bay town of Danville, lauded by local restaurant critics. She followed that success with a turn at the stoves at a fusion bistro in Berkeley called Ginger Island.

But she tired of the demands of being a fine-dining chef and started to explore the concept of food as a healing tool. She studied alternative therapies, taught cooking skills to at-risk teens, and attended Bauman College in Berkeley, a learning center with a holistic approach to nutrition. When the hospital chef gig came her way about 10 years ago, she jumped at the challenge.

In the past decade she’s brought about a slew of improvements to the food that gets dished up at John Muir. More local produce sourcing, smaller batch cooking, an emphasis on whole grains, and sustainable meats—not to mention a chef’s eye for plating and a total menu overhaul.

But unlike in her own restaurant kitchen where she could mix things up on a moment’s notice, change moves very slowly in a hospital setting. She has to deal with dietary restrictions and purchasing contracts. It can take three years, as one writer noted, to alter a soup recipe. (For an excellent analysis of the challenges faced by the folks who want to fix hospital food, I recommend readers take a gander at this story by John Birdsall in the East Bay Express.)

I met with Negrin a couple of weeks ago in the Concord medical center’s Diablo Cafe for hospital staff (the word cafeteria seems out of vogue). She invited me to join her for lunch with her colleagues, including Sandi Rigney, the hospital’s food service director, and Patty Campbell, the lead dietician there.

Despite having unpleasant hospital flashbacks once employees in scrubs started piling into the place, I agreed to eat with the trio, who proved perfectly pleasant lunch companions.

What surprised me was the food. A fresh spring salad mix with dried cranberries, cheese, and nuts. Sweet potato fries with grilled Mahi Mahi served with a mango salsa. Vital Vittles whole grain rolls. Here was some hospital food I could happily eat.

Don’t get me wrong, the cafeteria still serves pizza, coke, and other food you don’t expect to find in a facility treating people with heart, kidney, and other health problems. Change comes very slowly, even in institutions allegedly built to keep us well. But I was heartened to find that people could make healthy choices—and plenty of them for lunch or dinner.

And I had the opportunity to watch in-patient food going out on trays. There was nice attention to detail: One worker served up small batches of striped ravioli with a tomato sauce; sprigs of watercress and a mix of cheese and herbs would also wind up on the plate. But in another area a kitchen worker opened a massive bag of pre-cut green beans that could hardly compete with what’s on offer at local farmers’ markets right now. Clearly, there are limitations on what hospitals can do in food service.

But that doesn’t mean Negrin isn’t going to try.  She’s introduced no-fry Mondays in the cafe and employees can now pick up a weekly CSA box of produce. She sources some produce from the local community. She’s slowly but surely revamping every hospital menu. Three days of the regular patient menu have been completely overhauled, the remainder of the days are expected to undergo scrutiny before the end of the year. 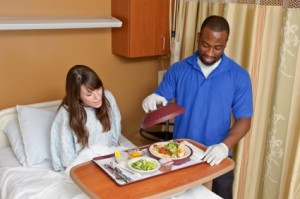 I left the building feeling hopeful that a revolution in hospital food is possible and that bodes well for sick people and those who take care of them.

Update: While Negrin would be the first to concede that there are limitations to what a chef can do when it comes to hospital food, she wrote an email to let me know this: “FYI our green beans (and all vegetables) come in bags after being cleaned and cut for us.  They are still sourced locally and picked fresh—just packed that way.”