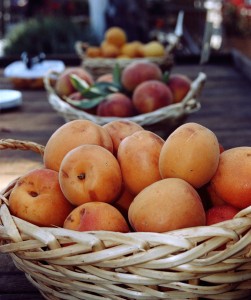 Whether you are a home gardener preserving tradition, an ecologist maintaining bio diversity, an activist protesting industrial ag, or a foodie in search of distinctive flavor, there are plenty of reasons to save, support, and savor “heirloom” varietals.  Controversy surrounds the meaning of the word “heirloom” itself; some contend that it refers to a cultivar that has been propagated for a certain length of time, while others cite a requirement that the varietals must have been passed down through generations within a family.

Like the fruit itself, any blemishes on the surface of these “heirloom” varietals pale in comparison to the unquestionable benefits that we can easily agree on: these edible treasures bear a connection to our shared history, preserve genetic diversity, and reveal incomparable flavor. Sadly, relentless development and economic and industrial ag pressure have greatly reduced the old stone fruit orchards of the Santa Clara Valley and the Gravenstein apple orchards of Sonoma County. With that has come a dramatic loss for countless families, communities, and the varietals themselves.

Join us for the next Kitchen Table Talks in San Francisco on Tuesday, August 31, where we will meet a some of the stalwart growers, producers, and nursery folk who dedicate themselves, against the odds, to preserving what remains. We will also be tasting the unique fruit of their labors, including apples, peaches, plums and the “poor man’s banana.”

Joining us in conversation will be Terry Harrison, who founded the Sonoma Antique Apple Nursery (now Trees of Antiquity) in 1980 with his wife Carolyn. Starting with 20 varieties that Terry’s mom and dad liked, it eventually blossomed after 22 years into more than 100 heritage apple varieties and 25 varieties of pear trees. They are proud to have helped preserve many rare varieties by selling thousands of trees throughout the U.S. Terry is a former member of the board of directors of California Certified Organic Farmers (CCOF), and is currently the President of the North Coast Chapter of the Community Alliance with Family Farmers (CAFF).

Bryce Austin of Austin Heritage Ranch is proud to be farming part of the same land that his great grandfather homesteaded in 1862. Now called the “French Orchard,” it includes over 200 trees, among them rare prune, apricot, and fig trees—among many others. His spectacular fruit, from his unique orchard at 1,000 feet elevation, can be found at the Healdsburg Farmers’ Market on Tuesdays and Saturdays.

Casey Havre is a fourth generation Californian who preserves the recipes and traditions of her Gold Rush ancestors. After years of gleaning, canning, and sharing the bounty of each season with her friends and family, she created Loulou’s Garden, a small company dedicated to producing entirely hand-made jams, preserves, and pickles. She and her husband John Lagier split their time between their organic farm, Lagier Ranches, in the San Joaquin Valley and Casey’s family’s house in Calaveritas, a legendary ghost town in the Mother Lode.