Reviving Anarchy For The Sake Of Sustainability | Civil Eats

Reviving Anarchy For The Sake Of Sustainability 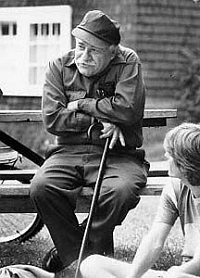 One thing that fascinates me about political theorist Murray Bookchin’s writing is how prescient it is. His essay, “Ecology and Revolutionary Thought,” was written in 1965, six years before Earth Day, and almost a half-century before now. Yet its content is as relevant as ever, if not more so, given society’s increasing interest in all things “green.” Bookchin even references future ramifications of climate change, long before many had even considered it.

I don’t agree with everything Bookchin has written. To start, he believes that due to technological prowess, we are entering a “post-scarcity” era of humanity—the idea is reflected in the title of the book this essay appears in, Post-Scarcity Anarchism. Still, “Ecology and Revolutionary Thought” convincingly describes how important the rethinking of human organization (i.e. politics) is, given the urgency of our environmental crises. And, similar to an earlier philosopher Peter Kropotkin, Bookchin looks to the teachings of natural systems to illuminate better approaches to our social relations. Without reworking these economic, political, and cultural standards, sustainability will continue to vex us, no matter how many local farms and solar arrays we build.

We begin, as always, with the problem:

“Man has produced imbalances not only in nature, but, more fundamentally, in his relations with his fellow man and in the very structure of his society. The imbalances man has produced in the natural world are caused by the imbalances he has produced in the social world. A century ago it would have been possible to regard air pollution and water contamination as the result of the self-seeking activities of industrial barons and bureaucrats. Today, this moral explanation would be a gross oversimplification. It is doubtless true that most bourgeois enterprises are still guided by a public-be-damned attitude…but a more serious problem than the attitude of the owners is the size of the firms themselves–their enormous proportions, their location in a particular region, their density…their requirements for raw materials…and their role in the national division of labor.”

I would add that, given Capital’s imperative to grow endlessly, maximize profits, and “race to the bottom” (for the cheapest wages, the most easily exploitable resources), the owners of industry can almost be expected to make these damaging choices. But, regardless of the reason, it’s clear (and has been for quite some time) that this status quo just can’t go on. 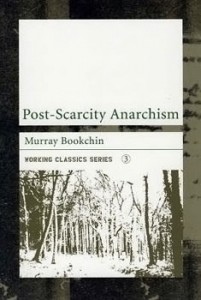 People have been pointing out the environmental problems of industry since industry’s beginnings. Yet, approaching the problem through conventional politics hasn’t gotten very far. We haven’t been able to legislate our way out of climate change, nor have we even mitigated some of the more solvable effects of industrialized society, like water pollution from agriculture. Most people hold onto the idea that it is merely the regulatory agencies, or the particular political party in power, that are to be held accountable for this, but perhaps the state itself cannot save us?

People (in the U.S. in particular but the world over as well) have lost control over government, which means a loss of control over the economy and its negative effects. In our “democracy” of corporately-funded elections, ubiquitous lobbyists, an impotent when not sycophantic mainstream media, and an (understandably and increasingly) cynical, jaded electorate, can we expect to regain control of the government, as it currently is structured? Perhaps the healthy function of government, like that of industry, is corrupted by aspects inherent to its top-heavy design. The ecological appropriateness of industry should be decided by the communities impacted by that industry, not by the industries themselves or a weak, distant, unaccountable government.

Bookchin essentially points to a more anarchist political structure as a precondition for sustainability. We need decision-making to be more decentralized and localized. We need to support diversity in all its forms, especially human cultural diversity. We need to have local conditions and citizens determining the answers to important questions of economic governance.

Unfortunately, these sorts of (anarchist) solutions have long been denigrated for being unrealistic or romantic. Humans, it is argued, are inherently self-serving, and without a centralized government keeping us in check, society would degenerate in chaos and violence. Anarchists are seen as naively expecting more pro-social and self-organizational behavior than exists or is possible in humanity. This main point of disbelief—that anarchism is based on an idealistic notion of human ‘nature’—is easily argued against, with various realms of hard and soft sciences (developmental psychology, evolutionary biology, cultural anthropology, among others) supporting the existence of a nuanced, and ultimately culturally-dependant human ‘nature,’ and not just one limited to selfish, egoistic, atomistic and maximizing behaviors. Still, there are real, physical limits to these ideas, especially in the realm of agriculture (the foundation of any society). At some point, extremely localized production of any physical necessity can become a liability if that production is at all compromised. How great is a local food system if it fails to produce enough food in suddenly tough environmental conditions?  This problem of decentralized organization for ecological sustainability—that localizing can’t solve everything—is an important one.

What this points to is the need for the integration (in our food system, our politics, and in general) of other ecological concepts—like that of interdependence. We’d need other communities and their support in a drought-caused famine. We’d also need to avoid parochialism, possibly through the establishment of networks that transcend our local boundaries; the federation of local bodies into larger councils would be a key aspect of a more localized political future. “Sociocracy,” a decision-making structure based on associated, connected groups, rather than individual “citizens,” provides a format by which to do this, and has been proven effective, mostly in a context of for-profit business.

People’s actions can be examined as expressing a search for a more connected and locally controllable future. People in the food movement are wont to share, connect, and establish local resilient mutual aid networks—as described by Kropotkin in his early anarchist writings. Rebecca Solnit’s new book, A Paradise Built in Hell, illustrates the hidden but ever-present undercurrent of pro-social tendencies, occurring across myriad cultures and circumstances, which emerge particularly in times of disaster and crisis. Considering the ecological disaster as one long-term crisis, couldn’t we consider restructuring society to not only “save the planet” but also support the full development of our positive humanity? We could make this world a reality, but currently seem to lack the required imagination or confidence to do so.

Once we get past our doubts about ourselves, and the belief that we cannot self-govern, then all that’s left to do is craft and implement a structure for self-governance. We don’t lack models for this way forward. Organizations like the Community Environmental Legal Defense Fund innovate across the country with legal and political campaigns that assert the right to local self-governance. We should integrate these ideas into our work, join together with others, and fight smarter and harder against the structures and institutions preventing us from reaching sustainability.