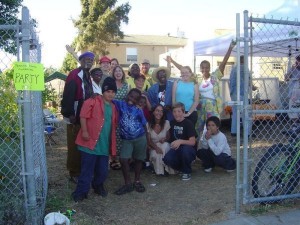 Just around the corner and down the street from where I live on a stretch that includes liquor stores and the dodgy characters who frequent such places, you’ll find Spiral Gardens, a slightly disheveled verdant oasis on a fenced in corner of a formerly empty city lot.

It’s a welcome addition to the neighborhood. For the past six years in this location, the community food security project has developed a four-pronged approach to reaching low-income residents, particularly people of color, on the southwest side of Berkeley. The nonprofit is home to a nursery chock full of edible starts and trees, culinary and medicinal herbs, and California native plants for folks who want to grow their own food. Nursery sales help fund other programs the group offers.

Across the street the urban garden center’s community farm is full of summer bounty, such as tomatoes, greens, and amaranth, in one large collective plot that everyone works on together. Around half the harvest is given free to people in need, such as the homeless and elderly, the remainder is distributed among the volunteers who help the garden grow. There’s a pen with chickens and ducks too.

The organization runs the cheapest produce stand in town; every Tuesday afternoon it offers organic greens, fruit, eggs (supplied by a local jewelry store owner who raises hens), and such from the usual farmers’ market suspects at cost. Note to local readers: The stand serves all comers and appreciates those of means rounding up or kicking in a little extra to support the program.

And on Sundays the nursery-garden provides ongoing free farm classes, such as how to grow food in an urban setting, cooking produce from the garden, and beekeeping for beginners.

Daniel Miller has served as the executive director of this worthy edible experiment for 16 years. It is largely a labor of love. Miller is only paid a few months of the year, he supplements long days at Spiral Gardens with edible landscaping jobs and says he foregoes many standard accoutrements of modern life such as a home he can call his own, a car, and new clothes.

The 42-year-old father, whose Twitter handle describes him as “a gritty optimist dedicated to the compassionate reimagination of how we live,” resides in Oakland. We chatted at the nursery while Miller repotted plum trees.

1. Who are you trying to reach with this project? 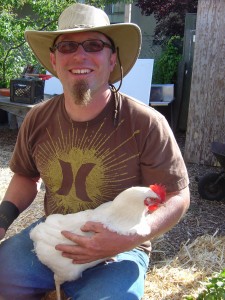 We believe everyone has a right to fresh food that’s good for you. Studies show that in areas where people lack access to fresh produce, sometimes called food deserts, there’s a higher rate of negative health outcomes such as heart disease, stroke, and diabetes. On average, poor people of color live 10 years less than those who have access to such food. Our target audience is the poor and hungry.

2. What are some of the obstacles you run into trying to reach your target community?

There are many. We have to first let people in the community know we’re here. We find doing door knocks and leaving fliers an effective way to get the word out. We also educate people about why it’s important to eat farm fresh food. Some people automatically think that organic food is too white, chi-chi, and expensive.

3. Do you feel like you’re making a difference in the neighborhood?

I do.  The farm stand is a positive, wholesome  presence that attracts people. I’m convinced we’ve lengthened some people’s lives. I know we’ve put a lot of plants out there in this community that will provide food for years to come. And we fill a safe, social aspect in the area, we give people something positive to do. I’ve seen people who are homeless, drug abusers, mentally ill, or with other severe obstacles to overcome benefit from our produce and programs — even start growing their own food.

Even in seemingly small ways we have an impact: Our heirloom tomato starts have become the impulse buy down the street at Biofuel Oasis.

With the downturn in the economy all kinds of people are showing up at Spiral Gardens. People are really struggling and there’s an increased interest in growing and making your own food.

4. What are the rewards of this kind of work?

I’m proud that we exist. And that every day we’re doing something to help people eat well and grow food that has a positive impact on their health and environment. I think any time you can get people to interface with soil, which we all need for our survival, that’s a good thing. We have a dozen or so hardcore volunteers who water the plants, weed the farm, feed the animals, and generally keep everything going, though on a farm project day 50-100 people may show up to help. We’ve cultivated a great sense of community.

5. Are there any local food activists you admire? 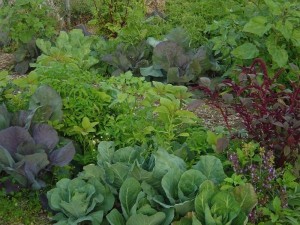 The people who live at Fort Awesome, which is located not far from here. It’s a collective house with solar panels, graywater recycling, an urban farm with fruit trees and chickens. It’s across the street from my son’s school, sometimes when I drop him off I’ll see a wayward chicken crossing the street.

6.  What’s next for Spiral Gardens?

I’d like to see the nursery expand — it would be great if we could be a full-service, one-stop nursery, selling people their soil when they pick up their plants. I’d also like us to become completely self-sustaining. And it would be great to get paid for what we do. I want to offer more classes and serve more people in need. There’s always more we could do, it just takes resources.

This post also appears on Berkeleyside and Lettuce Eat Kale