Fish Out Of Water: A Review of Four Fish: The Future Of The Last Wild Food | Civil Eats

Fish Out Of Water: A Review of Four Fish: The Future Of The Last Wild Food 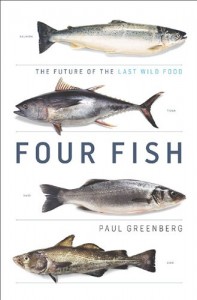 Paul Greenberg would have had one less chapter to write in Four Fish: The Future of the Last Wild Food had fellow author Mark Kurlansky’s 2000 best-seller Cod caused a swift change in the way cod are harvested today. Although Kurlansky provided crucial information about the deleterious effects of industrial fishing, we left the responsibility of change to others. Greenberg is now attempting to revive the “bad human behavior of former times” to consciousness. His Pollan-esque investigation into our food chain—by way of salmon, sea bass, cod, and tuna—is as much an exposé on the fishing industry as it is a comment on “Modern” man’s desire to rule a larger food chain than was intended for him.

Recent technological advances have allowed us to see enormous potential for fish domestication. But “just because we can tame a fish,” Greenberg says, “doesn’t mean we should.” The fundamental problem with our relationship to the sea is that we view it as abundant and “free of charge.”

It is not shocking that Greenberg’s 4 investigations into industrial fishing and fish farming speak to the same sustainable concerns that infect the meat industry (scale, ecology, humane treatment of animals, to name some). But by nature of the fact that we still eat wild fish, the concern with large-scale fishing and fish farming goes beyond the system itself. Wild fish are wild animals. That distinction is important to Greenberg, who views declining fish populations as something akin to man’s contest against his own gluttony. “We are now deliberating over whether fish are wildlife—wildlife that is sensitive to our actions and merit our sound protection and propagation.”

The exploitation mapped in Four Fish points to human faults: consumers don’t want to be denied the freedom to choose what to eat; government subsidies and industry regulation are misallocated or absent, and an understanding of and respect for wild life systems has not yet been inculcated. To grasp the complex natures of the fish, Greenberg presents their interesting biological stories and historical relevance.

Salmon have strong genetics and are adaptable to new environments, but they need clean, oxygenated rivers to survive in the wild. Sea bass have a unique swim bladder which allows them to achieve a state of weightlessness when the bladder inflates with gas to keep the fish buoyant in lower depth waters. Their flesh is less muscular (and therefore lighter and whiter) because of this evolutionary aid. Cod, like bass, have lighter muscle tissue. They store oil in their liver instead of their flesh, which means that they are ideal fish to preserve. Tuna are highly muscular fish and require large amounts of the chemical ATP to keep their energy levels high. ATP converts into IMP after a fish’s death—its raw flesh rich with a chemical that produces the “fifth” sense or umami flavor so prized by Japanese culture. These fishes’ appeal has contributed to their decline.

Over the last twenty years, human consumption of salmon—farmed or wild—has doubled. In places like Turner Falls, Massachusetts, where more than 100 million salmon larvae once hatched in the Connecticut River, wild salmon now cease to exist there—a development that occurred in 1798 after a large dam was built across the river, blocking fish from making their trip home to spawn. As the waters of Greenland became packed with Atlantic salmon with no place else to go, Danes, Norwegians and Swedes furiously fished the waters throughout the 1950’s and 60’s, bringing the wild Atlantic species to commercial extinction. The memory of abundance stoked a desire to reclaim control over a salmon population. Greenberg’s logic: “Farmed salmon reclaimed that lost memory.”

The sea bass is less adaptive to captivity than salmon. Still, there are ten times more sea bass grown than caught every year. In captivity, their spawning patterns are hard to induce, their juvenile bodies are fragile, and their nutrient requirements are demanding. But in 1982, after the US issued a three year moratorium on the sporting and commercial fishing of the American striped bass—a fish that had reached its lowest population level by the 1970’s—the bass maintained its reputation as a rare “holiday fish.” Israelis had conducted years of scientific study in 1960’s, experimenting with manufacturing a hormone to control spawning patterns in captivity. But it was the Greeks who seized on an occasion to domesticate the finicky fish in the midst of 1980’s moratoriums. Their investigation into the nutritional needs of juvenile bass grown in captivity built upon the Israeli hormone trials and French/Dutch juvenile feed studies. “The stage was set for the sea bass to go global,” says Greenberg. Go global it did: Greece sends about 100 million sea bass to Europe and the US every year.

Not surprisingly, the 1982 sea bass ban was a precursor to stricter prohibition. In 1994, the United States banned commercial cod fishing in George’s Bank. This move was the result of heavy over-fishing encouraged by government subsidies just two decades earlier, to help build the water’s fishing fleet. Present and former generations of cod eaters have come to know different waters—with severe fishing limits on a species once considered the “everyday” fish.

As Greenberg moves his investigation through rivers, to coastal waters and then to continental shelves, his exploration ends in deep, unregulated waters with the plight of the bluefin tuna. Never has bluefin tuna been as plentiful as salmon, sea bass or cod. Its value as seafood is a recent advancement—a 20th century emergence in Japan that then caught on in the States only a few decades later. But when we compare a fish of such massive size with another giant of the sea, the whale. Whales are valued as wild animals, protected against human exploitation. Bluefins are valued as a delicacy, not yet considered untamable by fisherman and regulators. Greenberg views our behavior toward bluefin as arbitrary: “It is the battle with ourselves. A battle between the altruism toward other species that we know we can muster and the primitive greed that lies beneath our relationship with creatures of the sea.”

So what are our options? Greenberg envisions an ocean with small-scale, expert fleets, fish reserves that foster natural spawning and protect habitats, bans on fishing animals that are unmanageable and regulation of waters where forage fish need protection in order to flourish. To compensate for consumer demand, fish farms would still continue to be in existence but operate in keeping with “sustainable” measures: fish would be selected for their naturally low feed conversion rates and positive response to captivity, environments would be harmless to the natural ones that share the waters, feed would be sustainable and vegetarian, and most importantly, a polyculture technique would ensure that all organisms in the system contribute to and benefit from a self-sufficient life cycle.

To allow salmon, sea bass, cod, and tuna the lives they were intended—those in the wilderness—other fish of similar genetic make-up that respond well to captivity can offer possibilities for sustainable fish farming. It isn’t the inevitability of fish farming that Greenberg denies nor does he see the system coming to an end. “Contemporary demand is so large that any natural system is going to be taxed when subject to humanity’s global appetite.” His Bittman-like rationale: Just eat less fish in general.

By asking ourselves which fish are still “good” to eat (read: fish low in mercury and PCB levels, and still acceptable to eat by public standards), we may rethink our relationship with the sea. Greenberg’s Four Fish will only bring “bad human behavior of former times” to an end, if man recognizes the limits to his supremacy and relearns what early man knew better. That “he had no idea of his destructive potential or of his abilities to remake the world.”