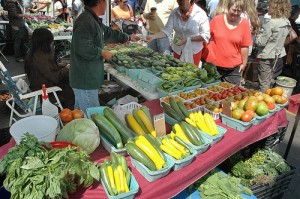 This week is National Farmers Market Week. Time for fresh corn, tomatoes and berries at your local farmers market, which now are as American as baseball and apple pie. In the past fifteen years, the number of markets has almost quadrupled to nearly 6,000. Americans annually spend $1.3 billion at farmers markets, according to Farmers Market Coalition estimates.

Business associations adore farmers markets because they revitalize depressed downtowns, bringing shoppers into otherwise ignored areas. Communities love them because they turn a parking lot or empty city street into a colorful and festive weekly commons where friends and neighbors can meet and linger. Farmers frequent them because they can capture 100 percent of the retail value of their products, helping revive a flagging small farm economy.

Yet, there is one group that has been excluded from the benefits of farmers markets: food stamp recipients. In the 1996 Farm Bill, Congress mandated that food stamp benefits (now known as SNAP, or Supplemental Nutrition Assistance Program) go from paper coupons to debit cards. The rationale behind this was to reduce fraud as well as the stigma associated with using food stamps. Food stamp recipients would have a plastic debit card to swipe at the checkout counter, just like an increasing number of middle class shoppers were using. This policy change proved to be successful in both of its goals. However, it left farmers markets unable to continue accepting food stamps because most of them had neither electricity nor a phone line to operate the necessary terminals. As a result, the value of SNAP benefits redeemed at farmers markets plunged by 71% in real dollars from 1994 to 2008. This decline was a loss felt by low-income shoppers and limited-resource farmers alike.

Now, in 2010, with new handheld credit/debit card terminals and inexpensive cell phone services, about one of every six farmers markets accepts SNAP cards. Many farmers market managers are finding creative ways of attracting SNAP customers and processing their cards. In some markets, SNAP, debit card and credit card customers go to a central table, hand over their cards and receive wooden tokens redeemable at any market stall. As New Orleans market wizard Richard McCarthy says, “We turn plastic into wood.” And this wood is quickly converted into delicious food as the shoppers make their way through the market.

As simple as this alchemy sounds, not all farmers markets have the capacity to take plastic cash. Despite their recent surge in number and popularity, many markets are volunteer-operated with shoestring budgets. Terminals remain expensive, about $1,000 each. Many of the nation’s 40 million SNAP recipients are not aware of farmers markets in their communities or perceive them to be too expensive or inconvenient. As a result, SNAP benefits comprise only thirty cents of every $100 spent at farmers markets.

There is an inherent unfairness to this situation. Public health research has shown us that low-income persons suffer from higher than average rates of diseases, such as diabetes and certain cancers, which could be prevented by a better diet. These “health disparities” are aggravated by the fact that many of these communities are “food deserts,” neighborhoods where access to fresh, healthy food is limited. With nutritionists recommending five servings of fruits and veggies a day, the lack of access to fresh food renders these messages futile.

For the sake of reducing health care costs, shouldn’t the government be doing everything in its power to ensure that SNAP recipients can spend their benefits at farmers markets?

Yet, this solution is more than just a matter of government action. Communities need to pitch in, too. Public health agencies should fund farmers markets to purchase and operate terminals to accept SNAP benefits. Community foundations, civic organizations and churches should support efforts to educate SNAP recipients on farmers markets and encourage them to shop there through special promotions. Finally, many farmers markets may need to experiment with new strategies to attract SNAP shoppers.

Americans tout fairness and choice as two of our core values. Is it fair that some Americans don’t have the choice to access farm-fresh food because their money comes on a plastic government-issued card rather than greenbacks? We all deserve the same opportunities regardless of the color of our money.