Wave of Change at Farmers' Markets: An Interview with Michel Nischan | Civil Eats

Wave of Change at Farmers’ Markets: An Interview with Michel Nischan 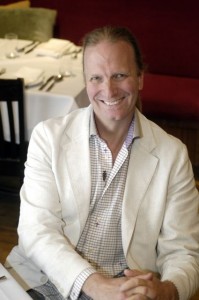 A recent report by the Community Food Security Coalition (CFSC) and Farmers Market Coalition (FMC) called “Real Food, Real Choice: Connecting SNAP Recipients with Farmers Markets,” gives detail to the economic, social and technological roadblocks that often prevent many Supplemental Nutrition Assistance Program (SNAP) participants from buying fresh and healthy food at their  local, or not so local, farmers markets. Is the real issue access or affordability? Michel Nischan, CEO and President of Wholesome Wave, talks about how their innovative programs are helping to avert a national health care crisis.

Q: If you had to use only one word to describe what Wholesome Wave does, what would you say?

A: That we catalyze. We basically fund markets that are accepting federal food assistance benefits, food stamps now called SNAP or WIC, but we need to have a funder that’s willing to support that particular market because we are not an endowed foundation.

For instance, look at our Double Value Incentive Program [DVCP]. We increase fruit and vegetable consumption for families that are on Federal Food Assistance who really don’t have the luxury of choice to buy fresh fruits and vegetables.  We could have been a local grass roots non-profit that only focuses on farmers markets in Connecticut and have DVCP as a marquee program, we could have found funders who would have been happy to fund us as an organization that does nothing but double the values of food assistance at farmers markets. But our end game really is finding market-based innovative approaches nationwide where there are feasible sources of ongoing funding that can be deployed that would have tremendous benefit to all tax payers. We seed the idea and then find the right non-profit that believes in these communities.

Often the non-profit comes to us and asks to get on board. And if there is a matching funder, we will provide them the training, the technical assistance, and then provide them the funding to kick it off. And in return, they have to provide the data that shows what happens with redemption rates, consumption, impact on the farmers, impact on the under-served community, etc. We’re now in 18 states and counting, and we watch how the program works everywhere because we are collecting information to build a case and say hey, no matter where we go, people in under-served communities want fruits and vegetables, they know what to do with them, and they just can’t afford them. So by being a catalyst for change, we see these ideas and so that we can show there is a broad indicator that can lead to a positive change.

Q: When it comes to increasing participation of federal nutrition program participants at farmers markets, is the issue about access or affordability?

A: It’s not as much of an access issue frankly as it is affordability. We’ve seen numerous farmers’ markets open near under-served communities. Many say that there’s a lack of demand. And it’s not a lack of demand, it’s a lack of affordability. A SNAP recipient receives an average of three dollars a day for food. So they made it through breakfast and lunch only because their kids are on the free breakfast and lunch programs at school—maybe they’d have two dollars for dinner. If you can get them to a grocery store—which is usually three bus transfers away–if you can get them there at all, if they can even afford the bus transfer which is actually more expensive than the SNAP dollars that they have, then you’re already putting them in a deficit just getting them to the store. But say they get there, and they have the two bucks, they look at a head of broccoli that’s $1.89 and a four pack of instant noodles that’s $1.69 – what are you going to put in front of your family? A quarter head of broccoli or four bowls of something hot? So it’s not Twinkies. It’s not Happy Meals. It’s a terrible, terrible misconception about what’s going on in these neighborhoods. It’s not like a lot of people make it out to be.

So when we double the coupons, yeah, ten to twenty dollars a week makes a huge difference for these families that have their backs against the wall. When you can provide them that affordability, because they have become so frugal and so expert at, at rubbing the pennies together, they will actually now put a cup of noodles in front of their family with a quarter head of broccoli and some fresh potatoes or some radishes or some roasted peppers, depending on what they buy at the Farmer’s Market. And now they’re getting a balanced meal instead of eating nothing but processed carbohydrates.

Q: Do you work out of Washington DC?

A: This is where Gus Schumacher [Wholesome Wave’s Executive Vice President] comes in. He is so brilliant and such a policy wonk—he created the Farmers Market Nutrition Program, which led to the cash vegetable vouchers, and the Senior Farmers Market Nutrition program. He’s amazing. We have a grant writing team and they help our partners leverage Specialty Crop block grant funding, farmers market promotion funding. Gus has worked in Washington DC at the administrative level of FNS, Food Nutrition Services [division of the USDA] AMS, [Agricultural Marketing Service] etc sharing the successes of these incentive programs, and he has succeeded in getting the demonstration pilot waivers eliminated, the alternative currency waivers and all of the data collection, just to accept SNAP, and now if you are a farmers market you can get approved and get an FNS number and get approved within 10 days when it used to take 45-90 days. All of these grant level and policy level changes have occurred as a result of this work.

We are not lobbyists, we don’t spend a dime, we don’t get paid to go to Washington DC. We figure out ways to rub nickels together. Gus goes in and gets people excited. And we see movement. Take Roots of Change, Michael Dimock’s program. He took over our program in San Diego and now we are serving 45 farmers market and 6 food sheds across California because he turned it into a state wide program with Gus’s assistance. Because of Gus there is soon to be a state wide program in Massachusetts and in Illinois.

Q: What’s the next big thing for Wholesome Wave?

A: The Fruit and Veggie Prescription Program is the next big one, and we believe it is a source of sustainable commercial funding eventually. Our lead partner in this is a Massachusetts-based organization called Ceiling and Visibility Unlimited (CAVU) along with Dr. Shikha Anand, in cooperation with Mass Farmers Market, and what we do is administer fruit and vegetable prescriptions to at-risk families so that they can increase their consumption significantly—a full serving of fruits and vegetables per day per person. And then as a result, because people get this free benefit as a prescription just like they would get their diabetes medicine, they have to come back every month to have their height, weight, blood pressure and BMI measured.

Our hope is to draw a direct correlation between increased access to the most vulnerable populations and increased consumption of these fruits and vegetables. There’s health reform now, it’s happening and it’s going to shift the system dramatically, from instead of rewarding health care providers and health care insurance companies to treat, it’s going to reward them to prevent. So when you can provide measurable prevention there’s an opportunity. So instead of getting $200 worth of Lipitor or Avandia or some other drug that week, you get $100 worth of fruits and vegetables for your family. The doctor will write you a prescription! And you’re getting a better health result.

In Native American reservations and in severely under-served rural and urban communities where people don’t have the access to healthy food, they are eating all these highly processed carbohydrates and they are becoming diabetic at an early age. And the peril of this, when you look at type 2 diabetes in children, those drugs that treat type 2 diabetes, have long term negative implications for human health, liver problems, all kinds of terrible, terrible side effects that weren’t an issue before. If you are 11 years old and you get diagnosed with type 2 diabetes and you have to take something which will cause your liver to fail in 25 years, well that’s a pretty big problem. So this can be prevented. The only reasoning why it’s happening is because the only thing these families can afford to feed their children are these highly processed, highly complex carbohydrates.

Q: What does it mean to you now that Wholesome Wave’s Double Value Coupon Program has been mentioned in the White House Task Force on Childhood Obesity Report to the President as a program that increases SNAP and WIC use at farmers markets by 300%?

A: That we are on the right track, and that our partners are doing an excellent job. Washington DC understands what is going on, why we are so unhealthy, why health care is so screwed up and we are looking for innovative ways to move us in another direction. We’re identified within 75 potential recommendations that can help reduce childhood obesity by 2015.