Sanders Field Farm: The Cook, the Farmer and the Local Community | Civil Eats

Sanders Field Farm: The Cook, the Farmer and the Local Community 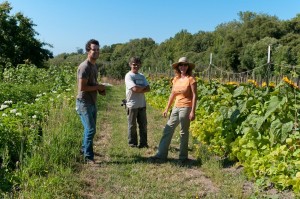 The drive down the gravel road to Sanders Field Farm in Sebastopol, CA leads me past an 80-year old apple orchard and into a sun-drenched clearing of strawberries, tomatoes, beans, eggplant, and sunflowers. Lowell Sheldon, the proprietor of Peter Lowell’s, meets me at the gate, hands covered in dirt after harvesting food from the farm for his Sonoma county restaurant.

Not far behind him are Daria Morrill and Tony Tugwell, whose 12-acre organic farm is off the grid, running only on solar power. With two acres under cultivation, the couple has designed a compact production scheme solely dedicated to the restaurant—kale, chard, baby lettuces, spring onions, snap peas, and broccoli glow in the afternoon light, set to become part of Peter Lowell’s menu of sustainably grown sustenance.

As we tour the tomatoes—heirlooms grown to spec—Morrill, new to farming, but not to plants, tells me, “This is my gift. I am lucky to get to plant and be outside, with my hands in the dirt…it is my form of freedom.” Morrill spent years nurturing Cottage Gardens nursery in nearby Petaluma, where she started a popular vegetable seedling program. Tugwell—a “tech guy” who spent two decades in “a cubicle banging out code for corporate America”—is the farm’s director of operations, running tractors and hooking up irrigation and alternative energy systems. The couple had their eye on the piece of property for over a year and though they declare themselves “too old to become new farmers” (let’s call them “middle aged”) they are now happily and successfully growing over 100 varieties of produce. 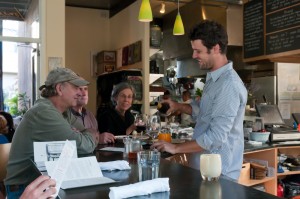 Sheldon now sources more than 50 percent of his produce from the farm, supplementing from other local farmers, and through Veritable Vegetable. He pays Morrill wholesale prices, but there is a lot more to their transaction. He’s at the farm at least three days a week, helping to harvest and plan the crops. “I honestly feel the cycle of life is at its core [and that is] what inspires me about farming,” Sheldon says. “[It is] the process of transformation from seed to plant and back to seed.” Creating a true farm to table to farm system, all of the kitchen waste is composted on the farm, though table scraps are not. But that’s not a problem, Sheldon winks, “everyone eats all their food.”

His staff of 17 also volunteers at the farm once a week, including his new chef, David Vargas. Often times chef and owner will meet at the farm to work together in the fields, one of the few places they can talk undisturbed. “Working with fresh organic product is one thing, but being able to go out to our own farm and harvest twice a week has a very different feeling,” Vargas says. “To know what is in our fridge and what is in the field and be working from both angles while I am cooking is very inspiring. The creative energy that is out there on the field is one that cannot be found in a book.”

Growing its own food was the obvious next step for Peter Lowell’s, where the signature statement is its commitment to fresh, seasonal, and locally produced food and wine. Nearly everything on the menu is local and/or organic. Sheldon notes that his “slightly off-kilter attitude towards business—one where people, animals, and the environment come before profit, where organic is a way of life, and where the highest quality cuisine is a top priority—is in keeping with our community’s standards.”

And he should know. Sheldon, 29, was raised on two acres in Sebastopol in a back-to-the land environment with animals and a large vegetable garden. Educated at a local Waldorf school, he studied in Washington State, where he worked in restaurants, and then lived overseas, where he worked with at risk youth. Wanting to create a dynamic community space, Sheldon came home and dove into the restaurant business, opening Peter Lowell’s three years ago.

The menu is Italian-inspired and features the bounty of Sonoma County: crisp thin-crust pizzas are expertly cooked, fresh, handmade pasta is finished with local Skipstone olive oil, and numerous salads showcase the stellar farm produce. Sheldon, who for many years was a vegetarian, originally did not serve meat on his menu because he feels that the level of consumption of ranch-raised meats by Americans is unsustainable. “It seems that essentially it is this level of consumption that has led to factory farms and the horrid state of farmed animals in this day and age,” he says. “Of course it is also the inverse, meaning that the economic drive for profit by the ranching industry has led to these farms, in turn putting more pressure on them to sell more meat at cheaper prices.”

He started serving meat not because of an overwhelming pressure from his clientele, but rather because the financial strain of opening the restaurant put him in a position where he needed different options. “Across the board meat should be drawn back on menus; it should make up about as large a part of menus as it should of our diet in general,” Sheldon says. “Restaurants have a responsibility to not only serve exciting and groundbreaking cuisine, but also to show people how they should and can eat more consciously.” 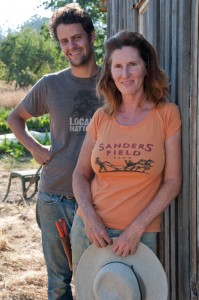 Sheldon’s commitment to sustainability does cost more, often nearly twice as much. “For me, being educated about all aspects of sustainability and what I can do to make my restaurant more sustainable, is very exciting and empowering,” he says. “Even though we are not yet recognized as a world-class restaurant, I know we are doing sustainability as good or better than any urban restaurant in the world. We obviously gain a lot by being true to our ideals. People get what we are doing and come regularly because of it.”

Sheldon’s the first to admit that his previous business partner and he were new to managing the restaurant, which led to a “financial catastrophe.” While he remains in debt, Sheldon now calls his business “stable” (it is nearly always full) and has big ideas for the future. He envisions having a stand at the Sebastopol farmers’ market, to sell the restaurant’s pasta, and a Community Supported Agriculture (CSA) program, to offer his customers a box of farm fresh food to cook up in their own kitchens.

Both through the connection to the restaurant and on its own volition, Sanders Field Farm has also become a destination for people who are drawn by its beauty and community feel: one woman is starting a flower growing program there, some volunteers who live just at the poverty line come to work for food, and many others come to pull weeds and escape their offices. “The farm has its own purpose and attracts people who all bring something of themselves with them and take something of the farm away with them,” Morrill says. “I thought my job was about growing veggies for Lowell but there is this whole other dynamic happening where I’m facilitating what is wanted when it shows up and rolling along with the surprises that arise that are quite different from my own agenda.”

That the farm has power in creating community is clear, and it starts from the relationship between the farmers and the restaurant owner. As I left the farm, the light glinting between the 300 knotty apple trees, the team was looking over perfectly serviceable collards, snap peas, broccoli shoots, beets, and potatoes. “Those are a gift to Lowell,” Morrill nods at the boxes brimming with food. “I can’t use them because they’re not perfect, so I’m throwing them in.” “It works out,” Tugwell says. “We’ll come in later for a beer in trade.”