Was Meatopia’s Vision Too Utopian? 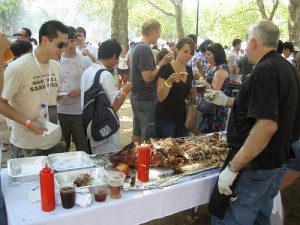 With the dust from Portland’s Cochon 555 pork-sourcing brawl just barely settling, another sustainable meat controversy is brewing here in New York City. According to the press release, July’s massive festival Meatopia was meant to be a sustainable meat showcase where participating chefs would “partner with a local farmer who will provide locally raised, sustainable meat for their featured recipes.” In a few cases this actually happened: La Esquina’s Akhtar Nawab made tacos with pork shoulders from Fudge Farms (Alabama) and Boqueria’s Seamus Mullen cooked lamb from his parents’ Vermont farm. But ultimately most of the meat served at Meatopia came from conventional sources. So what happened to the Utopian vision for Meatopia?

This year’s Meatopia, led by food journalist Josh Ozersky and Jimmy’s No. 43 owner Jimmy Carbone, was actually the 7th incarnation of the annual event. Meatopia began as an invitation-only, meat-centered celebration of Ozersky’s birthday. This is the first year the event was open to the public–resulting in a swarm of an estimated 5,000 attendees. This was also the first year Meatopia took on a green mission. Carbone came up with the idea of pairing chefs with local and sustainable farms and making the event a benefit for Slow Food NYC (of which he is an active supporter) and Just Food.

With just three months’ lead time, event producer Lisa Amadeo started contacting local farms to create a list of producers, like Flying Pigs Farm, willing and able to supply participating chefs with large quantities of meat at a discount (it was hoped that the discount would provide some incentive for chefs). Chefs were given this list, told that the branding for the event centered around local and sustainable meat, and encouraged to contact the farms on the list when ordering their meat.

A sustainable meat advocate herself, Amadeo felt personally invested in making the event work. Yet the organizers also felt they couldn’t make sourcing from the list of local farms a requirement for participating, especially since the chefs were donating their time and fronting the cost of the meat themselves. Overwhelmed by the logistics of putting on a large-scale food fair on an island with no potable water, due diligence on the question of sourcing fell by the wayside. Even now no one could tell me exactly how many chefs had found local sources for their meat.

This left Slope Farms beef farmer and Meatopia panel participant Ken Jaffe feeling steamed. He was tapped to speak about sustainable meat and to make his meat available for the chefs. No one called him for his meat. Meanwhile, at the event, he conducted an informal poll of the participating chefs to find out how many had actually partnered with local farms; he couldn’t find any. Jaffe felt the event had been too large and well-publicized for the oversight to go unnoticed, so he contacted the organizers to express his alarm. “My concern is that it’ll make the whole local-sustainable thing look like a fraud,” he told me.

Ulla Kjarval, a partner of a farm located near Slope Farms and a food writer and photographer, was also disappointed with the event. “I recommended Ken Jaffe knowing he could help source the event and was disappointed to learn that they did not use his meat but still used his farm name on promotional materials.” She wishes the organizers had made a greater effort to facilitate relationships between chefs and farmers because in doing so “a ripple effect would have been made and local sourcing would have been given a boost. As it stands now we have a lot of work to do when it comes to distributing meat from upstate to downstate. We have multiple new processing plants opening, and it is imperative that chefs and institutions make a real commitment to creating meaningful relationships with local farmers.”

Carbone has taken responsibility for the miscommunication. “I’m sorry if [attendees] were misled about the event,” he says. “I was overeager. I wanted to have that message [about local and sustainable meat] out there. I wanted chefs to do local sourcing. It’s my fault… All I can do is make it better next year.” Amadeo was also disappointed with how few local farms were ultimately involved. “I did everything I could to make it happen. Unfortunately my efforts fell short. I really thought providing a list and talking with them [the chefs] and encouraging them and offering discounts would work.” As for Ozersky, though he admits there were some problems he still deems the event a success. “I don’t feel we have anything to apologize for. We threw a wonderful event. We were able to benefit Just Food and Slow Food and were were able to pull it off without it turning into Altamont.”

All three organizers want to make next year’s Meatopia 100% local–and they want to avoid asking farmers for a discount. A follow-up survey was sent out to the participating chefs asking (among other things) what organizers could do next year to facilitate a truly locally-sourced event. But what else would have to happen in order for Meatopia to be 100% local? What are the barriers? Why wasn’t local and sustainable sourcing a slam-dunk?

To begin with, everyone seems to have a different idea about what local and sustainable meat means. In talking with chefs, Amadeo found that many considered animals raised without hormones or non-therapeutic antibiotics sustainable, even if they come from a large operation like Creekstone (as did much of the meat for Meatopia). “The definition of sustainability differs for everyone. We [the organizers] have to define what our notion of sustainable is. I think people can very easily overlook the word sustainable and think, okay, I know what that means.” The same goes for local. Does local mean from New York State? Is Virginia local? Compared with meat from Patagonia or New Zealand even beef from Wyoming is pretty darn local.

A significant barrier to local and small-farm sourcing for meat is the level of flexibility it requires for chefs. Fatty Cue’s Robbie Richter (who worked on equipment logistics at Meatopia but did not cook his own dish) does source from Heritage Meats and local producers. He says pulling off the local/sustainable meat act is a lot harder than it looks. “We’re all in favor of local/sustainable meats but unless you have an established relationship [with a source] it’s hard for a chef to make it happen for just a one-time deal.” While a chef can call up a large-scale distributor like Sysco and request specific cuts to be delivered the next day, small farms need at least 7-9 days’ notice for an order. “A restaurant has to be a fortune teller, guessing how much of an ingredient they’ll need for a given night over a week in advance. You also need to be flexible with the menu–even the restaurant design needs to be configured to support this different model for sourcing.”

Amadeo also points out that it’s hard for small farms to supply large quantities of meat all at once for a given event. Many of the farms she contacted were excited about the event but unable to produce sufficient quantities of meat for the chefs, and many were also unable to provide the kind of discount she thought chefs were looking for.

In fact, the very model of ordering large quantities of the same cut for a one-day event is, well, unsustainable if you’re trying to do local, small-farm sourcing. Jaffe gives the skirt steak–there are only two per animal–as an example. “You cannot serve 7000 people local, sustainable skirt steak. If you serve 3 ounces per person that’s about 1300 pounds, which is about 1000 steers’ worth of skirt steak with the other 99% of the animal left to sell. That’s not the planet we live on.” Meanwhile most small-scale farmers are set up to sell whole or half animals. Clever and resourceful chefs at restaurants like Diner and Bubby’s (who both buy Slope Farm beef) do know how to make use of large pieces–and that’s how they make local sourcing work. In recognition of this, Ozersky and Carbone are now considering a whole-animal approach to the next Meatopia in which they would do the sourcing themselves and then challenge participating chefs to make use of as much of the animals as possible.

Jen Griffith, Farm Network Coordinator for Just Food, agrees that moving to more sustainable meats will require a shift in how people use resources. “Over time we’ve created this system where we want uniformity, especially in the restaurant world.” She also points to the need for better infrastructure supporting local and sustainable meat sourcing. “I think [Meatopia] points to an issue that we’re facing as a city where we’ve put a lot of mechanisms in place through our markets and CSAs, and we have some really strong relationships with local vegetable farmers. But I think we need to do a lot more work especially with meat and dairy. We need more infrastructure. We see meat as the next frontier for the city, and we’re looking for the resources to help us move forward on that.”

Jake Dickson of Dickson’s Farmstand says his “whole business is designed to surmount the challenges of local sourcing. I buy everything direct–no middle man.” Dickson ran an educational booth for Meatopia at which he marinated and roasted half a Berkshire pig from Sir William Angus Farm (Hudson Valley). For his butcher shop he spent 2 1/2 years building his supply chain of farms. All of Dickson’s meat is processed at a slaughterhouse where he used to work and is then aged in a custom-built refrigeration system.

Still, Jaffe hopes that nonprofits like Slow Food and Just Food will at least unlock some of the distribution challenges chefs and consumers both face. “I think [Meatopia] is a clarion call to them to make distribution work… If you’ve got all these people showing up to eat local/sustainable meat and traveling to an island, the demand is there.” He envisions restaurants joining together to share purchasing, dividing whole animals between chefs. He adds that farms could work together more to share shipping costs to New York City.

Finally, we consumers have to look our role in the local/sustainable meat movement. While the issue staying true to local/sustainable ethics in Oregon was explosive enough to drive a chef to break an event organizer’s tibia, here in New York the talk was all about how quickly Meatopia ran out of food and how long the lines were. People have told me they attended Meatopia specifically for “meat they could believe in.” But after pouring over Facebook discussions and food blogs I couldn’t find a single comment from anyone asking where the farms were. If nothing else, Meatopia teaches us that we are at the point in the sustainable food movement where we cannot take general claims made with buzzwords for granted. And we can’t get by on good intentions. We need to better inform ourselves and show up ready to ask questions.

On September 19, Jimmy Carbone will be producing another big meat event on Governor’s Island. This time he is focusing just on pigs–and he’s buying the meat himself from Violet Hill Farm and The Piggery. I don’t know about you, but I plan on showing up for this event to see how Jimmy makes it work. It’s his big chance to redeem himself, and for his sake and the food movement’s sake I hope it’s an authentic, rousing success.