The Farmer And The Fisherman | Civil Eats

The Farmer And The Fisherman 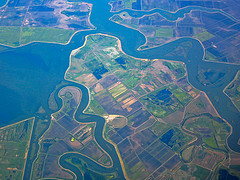 On a recent Tuesday evening, a group of thinkers and food lovers gathered to hear a farmer and a fisherman talk about water. The occasion was the latest in the Kitchen Table Talks series, and it took place in the basement of Viracocha in the Mission district. Contrary to the how the media often portrays such things, the farmer and the fisherman were in agreement.

Like most conversations about water in California, the evening focused around the Sacramento-San Joaquin River Delta, the West Coast’s largest ― and some say most important ―inland river delta and estuary.

The farmer in attendance was Brett Baker who, along with his father Chuck Baker, farms pears on a small island in the Delta called Sutter Island. He’s also a biologist and has worked as a water and agricultural policy analyst. Brett readily admits that farming on the Delta, at the scale his family does, sets him apart from many in the agriculture industry.

“It’s convenient to draw that line between farmers and fishermen,” he told the audience. “But there are several classes of agriculture in the state; there are small family farmers—my family lives on and farms around 30 acres—and on the opposite end of the spectrum you have farms, like the kind you see on I-5, that stretch for miles.” Many of these large corporate farms, he pointed out, “are set up as tax shelters for larger companies” and often see water as just another line item in the larger drive to make a profit ― rather than a precious life-giving resource.

Like many area fishermen, Hudson believes that without leaving more water in the Delta, we’re unlikely to see a healthy population of salmon return. “Just a few years ago, our fleet of fishermen went out and caught close to two million salmon, and close to a million fish went back up the river,” Mike recalled. But, as the amount of water exported from the Delta went up, the number of fish went down – dramatically. Now, he says, the number of salmon returning to the Sacramento River tributaries is down to only 50,000 fish.

“Through the 90s,” Mike said, “around 4.5 million acre-feet of water were exported every year.” [An acre-foot is acre of land covered by a foot of water.] In the early 2000s, that was ramped up to 6 million acre-feet a year.” That change, he says, is a direct cause of the lack of salmon and has put an ecosystem in danger.

Both speakers agree: it’s important to keep a healthy amount of water flowing through the Delta. A recent study by the California State Water Resources Control Board echoes this sentiment. Currently around half of the snowmelt and rain that flows into the Delta watershed every year moves out into the Bay. In order for a healthy ecosystem to exist, 75% of the water should be making it out to the bay.

The two men are concerned about an 11 billion dollar water bond proposed in Proposition 18 that will be likely be voted on* this November. While the bond reads like a promising move forward in the efforts to manage water in the state, both men feel that what little conservation efforts it includes are largely outweighed by the advantages it offers to a few very large agriculture businesses.

At the center of the projects the bond would fund is a peripheral canal, or a man-made pipeline that would route water around the Delta from a more northerly section of the Sacramento River. Not only would such a canal be costly to the state, but it would allow more salt water from San Francisco Bay into the Delta. “It could have a devastating effect on all of the small farms that have existed in the Delta for generations,” said Baker.

Another big concern both men shared was the fact that the water bond (which would cost Californians $800 million in annual debt payments for the next 30 years) sets aside $3 billion towards water storage projects – with a preference to dams. The bond would allow private corporations to be part owners of these dams and to re-sell the captured water to developers for a profit. An example the advocates point to [PDF] is something called the Kern Water Bank. The water bank was initially funded publicly, and was built using public funds, but is now owned by Paramount Farms, a project of the billionaire business man Stewart Resnick and his wife Lynda (owners of POM, Fiji Water, Teleflora and millions of acres of almond and pistachio orchards).

In the end, both farmer and fisherman agreed that the issue of water in California is less about agriculture versus fishing than it is about big business versus public interest.

To learn more about water bond, read Governor Schwarzenegger’s break down here or visit Food and Water Watch’s No On The Water Bond for the opposing view. Or read an op-ed from the United Farm Workers here.

*There is a chance that a vote on the bill may be delayed until 2012.