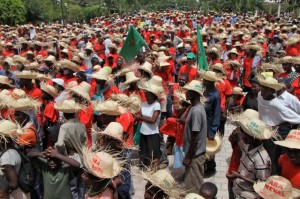 When I volunteered in Haiti after the earthquake, it was glaringly obvious that we were standing in the midst of a failed food system that had been collapsing for decades.  Natural disasters strike annually all over the world.  Yet Haiti’s post-quake humanitarian crisis is the ultimate test case of the dangers of food dependence and an urban-factory based development model.  To truly get at the heart of how food affects the most vulnerable people and environments around the world, you must understand the Haitian story.

It’s a story still in the making.  Haiti is unfortunately scoped to be rebuilt upon the same models that failed in the past.  Yet there is a counter-current as well, and the more I spoke with these dynamic groups, the more I realized that the best way I could awaken people to the impending crisis of the 21st century – sustainable food security – was to document the truth behind Haiti’s crisis and highlight a new model being clearly demonstrated in the countryside.

Thus, Hands That Feed was born – a non-profit documentary film exploring the agricultural collapse in Haiti, its role in the post-earthquake food crisis, and the emerging grassroots sustainable agriculture models that seek to restore Haiti’s rural economy and environment.  We are currently fundraising on Kickstarter for our first major filming shoot and are urgently seeking to pull-in grassroots donations to reach our $15,000 goal by August 2nd (or else all funds will be returned to donors).

In the aftermath of the earthquake, the world watched news footage that conveyed looting and wrestling for morsels of food in Haiti.  The result was an unprecedented upwelling of international compassion and support.  Yet the underlying social and political causes of the crisis are not widely covered or known, and it is easy at first glance to simply blame natural events.  But there’s of course a larger story.  The development paradigm encouraged and enacted for Haiti over the last 30 years – while converting the small country into America’s 4th largest rice export market – flooded Haiti with cheap, subsidized food imports that rapidly changed the face of the largely rural, agriculture-based country.

Haiti’s rich agriculture generated one-quarter of France’s GNP through the 18th century, literally financing the bourgeoisie’s revolution in France against the aristocracy.  Following the world’s only successful slave revolt (which was ironically inspired, in turn, by the ideas of the French Revolution), Haiti then redistributed the French estates and established a tradition of small-scale subsistence farming.  The country remained largely food self-sufficient until the early 1980’s. Yet following trade liberalization with America’s heavily subsidized agriculture sector, Haiti’s farming incomes collapsed.  As a result, the population of Port-au-Prince has more than doubled since 1989.   These migrants came to live by the hundreds-of-thousands in flimsy slums built upon the hills surrounding the capital, seeking illusory factory or construction work, just as they have all over the world.  Living off-the-grid, their primary fuel is charcoal, which created a growing industry for the depressed countryside, leading to rapid erosion, severe flooding, and a loss of Haiti’s topsoil and aquifers.

When the earthquake struck, these shanty towns collapsed like pancakes.  The situation quickly degenerated as there were no local food supply chains to feed the survivors, and the sole port through which Haiti imports 80% of its staple food from America was severely damaged.  The perfect storm was realized – because of bad food policy.  I wrote in detail on this process, based on my work in Haiti after the earthquake, in Why Did the Haitian Earthquake Become a Food Crisis? on GoodEater.org.  Some of these issues were also touched upon in this fantastic NPR “Planet Money” video segment from two weeks ago: The Problem with Giving Free Food to Hungry People.

Bill Clinton, one of the administrators of this policy mix in Haiti and elsewhere, and now the UN Special Envoy to Haiti, recently made a major admission of error:

“Since 1981 the United States has followed a policy until the last year or so … that we rich countries that produce a lot of food should sell it to poor countries and relieve them of the burden of producing their own food, so thank goodness they can leap directly into the industrial era. It has not worked … it was a mistake… I have to live everyday with the consequences of the loss of capacity to produce a rice crop in Haiti,” Clinton told the Senate Foreign Relations Committee on March 10, 2010. “The country has the best chance in my lifetime to achieve this objective: to build a modern self-sustaining state. But what it means is that we have to think about our roles in a different way, and how we will play them in this reconstruction process.”

Haiti’s population is still 75% farmers, they have amazing year-round growing conditions, and the urban population desperately needs food.  Going forward, shouldn’t investing in agriculture be a slam dunk?  It would seem obvious.  Yet the development plans generated by the power brokers behind Haiti’s reconstruction plans dogmatically stick to the same failed script.  The primary innovation is to invest in four other major cities in Haiti in addition to Port-au-Prince.  Yet what about the rural areas where ¾ of the population lives – the stewards of Haiti’s food supply and ecosystem?

This time, however, there is a counter-movement, and that’s exactly what we seek to capture. Nouvelle Vie Youth Corps, for example, is training, and paying, 30 vibrant young Haitian leaders to go out and teach a thousand Haitians sustainable agriculture skills, build intensive agriculture plots in schoolyards and refugee camps, and teach post-trauma breathing techniques.  From this thousand, Nouvelle Vie will recruit a new batch of 100 Youth Corps members, who will then teach 10,000. All the while developing Haitian self-reliance both in food supply and leadership.

The MPP Peasant Movement, with membership of 50,000, and a rising star named Chavannes Jean-Baptiste, recently led a demonstration of 10,000 peasants who burned early shipments of Monsanto’s “gift” of 475 tons of seeds. Givelove.org is constructing ecological structures for the displaced. Noramise is building sustainable farming communities in the Limbe region. Partners in Health has launched sustainable agriculture projects in Corporant and Boucan Carre producing over a hundred thousand pounds of natural nutrient mixes for survivors and training technicians to spread ecoagriculture practices. The list goes on.

Sustainable food security is Haiti’s current dilemma, and it is the world’s fomenting crisis.  If we do not holistically address this fundamental problem through a new approach to agriculture and development, we will be watching the same horrific scenes over and over again, both in Haiti and around the world. To help us capture the grassroots agricultural work unfolding as we speak that seeks to simultaneously alleviate rural poverty, restore the environment, and create genuine food security, we really need support. Please check out Hands That Feed, make even a small donation, and forward the link to anyone interested in Haiti, international development, and/or sustainable agriculture.  We are rapidly approaching our August 2nd deadline on Kickstarter and need your help so we can get this story out to the world.

Joshua Levin is a consultant to non-profits and their corporate partners in sustainable agriculture business development and sustainable food markets. He has worked with WWF, Conservation International, the Rainforest Alliance, EcoAgriculture Partners, and Root Capital. Joshua is also co-founder and co-editor of the multi-author sustainable food blog www.GoodEater.org. Read more >