11-Year-Old Grows Veggies for the Homeless 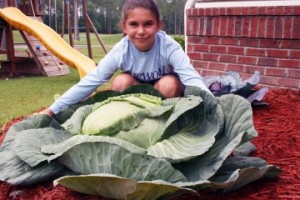 When Katie Stagliano was in third grade, she planted a cabbage in her family’s small garden. When it grew to an astounding 40 pounds, she donated it to a soup kitchen, where it was made into meals for 275 people (with the help of ham and rice). “I thought, ‘Wow, with that one cabbage I helped feed that many people?'” says Katie, now entering sixth grade. “I could do much more than that.”

So Katie started planting vegetable gardens as part of her nonprofit Katie’s Krops — she has six right now — including one the length of a football field at her school in her hometown of Summerville, S.C. Classmates, her family and other people in the community help plant and water, and Bonnie Plants donates seedlings. This past year, Katie took her commitment to a new level: she has given soup kitchens over 2,000 pounds of lettuce, tomatoes and other vegetables. Katie and her helpers are now harvesting the spring planting, and another 1,200 pounds will be donated by October.

“She just walks in like a proud little girl with her treasures in her arm,” says Sue Hanshaw, CEO of Tricounty Family Ministries, the soup kitchen in Charleston, S.C. where Katie first brought her 40-pound crucifer. “I love what she exudes, caring for others. It’s made a big impact on a lot of people.”

Says Elois Mackey, 49, a formerly homeless mother of two who has received a weekly vegetable delivery from Katie since September: “She is showing that you can help other people no matter how young you are. I love the vegetables she brings.”

Katie is a well-spoken 11-year-old who juggles the life of a school child with that of a world-changer. Swim practice, tennis matches, and studying (she has had the highest GPA of her class for the last four years) are sandwiched between daily waterings and tending.  “It makes me feel good,” says Katie. “I feel bad for those people who have to go to Palmetto house [a homeless shelter where she and residents recently planted a garden], but I feel good that I’m helping people.” 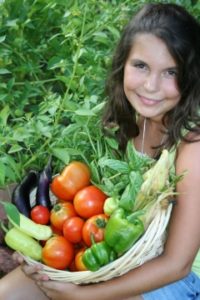 Katie’s desire to help as well as create sprouted early. “She’s always been very inquisitive and wants to go above and beyond,” says her mom, Stacy, 41. “It’s like, ‘What about this and why aren’t we doing this?”

Since the age of four, Katie has placed first in competitions that include inventing a toothbrush now on sale that teaches water conservation, for the Dr. Fresh company. “When you put the toothbrush in your mouth to brush,” says Katie, “it plays a rap song that says, ‘Turn off the water when you brush your teeth, and you can save eight gallons of water.'”

As a third grader, upset about a local drought, Katie decided her school, Pinewood Prep, needed to conserve water. Katie wrote the headmaster over Christmas break, suggesting how the school could better conserve. Soon after, the high school’s advanced placement environmental studies teacher called to meet with her and work on a water conservation project. Katie’s suggestions for rain barrels to catch water and other ideas were soon implemented throughout the school. “As a parent, I am so moved,” says Stacy. “I say to her, ‘I hope some day when you are a parent, you have a kid who is as amazing as you so you can see it from a mom’s perspective.'”

Much of the thanks goes to Stacy and Katie’s devoted group of helpers, including her 7-year-old brother, John Michael, who has toiled in two of the gardens to plan pumpkin patches.

Since February of last year, master gardener Lisa Turocy has not only sat shoulder to shoulder with Katie planting and giving advice, she’s transformed her entire front yard into a garden with 600 seedlings. “If I can help her change the world,” says Turocy, “that’s awesome.”

Locals Linda and Bob Baker, golf professionals with 41 acres of farmland set along a rutted dirt road on the outskirts of Summerville, gave Katie some acreage for a garden. Bob lugged his John Deer tractor to Katie’s school to till the soil, and taught Katie how to drive the machine. Says Bob: “It makes you feel so good to see someone that young with that amount of compassion, step in there and really make a difference.”

As one of Katie’s best friends said, most kids their age mainly like to watch TV and play on computers; they don’t like to do what Katie does. Another friend, Anna Semar, 11, inspired by Katie to grow her own vegetable garden, says: “If there were more people like Katie the world would be a better place.”

Katie wants to get more kids across the country growing gardens to help others, so she’s holding a contest and offering the winners a grant. And, Katie will come and help start each garden. Click here to apply.


If you want to donate to Katie’s nonprofit, Katie’s Krops, she needs money for irrigation equipment, fertilizer and other supplies for her six gardens.

Diane Herbst is a freelance writer based in New Jersey, and a regular contributor to People Magazine. Read more >