Getting to the Meat of the Matter: An Interview with Daniel Imhoff about CAFOs 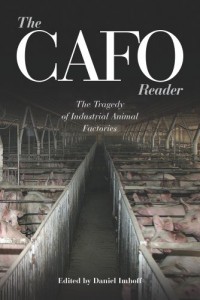 The CAFO Reader – a new book featuring essays by farmers Wendell Berry, Becky Weed, and Fred Kirschenmann, Republican speech writer Matthew Scully, journalist Michael Pollan and Robert F. Kennedy, Jr., among many others – gives a full picture of the environmental, social, and ethical implications of Concentrated Animal Feeding Operations, and includes a section of essays on “Putting the CAFO Out to Pasture.” A CAFO is an Environmental Protection Agency designation for a farming facility that keeps numerous animals raised for food in close confinement, with the potential to pollute. These facilities often produce extreme amounts of waste, which ends up in toxic lagoons, sprayed on the land, and eventually in the watershed; require the use of high doses of antibiotics, thereby adding to the growth of drug-resistant bacteria; and are exempt from most animal cruelty laws. I spoke with the editor of The CAFO Reader, Daniel Imhoff, who is also the cofounder, director, and publisher of Watershed Media, about recent legislation and the future of the CAFO.

Our last interview was before Obama was elected. How do you feel now that there is Know Your Farmer, Know Your Food, and a Secretary of Agriculture that is actually discussing making changes in agriculture?

You can’t help but be thrilled about the discourse that is going on right now. You have the FDA coming out with guidelines saying is that we need to limit the use of antibiotics in animal food production only to medical need. Then you have the USDA issuing new nutritional guidelines that basically say we need to eat a lot less saturated fat, AKA animal products, and a lot more vegetables, nuts, and whole grains. Then you have the Department of Justice, the Attorney General and the USDA jointly looking into concentration within the agricultural industry. I think what it really shows is that these people understand their jobs and are not afraid to do them. We might be getting towards an age of clarity and urgency. You can’t help but look at the oil spill, and say there is an exact metaphor with the industrial food system—it’s uncontainable, and it’s unsustainable, and it’s inevitable that we have to get somewhere else. And that something else is pretty much the exact opposite of what we have right now.

If CAFOs were called “factories” instead of being called farms, would they be regulated differently?

If the CAFO is legally considered a farm, or an agricultural enterprise, rather than an industry, then it is exempt from regulation of its airborne and land-borne waste. The industry has been fighting for many years to retain this agricultural status. Agriculture developed as this interaction between the appropriate number of animals creating fertility for a diverse number of crops. It was a whole closed production system. With this intensive concentration of animals it’s rare when the surrounding land can absorb the waste.

What effect do you think a change in our policies around antibiotic use in livestock would have on the way the industry operates?

It cuts right to the issue of scale. If you take away the antibiotics, then you can’t cram so many animals in such unhealthy conditions with an unnatural diet. And so you suddenly have to reduce the concentration and intensification of agriculture.

How does agricultural concentration affect farmers and consumers?

These companies want us to think that they are Smithfield Farm, and that they are taking care of their pigs. But they control the breeding facilities and production, they own feed mills and slaughterhouses. They are producing huge amounts of meat, and so the price stays low, but you either play their game or you have to make your own alternative industry from start to finish. At one of the Department of Justice workshops, a chicken farmer was saying that a bucket of fried chicken in his area costs $26.95, and he gets $0.30 for growing the chickens that went into the bucket. And in the meantime the CEOs of Purdue, Tyson, and KFC are making millions.

Farmers often feel attacked when criticism is laid on the industry. Do you have any ideas for how to remedy this disconnection?

The only way that we can help that disconnection is to bring more farmers into the discussion. For many years, what we’ve seen is corporations hiding behind this facade of the rancher or the farmer with his cows ambling around the pasture, a few hogs and a couple chickens. [In fact,] the corporations that are dominating food production right now are extremely anti-farmer. They’ve basically wiped out the small livestock producer in the United States. And anyone who remains, who can sell to these huge corporate interests is either massive or they’re a corporate contractor and they are barely surviving. What is heartening to me is to hear the Secretary of Agriculture say that one of his goals during his tenure is to generate 100,000 new farmers.

Wendell Berry’s essay, Renewing Husbandry, talks about how modern agriculture has decreased the amount of landowners and self-employed in rural areas. What effect is this having?

Wendell [says that] when you lose your small farmers, you lose your community. When you loose your community, you loose your reverence for the land. When your reverence for the land is turned over to this higher corporate economic power, then everything becomes commodified. Then we loose the beauty and our control over a healthy life, the fabric of our country. And these are the issues that are at stake here.

What do you view as reasonable goals for the food movement, specifically around changing CAFO policy?

Ultimately, I think the long-term goal is probably the elimination of the CAFO. How practical is that? Well, I don’t know. Certainly you are working from all directions at the same time. Governor Schwarzenegger signed a very important piece of legislation [that] says that anyone who sells eggs in California has to abide by the regulations put forth in Proposition 2. That means if you are in Iowa, and you want to sell eggs in California, you can’t use battery cages after 2015. I think that [it] would be a reasonable goal to have [Doctor of Animal Science and professor] Temple Grandin helping to shape the ethics and the economics of animal food production. She has a mind for trying to make things work from an animal’s perspective, and she is not unrealistic. Somehow we have to get industry out of the driver’s seat.

What about some of the techno-fixes, like genetic modifications geared toward producing animals more suited to factory farm conditions. Do you think they miss the point?

[The industry] is just trying, at all costs, to keep a bad idea afloat. Trying to engineer a featherless chicken that doesn’t need to be plucked, the hen or the sow stripped of its mothering instincts so that its not traumatized when its babies are taken away, grasses that will decrease flatulence and therefore methane production in livestock. Ultimately where we’re going now is in-vitro meat, where we don’t need animals at all, we just clone tissue, and manufacture animal flesh.

Which has been praised by animal welfare activists because there wouldn’t be animal suffering involved. Do you see this as a way of decreasing the amount of factory farms?

I understand it in principle. I don’t understand how you factor the environmental footprint of that process, but its something much deeper. In this life that we’re living where we give over the power and the responsibility of growing food to somebody else, we’re separated from the very processes of life. And in that disconnection, it makes it harder and harder to understand how ultimately everything is extremely connected. What you hear from industry [is] how are we possibly going to satiate [the growing population] without intense concentration of production, and without the industrialization of agriculture? And in fact we haven’t really answered that question. And that is going to be the question for me for the next 50 years, is how are we going to create diets in each of our respective regions that become the engine for health, they power our bodies, they power our economies, and they keep our land healthy? It’s just pretty much assumed that an animal-intensive diet is good for us, and unfortunately the science shows otherwise.

Do you eat meat?

I would say that I am a less-meatarian. I am a cautious omnivore. I love to grow food. I do raise chickens, and a couple hogs.

Who do you hope will read the CAFO reader?

The idea was to show the concern, the analysis, the urgency for something different is shared by everyone. So my hope would be that anybody who considers it important might take a look and read a bunch of very different perspectives. I hope that people in Poland and Romania read it and maybe the Ukraine and Georgia, and anywhere else that the CAFO industry is beginning to set its sights.

The photo book that accompanies the essays comes out in September. What will we be seeing there?

I think what you will graphically see is the doors of CAFOs pulled back. It’s going to show what the industry doesn’t really want you to know about food production. What I’ve heard from people on the press in China is that the book has changed their view of humanity and food.

We’re already talking about the 2012 Farm Bill. I was wondering if you could talk a little bit about what the ask could be around regulating CAFOs more effectively.

One of the most egregious current programs in the Farm Bill is the Environmental Quality Incentives Program. [Through this] a single CAFO operator is eligible to receive up to $450,000 for waste treatment investment, things that if you were an industry, this would just be a cost of doing business. So the one thing we could do is absolutely stop paying for [this]. Then we certainly have to move away from a system of maximizing corn-harvest feed production toward a conservation-based approach to agriculture. And that would be taking the direct payments out of the commodity title. That money that goes to a farmer every year, whether they farm or not. Those payments [should go] toward some kind of green payments, conservation- based program. What would we do if Wendell Berry or Wes Jackson was in charge of the Department of Agriculture? I think what they would say is what we really need to change this discussion from the animal grain-based production system that we have right now and go toward a more perennial, deep-rooted, pasture-based agriculture.

What you called “getting perennial by the next centennial?”

Yeah. It’s going to mean fewer animals. It’s going to mean soil protection and carbon sequestration, and a much more conservation-based agriculture. It’s something that Big Ag and the farm community is not going to be crazy about in the short term, so it has to be incentivized. We have a great deficit in fruit and vegetable production. We import a huge amount of our fruits and vegetables, and this is the part of our diet, which the USDA is struggling to get back on the table. And they are saying that we need 13 million acres of fruits and vegetables. Hey, that should be in the Farm Bill. There’s lots of change to be had. One would hope at least that this administration could pull together the absolute best standards that the world has right now, adopt them, and force some big change.