Getting from Delicious to the Dirt, A Review of A Taste for Civilization | Civil Eats

Getting from Delicious to the Dirt, A Review of A Taste for Civilization 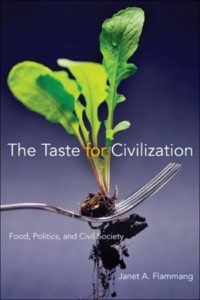 Don’t judge a book by its cover, they say. Well, I’m guilty. When I first glanced at Janet A. Flammang’s The Taste for Civilization, I was simultaneously smitten by the lovely image of a few leaves of arugula caught on a fork, roots and soil still clinging to the slender green leaves, and daunted by the subtitle: “Food, Politics and Civil Society”. Having been engaged in just those three topics for the past several years in a number of capacities—as a teacher, farmer, garden program designer, national program advocate and traveler, to name a few—I had a hard time imagining how one slim volume would tackle, much less try to build a cohesive argument while engaging with, the entire complex web of our food system. I turned the page and began reading, and almost immediately I saw that I had in fact, for once, correctly judged a book by its cover.

Flammang is an articulate writer and a skilled academic. Her book draws upon a tremendous range of sources, from interviews with community members and farmers to high-level intellectual thought from philosophers, political scientists, sociologists, epidemiologists… suffice it to say, she’s done her homework.

I found myself nodding my head in agreement as she declares that we, as a society, must make more room for “food work”—anything that must be done in order to grow, purchase, prepare and consume food—and that the skills picked up when one regularly sits and eats at the table with friends and family—conversation, manners, food culture, family and community cohesion, etc.—are inarguably valuable to building active citizens and healthy eaters. And yet, as I read, I had the distinct sense that Flammang was writing this book more because she personally loves food and the booming local and sustainable agriculture movement than because she found one central point worth defending.

My skepticism that Flammang was attempting to tackle too much in one book proved deserved. She did indeed try to tackle the whole of our interaction with the enormous topics of food, agriculture, civic engagement and eating culture with far-reaching umbrella titles including “Household Foodwork”, “Table Conversation”, “One Woman’s Revolution”, and “Community Food”. In enthusiastic agreement with her points, I too use food as a lens to criticize gender roles in domestic and career life, to urge us to slow down in this fast-paced society, to encourage deeper engagement in our communities rather than our cell phones and iPads. And her historical explorations were, if familiar to me, fascinating nonetheless. Recipes from early American cookbooks, tracing crops that have moved across cultures and made their way into the hodge-podge of American food culture, studies documenting the myriad benefits of sharing a meal with family and community members all engaged and interested me.

However, her arguments stretched too far. Take Flammang’s discussion of food systems reform as an avenue for change in all aspects of our daily lives, for example. Though I share with Flammang an imagined nostalgia for the days when victory gardens produced a significant percentage of Americans’ fruits and vegetables, I acknowledge that we live in a changed time, when the cost of living is markedly more (even if you do opt a simpler lifestyle than that which our consumer culture advocates). The realities of rapid urbanization, population growth, real estate speculation and suburban sprawl are threatening our ability to procure land on which to grow food, no matter how adamantly we want to produce food more self-sufficiently. And though I wholeheartedly agree that hunger is a tremendous issue in the U.S. today, I happen not to think that that Alice Waters’ “delicious revolution” (a central, seemingly pet subject, of the book) included hunger and social justice as some its core tenants in the days of its inception, nor do I think Waters was the original organic, local food pioneer. How about our elderly gardeners that never stopped using natural methods to produce food in vacant lots, backyards, and containers, many of whom are non-white and grew food out of necessity, not a desire to reform the system.

When it came time to conclude, I hadn’t been swayed in any particular direction. It seemed Flammang had spend so much time reaching into as many corners of our society’s food and agriculture, past and present, that she lost her focus. I finished each chapter feeling as though it belonged on its own, as an academic article or, better yet, simplified into an editorial for wider consumption.

But let me be perfectly blunt. Perhaps more than anything, Flammang’s writing is undeniably colored by a sense of place, a very particular place: Santa Clara, California. Now I’m a born and bred New Yorker, and so perhaps there’s a bit of coastal competition at this point’s core. But having traveled extensively in my work with food, both in the U.S. and internationally, I find that increasingly, the Californian arguments (particularly those hailing from within driving distance of the Bay Area) are only tangentially relevant to many of the rest of us. If I had only ever experienced food work in a political climate that normalizes the radical and comes coupled with near-perfect growing conditions (which allow for year-round local sourcing of food), I too might find it appropriate to preach that buying local, gardening and taking time to cook Chez Panisse style are the key to social change. But I don’t. I live in a city of nearly 9 million people whose sprawling suburbs have managed to deaden once thriving farmland, and continue to do so at an alarming rate. And, though I do believe reform in food and agriculture as crucial components to changing our health, environment and city-scapes, after having spent time working with agriculture and sustainability initiatives in impoverished regions of South Africa, Brazil and Turkey in the last few years (not to mention our own pockets of near third-world poverty, which include Bedford-Stuyvesant, Brooklyn; Detroit and Flint, Michigan; rural Oregon; and Newark, New Jersey), I find myself more and more frustrated that our arguments (and in this case, Ms. Flammang’s) aren’t harder-hitting, more precise and more willing to engage with the uncomfortable and terribly complex issues of race and class in our food system specifically, and society overall.

If we’re going to talk about civil society, we need to focus on promoting reform that doesn’t shy away from more explicit focus on access to land and food in terms of cost, location and cultural appropriateness. I’m reminded of just how relevant these rifts in cultural perception and experience are in my day to day as I work with at-risk youth in Brooklyn. My understanding of and passion for food systems work comes from a different place than my students’, and the issues that drive my daily decisions are not the same as those that do theirs. Turning off the TV during dinner won’t make broken families whole again, nor will demanding fewer work hours in order to promote cooking at home help struggling families earn the money they need in order to purchase good food. Though I found Flammang’s writing engaging and well researched, I’m ready for us, particularly those of us with resources, media outlets and time to articulate our views in writing, to stop focusing on the feel-good benefits that make food reform so palatable.

The academy has its place, but when it comes to re-engaging our youth, reviving our agriculture and dealing with the abysmal state of health—both of individuals and communities—in the U.S. today, we need to get out into the world and into the dirt. We’ve got a lot to dig through.