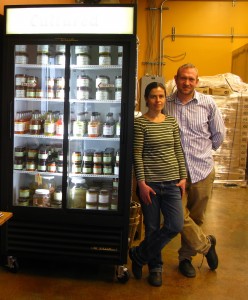 Nothing unusual there, right? Millions of women crave pickles to combat morning (or all-day) sickness. But Hozven’s obsession with fermented foods didn’t end once her baby was born.

Instead, she set out to master making naturally fermented foods (no vinegar, water, or heat) like sauerkraut, kim chee, and kombucha with a locavore sensibility and seasonal twist –  and built a thriving business that now supports a family of four.

Self-taught Hozven and her husband, Kevin Farley, run Cultured Pickle Shop, a small store in West Berkeley dedicated to preserving pickling traditions from around the globe, though the two profess to a particular fondness for Japanese methods.

The tiny store-front boasts a spiffy commercial kitchen — complete with a fermentation cave, where large steel tanks sit filled to the brim with pickling vegetables for, on average, about six to eight weeks. (Pickling, it turns out, is the ultimate slow food). The pair package their products and teach classes on canning and pickling here as well.

And we’re not talking plain ol’ dill pickles. Hozven’s specialty line includes innovative spins on familiar foods such as seaweed sauerkraut, kim chee with mustard greens and red spring onions, and carrot kombucha (a fermented drink prized for its active cultures, called probiotics, said to have a host of health benefits). Seasonal pickles include rhubarb with spring onions and oregano and beets with fennel. Cultured uses about 2,000 pounds of organic produce a week (mostly sourced from Riverdog Farm) for its raw products.

There is renewed interest in the Bay Area and beyond with old-fashioned food preservation techniques such as canning and pickling, as people turn to traditional methods of putting up produce at home. Cultured recently received a coveted nod from Food & Wine as a “best new shop for obsessive foodies,” kudos in the Berkeley Bites column from Revival chef Amy Murray, and is featured on a CHOW video, where you can watch Hozven wax wondrous about all manner of pickling matters.

The couple, both 39, live in South Berkeley with their two school-age sons. I spoke with the passionate picklers while they tended 5-gallon glass vats filled with jelly-fish like cultures and jarred mulit-colored krauts at the store. 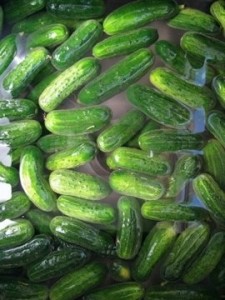 What did you think when Alex announced she wanted to start a fermented food business?

Kevin: I thought she was crazy. But she did it. And then in 1997 she asked me to quit my job and join her, because she was so busy, and we haven’t stopped working since.

What’s good about owning a food company in this town?

Alex: We have a good audience who don’t balk at the idea of spending a large part of their income on food. The average price for our products is about $8.

And they have a good base level of knowledge about food. I’m not sure I could run such a specialized food business anywhere else in the country.

Are there challenges running a small business in Berkeley?

Alex: The city bureaucracy is time consuming, expensive, and not very small-business friendly.  It cost us hundreds of dollars and took eight weeks just to get a little sign in front of our store approved. But I never thought of setting up shop anywhere else. We live here and we love the Berkeley Farmers’ Markets.

Can you explain why you like selling fermented foods in particular?

Alex: I like telling people about how naturally fermented foods are their own food group, part of a time-honored tradition in many cultures, and they benefit digestion. They’re vibrant, alive, and they add that zing, zest, or, pow on the plate — they’re a great flavor addition to the diet.

How is it working with your spouse all day?

Alex: I love hanging out with Kevin. That part has always been easy. It’s not like we separate our personal life from our work life, it’s just one big life at this point. Ninety-nine percent of the time we get along great.

Kevin: I couldn’t imagine having totally separate lives, as other couples do. We’ve always just been together, we like learning things together, whether at home or at work. I sometimes wonder how other couples maintain their relationship, when they hardly spend any time in the same place.

Is there anything tricky about combining your personal and work life?

Alex: For that one percent of time when we’re not getting along…it can be trying.

Kevin: If we’ve had a fight it can be uncomfortable…a bit like a cold war…but it doesn’t last long. 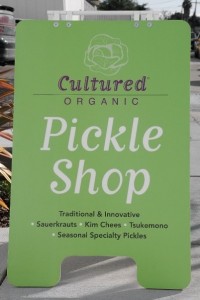 You’ve been doing this gig for over a dozen years. Your thoughts on that?

Kevin: I’m super proud of us. We started a business, we’ve survived, we’ve been able to buy a house, open a store, and we make a product we feel really good about. And that’s all because of Alex.  I provide a set of muscles, a sound work ethic, and I’m good with the kids. Alex brings energy, an amazing palate that she’s honed over the years, and a great business sense to the table.

It’s definitely her business, if Alex were to decide tomorrow she didn’t want to continue with Cultured that would be it.

Alex: I work six days a week and spend 70 hours a week thinking about what I do. It’s just a huge part of who I am and I can’t imagine doing anything else.

This post also appears on Berkeleyside, as part of the Berkeley Bites food-focused profiles each Friday.