The Art of Ant Agriculture: A Conversation with an Entomologist | Civil Eats

The Art of Ant Agriculture: A Conversation with an Entomologist 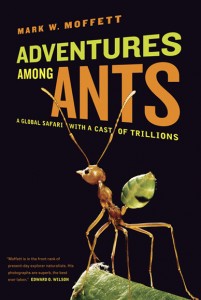 Leafcutter ants engage in monoculture practices just like we do but with much stricter public health and safety guidelines that would put our own National Organic Program standards to shame. What do these ants know that we don’t? I spoke to Mark Moffett, Research Associate in Entomology at the Smithsonian Institute and author of Adventures Among Ants: A Global Safari with a Cast of Trillions to find out.

You had an ant encounter in Ecuador that signified for you the very origin of agriculture – can you tell us about that?

I was on the shores of the Napo river in Ecuador, which is an enormous tributary of the Amazon, watching two enormous streams of ants flowing by, one on either side of me. One was a swarm of army ants, which are highly predatory, taking back to their camp all kinds of pray like scorpions and spiders. On the other side of me was a column of the leafcutter ants, which are entirely agricultural — they don’t eat any meat. This made me reflect on the fact that these are the two dominant groups of ants in the American tropics, each of which can have colonies in the millions, extremely successful, huge societies but with a completely different way of organizing their lives. Humans have shown the same kind of extremes over history, from nomadic herdsman to sedentary agriculture people. These ants have the same thing going on — the predatory army ants tend to be nomadic, they shift around a lot; while the leafcutters have huge well-set cities with complicated layouts to raise their crops. Most of us don’t think of the leafcutters as being agricultural because they are carrying leaves that they get from nature, but as it turns out they use these leaves to grow their crops.

And this crop would be…?

Fungus. They grow fungus, they are mushroom-loving ants…the modern leafcutter ants raise this fungus and are entirely dependent on it.

They turn the leaves into a mulch, it’s very soft stuff. A fungal garden can be the size of a human brain and about the same color, a sort of a gray cast with microscopic apple-like growths merging by the many thousands into a uniform gray fuzz that only the ants appreciate as food. The fungus has all the nutrients they require. 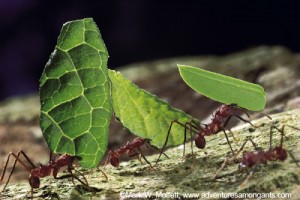 How many fungi does one colony need?

The number of ants in these colonies can go up to a few million, and they can have thousands of these chambers with these gardens in them going down 20 or even 30 feet into the ground. That’s a lot of ant miles. One colony’s worth of fungal gardens can weigh hundreds of pounds. They are huge monocultures, and the ants have domesticated this fungus so thoroughly that it cannot live in the wild.

This sounds like a large scale operation – do you consider this industrial farming?

Yes, this would be industrial farming. The earliest of these agricultural ants, before the leafcutters came along, would raise the fungi on manure. They had very simple, small societies. Their crops were healthy, they didn’t have disease problems, but they couldn’t grow them on a large scale. So the modern leafcutters, once they domesticated their crops 12 million years ago, could explode their populations into the millions much like humans did after we similarly invented mass agriculture. But like us the ants now have to constantly manage every aspect of their crops. The modern ants have a complete assembly line up the standards of Henry Ford, all these different sized ants in a colony do different things, some of them weed, some of them plant the new fungi, some feed the young. There is a whole assembly line as well in cutting the leaves, taking them back to the nest, chopping them, turning them into a mulch, adding them to the gardens, keeping the gardens healthy, replanting the gardens and then removing their waste. Everyone is doing a different task, it’s very, very organized, and it’s definitely like a factory.

That’s why ants use pesticides — they grow some from their bodies, but they also grow a type of bacteria related to the penicillin bacteria that they then apply to their gardens. It knocks out the major diseases. The ant workers are moving pesticides around all the time.

So these pesticides are environmentally friendly?

They seem to have gotten a pretty biodegradable, healthy pesticide choice going on there.

With all the fungal gardens and the ants and the traffic, would you say these colonies suffer from a good degree of air pollution?

The huge colonies have to manage the airflow just right to get enough oxygen down to their gardens. Above ground they end up with these huge turrets — you walk into a rain forest and see these nests can be enormous, covering an area half the size of a tennis court with these turrets around their perimeters. If you put your face up to a turret, you can feel the hot air coming out. The ants actually organize the corridors down beneath the ground so that the hot air goes out of those exterior turrets, drawing cool air through the gardens to keeps everything cool and fresh.

So ants have been cultivating their own food for 50 millions of years, long before us, and they are surviving heartily today…what’s their secret?

If we compare ourselves to the ants, in terms of managing our environment and health – well, let me just say that if ants were in charge, there would be no giant oil spill off the coast of the Gulf of Mexico. The ants put a lot of effort into making sure their environment is very healthy in every way. I suspect their investment in environmental safety is ten times what humans put out. Of course we humans are just figuring out how critical public health issues are. So this is a word to the wise from nature: given similar problems and conditions, the ants have evolved a much more serious ability to deal with environmental issues at their small scale than we have at ours.

The gardens are precisely regulated, their temperature, the humidity, any weedy things that enter in to their system are removed instantly, any diseases are micromanaged. They do things that might be impractical for us, putting their gardens into hundreds of separate chambers so if any one of them has a problem the ants can cordon it off, and keep it separate from the rest of their society. Everything about their organization has a redundant fail safe to it.

You have said that humans are only recently learning the value of “green” investments that “have been the common currency of ants for millennia.” What should we know about these green investments?

Relative to their size, ants invest a huge amount in public health and safety, much more than humans do, especially these ants with their gardens. They have to be very cautious with big monocultures, as much as we do to protect ourselves from the next potato blight. Because what has happened with these ants is they have bred their cultivars so thoroughly that they have lost a lot of their genetic diversity, much as we have done with our modern crops, which means both our crops and theirs are very susceptible to disease. As a result the ants have to be very meticulous. They sow their crops, they weed them, they cull them, they manage their waste, they treat them with pesticides, they do everything a human farmer would do but often with far more care, particularly in terms of health issues. They have sanitation squads that remove every trace of a foreign weedy fungus from their gardens, including diseases, and isolate them in deep underground chambers used only for waste. And the workers that live in those chambers aren’t allowed to come back into regular society; they are full time waste managers doing a very dangerous job. Those chambers are the deepest in the ant colony, and can be a big enough that even a human could fit in one. You can only imagine how many centuries of ant hours are required to dig a chamber that huge, that far under ground by these little ants…

We have to start taking the health issues of crops and the environment more seriously. Ants have made more of it than we do, and they have survived in stable way with their crops for 50 million years. Humans are still in an up and down cycle, where food becomes scarce one year and adequate the next. We are still working out the kinks…through it all, ants have invested a lot more energy and time into their food in their daily lives than we humans do. We tend to take food for granted.