Eating With Your Senses, a Conversation with Deborah Madison | Civil Eats

Eating With Your Senses, a Conversation with Deborah Madison 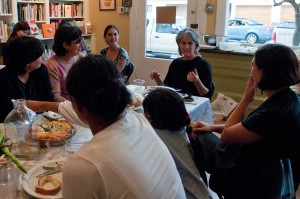 Deborah Madison’s books — including The Greens Cookbook, Vegetarian Cooking for Everyone, and her latest, Seasonal Fruit Desserts — have inspired multi generations in the art of preparing delicious, seasonal food. Now a chef and bestselling cookbook author, Madison was the founding chef of Greens Restaurant and has received the M.F.K. Fisher Award, the International Association of Culinary Professional’s Julia Child Cookbook of the Year award, and three James Beard awards. In addition to writing on food and farming, she has long been active in Slow Food and other groups involved in local food issues.

I just had the pleasure of sharing a potluck meal prepared for her, hosted by 18 Reasons at Omnivore Books, and featuring dishes from her recipe collection. (Full disclosure: I’m a board member of 18 Reasons.) We chatted about recipes, home cooking, and the importance of saving seeds.

Your first cookbook, The Greens Cookbook, introduced vegetarian cooking to the masses, and has been in print now for nearly 25 years. To what do you attribute its magic?

To be honest, it’s puzzled me a little because I think I’ve become a much better recipe writer since Greens. I always view a lot of those recipes as restaurant recipes, which are more complex than we’re inclined to make on a regular basis. But, so many people have said that they really use that book—and have shown me their worn copies as proof—that one day I sat down and went through it and realized that in fact there are a lot of very straightforward, very delicious recipes in it. It’s far more usable than I had thought, but also, I do think that the connection to the restaurant helps.  People eat the food there, like it, see the book and it all lines up.  I did work really hard to make sure the results for the home cook would not disappoint.

It took you seven years to write Vegetarian Cooking for Everyone, often referred to as the “bible” of vegetarian cooking, but I’ve heard from many omnivores that it taught them how to cook. What have you learned most from this book?

I have learned that, just as I thought, the appeal of this book isn’t only to vegetarians.  So many people have told me that they aren’t vegetarian, but that they learned to cook vegetables from this book and to use more plant foods than they had ever imagined. And that’s why the title includes “For Everyone.”  Actually, I would have done away with the word vegetarian altogether, but “Plant Foods for Everyone” did not have the right ring. The benefits of eating plant foods is universal, whether or not one includes or excludes animal food from their diet, and the readership of the book pretty much upholds that belief. I also learned that it has taught many people how to cook, or so many people have told me, and that makes me really very happy.

You recently wrote that watching other people prepare dishes from your cookbooks has taught you valuable lessons. Can you share a few of those with us here?

We all have our tendencies, and one of mine is to cut things rather finely so my food tends to have a certain look as well as taste. But one day someone made a vegetable ragout from The Savory Way and she cut everything into big rough chunks and it looked great! And I’m thinking, how is it that I haven’t seen food that way?  On the other hand, I’m not big on evenness and exactitude, so when I spied a home economist at a magazine cutting up vegetables for a dish of mine, using a ruler and making sure everything was cut into perfect cubes, I was horrified.  It looked like frozen food and I begged her to relax her efforts a bit and cook like she might at home.  So even though I do tend to be precise, I learned that I’m not exact, and there’s a big difference. Sometimes I have not even recognized “my” food because of the way another person arranged it on a plate and sometimes I’ve been inspired by what I’ve seen that’s different.  But what I love about this is that we are in fact all different and we express our nature in these little ways. A recipe is a weak thing in front of one’s nature.

How has your cooking changed over time?

It’s definitely not geared toward restaurant style anymore. It’s simpler. I’m a home cook and I think that shows, and not always for the best. Now that I live in New Mexico, I don’t have the same wonderful variety of produce I use to have when I lived in California and I miss the inspiration that it used to give me.  I realize now more than ever that having food that is alive and interesting is really important for being a creative cook, which means I’ve put more effort into my garden. I use less cream than I used to and I’m now crazy about ghee.

Whether a recipe card, a letter, a scrap of paper, when it’s handwritten, or even typed—I can always recognize my mother’s typed recipes, for example, a weak key or a faded ribbon give them away—each one brings a person to mind. The whole person. I look at a piece of blue onionskin paper with a beautiful penned recipe from my grandmother and suddenly I see her again, hear her voice, recall her kitchen, her life. Epicurous just can’t do this.

You have said, “The way I see it, we eat with our senses, not a belief system.” Can you expand on this?

I’m just not inclined to eat a food because someone has told me about its nutritional virtues, but I will respond to food that is ripe, aromatic, and beautiful; that is, it’s sensual qualities, whether it’s a potato or an apricot. I’ll respond to a dish that is likewise beautiful, enticing, and smells irresistible. I want to lure people by goodness, not by numbers. And there are not numbers, no breakdowns of components, in any of my books, even though some people actually feel that there should be.

What inspired you to write your most recent book, Seasonal Fruit Desserts: From Orchard, Farm, and Market?

Many things, actually. It was originally called “Desserts for the Pastry Impaired,” because not only am I somewhat impaired when it comes to elaborate architectural desserts and dough, but I believe other people are, too. It’s now hard to find the quiet solitude sometimes needed to roll out a pie dough if it’s not in your blood. I wanted to approach dessert as a cook, not as a pastry chef, which is bound to be a bit more finicky, and that led to fruit because, like vegetables, you can poach, sauté, roast, braise, and do so many things with fruit. And the led to the fact that most fruit is dreadful unless you get yourself to a farmers’ market, an orchard, or into your own backyard and become a hunter-gatherer of sorts.

As a board member of the Seed Savers Exchange, why is saving seed so important?

If people hadn’t saved their family’s seeds and the SSE hadn’t connected people and their seeds to one another, we would have lost many great stories, plants, and in short, much of our historical culinary culture.  The old open-pollinated plants, many of which are so wonderful and dear to us, can disappear if seeds aren’t saved and also, exchanged. So that’s one reason: to keep plant diversity alive and well so that we’re not all dependent on hybrids that come and go. Some gardeners and farmers may also save their seed so that they don’t have to buy it again, or to hedge against hard times when seed might be needed but not available.

What’s inspiring you these days?

Food history. Farming and farmers. Plants. How to grow good food in challenging environments, like New Mexico. How good food, real food, can be made available to all those who want it, not just those who can afford it. And that leads to food politics, of course. Why can’t we all afford it? And teaching people to get a handle on some fundamentals of cooking so they can make use of the wonderful produce we do have today.

Originally published on Inside Scoop SF