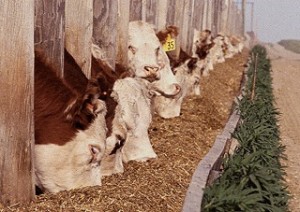 Leadership at the U.S. Food and Drug Administration (FDA) made it abundantly clear last week that the low-dose usage of antibiotics in food animals, simply to promote growth or improve feed efficiency, needlessly contributes to the emergence of antibiotic resistant bacteria and poses a serious threat to public health. Despite the fact that the FDA is taking a hard-line stance on the issue, I find it frustrating to see that the agency appears to be hamstrung from taking the necessary steps to mandate industry to end the risky practice. Even more exasperating, is that it appears that the FDA may actually relax a current directive that already regulates antibiotic use. However, unlike many critics I don’t believe that this is an example of the Obama administration buckling under industry pressure. Rather, I view it as a loud and stern call for Congress to take action. Producers concerned more about profit than protecting public health are not going to cut their dependence on non-therapeutic antibiotic use in food animals unless lawmakers pass strict legislation.

Last week, the FDA fired a serious warning shot across the bow of industrial food animal producers stating in a new draft guidance that it expects industry to change its antibiotic use practices. The draft guidance asks for two simple things: stop using “medically important” antibiotics as growth promoters, limiting use to only treating sick animals; and ensure that producers do not administer these drugs without veterinary supervision. Unfortunately, the FDA says guidance documents, “do not establish legally enforceable responsibilities.” Why didn’t leadership go a step further and issue a proposed rule? I’ll address the possible answer in a moment. But what has me scratching my head are discussions about potentially changing a current medicated animal feed rule that’s already on the books.

The FDA recently sent out a notice warning that it might modify its veterinary feed directive (VFD), citing informal complaints that the rule is “overly burdensome.” The VFD was issued 10 years ago in response to the passage of the Animal Drug Availability Act of 1996, which required the FDA to regulate the approval and marketing of new animal drugs and medicated feeds. Any medicated feed that falls under the VFD category can only be used under the supervision of a veterinarian. According to the American Veterinary Medical Association’s website “the purpose of the added professional control is to reduce the rate of development of [antimicrobial] resistance and thereby prolong the period of effectiveness of the medication.” It is important to note that the VFD only applies to new drugs and that feeds containing approved antibiotics before 2000 can and are sold over-the-counter without a prescription or supervision of a veterinarian.

So, if the FDA Principal Deputy Commissioner Joshua Sharfstein went out on a limb to call the overuse of antibiotics in food animals, “an urgent public health issue,” why would FDA consider changing a 10-year-old rule that could relax regulation of antibiotic use even further? That’s exactly what the American Academy of Pediatrics, The Pew Charitable Trusts, Union of Concerned Scientists, Institute for Agriculture and Trade, Food and Animal Concerns Trust and Humane Society of the United States want to know. Back in May the organizations sent a list of specific questions to FDA Commissioner Margaret Hamburg regarding the Advance Notice of Proposed Rulemaking (ANPR):

·      From whom did the [overly burdensome] comments come – the industrial farming industry, veterinarians, or other stakeholders?

·      The FDA suggests that the ANPR is being undertaken to help “improve the program’s efficiency.” Since the primary requirement of the program is that veterinarians provide oversight on the use of certain drugs, does improved program efficiency simply mean less meaningful oversight from licensed veterinarians?

·      How is the ANPR consistent with Deputy Commissioner Joshua Sharfstein’s July 13, 2009, testimony that, “protecting public health requires the judicious use in animal agriculture of those antimicrobials of importance in human medicine…FDA also believes that use of medications for prevention and control should be under the supervision of a veterinarian?” (emphasis added)

Late last month the FDA decided to extend the comment period on the ANPR for an additional 60 days, after receiving complaints that the original 90-day comment period was not enough time to develop “meaningful or thoughtful response.”  That means the public now has until August 27 to speak up. If you’re interested in writing a response you may first want to read a new study published in PLoS One which links antibiotic use on veal calf farms in the Netherlands to a new strain of methicillin-resistant Staphylococcus aureus – ST398 (a.k.a. Staph superbug.) The authors say this is the first study that shows “direct association between animal and human carriage of ST398,” and that this latest revelation warrants the prudent use of antibiotics on the farm.

While I don’t want to see the VFD weakened in any way, I am more concerned about the medicated feeds that are not covered under the directive. Which is pretty much everything except the two drugs that have been placed under the VFD category. The Union of Concerned Scientists (UCS) estimated in 2001 that as much as 70 percent of all the antibiotics sold in the U.S. were used to promote growth in food animals. And yes, there are plenty of cases of irresponsible antibiotic use going on in people, but it doesn’t compare to the amount in animals. The UCS claims “nearly 13 million pounds [of antibiotics] per year – are used in animal agriculture for these non-therapeutic purposes. This amount is estimated to be more than four times the amount of drugs used to treat human illness.”

Of course industry disputes this claim. The Animal Health Institute – an organization that lobbies for pharmaceutical companies such as Bayer, Pfizer and Novartis – told the New York Times that it estimated only “13 percent of agricultural antibiotics were used to promote growth.” As Times reporter Gardiner Harris keenly pointed out, if the FDA, “some day bans growth promotion as a use, there is a chance producers would simply relabel such uses as preventative.”

While serving as the communications director for the Pew Commission on Industrial Farm Animal Production my colleagues and I met with AHI staff in 2006 to discuss antibiotic use in food animals. They were trying to “redefine” therapeutic and non-therapeutic uses of antibiotics even back then.  They presented us with similar statistics. It wasn’t until we started discussing the use of antibiotics to prevent production diseases, such as liver abscesses in feedlot cattle (ruminants, designed to eat forage such as grass or hay, that are finished on grain can develop several metabolic and infectious diseases), that we began to realize they were lumping the use of antibiotics to make up for poor living conditions and animal husbandry in the same therapeutic category. There are some hard-liners who would argue medicating animals to prevent “production diseases” should not fall under the “therapeutic” category as well. Keep in mind, regardless of the definition, these low-dose treatments can still lead to the emergence of antibiotic resistant bacteria. And FYI, studies reveal cattle switched from grain-based diets to hay were less likely to shed the deadly antibiotic resistant bacteria E. coli O157:H7.

So, why hasn’t the FDA called for an outright ban? Industry has thwarted the agency’s attempts to end the non-therapeutic use of antibiotics for more than three decades. If history were any indicator, a call for a new ban would most likely end with the same fate. I am certain that if FDA leadership decided to release a draft directive last week, rather than a draft guidance, industry would already be preparing to take the FDA to court. At best, a court action could tie up any rule for years; at worst, it could set back future regulations by another decade or more. That’s why public health will remain at risk until Congress takes action and passes legislation designed to end the practice once and for all.

While it is not perfect, there is proposed legislation on the table right now entitled the Preservation of Antibiotics for Medical Treatment Act (PAMTA). Congresswoman Louise Slaughter introduced the latest version of PAMTA last March. The bill calls for:

·      Phase out the non-therapeutic use in livestock of medically important antibiotics;

·      Require this same tough standard of new applications for approval of animal antibiotics;

·      Does not restrict use of antibiotics to treat sick animals or to treat pets and other animals not used for food.

More than 300 organizations including the Center for a Livable Future, American Public Health Association, American Medical Association, and National Association of County and City Health Officials support the passage of the PAMTA.

The American Veterinary Medical Association (AVMA) is vehemently opposed to PAMTA. Dr. Michael Blackwell, public health veterinarian and vice chair of the Pew Commission on Industrial Farm Animal Production, says that to his knowledge, “the AVMA remains the only major medical or public health organization not recommending changes in agriculture practices to help ensure sustainability where the use of antimicrobials is concerned.”

Dr. Raymond Tarpley, AVMA member and retired Texas A&M professor, recently submitted a post for the Livable Future Blog imploring the AVMA to change its stance on antimicrobial use in food animals. The AVMA and industrial food animal producers claim that the benefits of low-dose antibiotic use to efficient production and food safety outweigh the risk of developing more antibiotic resistance. Dr. Tarpley says that view, however, is only valid in the context of the current unhealthy industrial animal production environment:

… where disease risks can be heightened and growth rate performance reduced by stressors such as poor ventilation and hygiene, inadequate temperature regulation and animal crowding interfering with natural behaviors. Elevated risks have led to a dependence on low-dose antimicrobials to compensate for these suboptimal husbandry practices made worse by large numbers of animals producing large quantities of untreated wastes that often trigger respiratory distress in a microbially rich environment.

When it comes to the FDA’s draft guidance on antibiotic use in food animals, the fact that FDA leadership is willing to take a hard-line stance on such a politically charged issue is commendable. I understand the argument that change takes time and that the agency must be methodical in its approach, especially when the powerful food animal and pharmaceutical industries will do everything they can to thwart it. However, timing is everything. If the FDA believes it cannot take a stronger stance now, then Congress must move on PAMTA. As Congress faces another potential shift in control, if PAMTA fails passage this year, I fear it could be another decade before we see an end to the irresponsible use of antibiotics in animal agriculture, and by then it might be too little too late.