Stephen Colbert and Farmworkers to America: Take Our Jobs, Please! 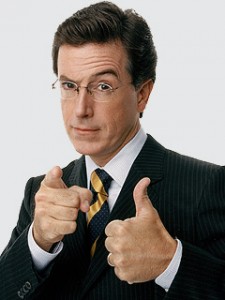 A few years back I was in a church basement in Oklahoma City preparing a meal for a busload of Florida farm workers on their way home from California.  They had gone there to stage a protest at Taco Bell parent corporation Yum! Brands HQ.  Their humble request? Two cents more per pound of tomatoes picked by their compatriots in and around Immokalee, Florida, so that they might be lifted out of near-and-actual slavery.

The Coalition of Immokalee Workers eventually won that fight and many others like it, but their lives in the tomato fields there are still by no means easy.  It’s backbreaking work in the hot Southwest Florida sun, with long hours, poor housing and little to no free time.

Recognizing though that there are unemployment and immigration problems in this country, the Godfather of a farm worker movements – The United Farm Workers – has come up with an innovative solution.  Their suggestion: Take Our Jobs!  That’s right, all the folks who are out of work and feel that undocumented workers are taking jobs that should go to American citizens like themselves are invited to apply online and join the exciting field of manual farm labor!  Apply now!

They have even enlisted just the right spokesperson to help them in this tongue-in-cheek campaign: none other than Stephen Colbert, the whip-smart, piercing wit of Comedy Central’s The Colbert Report, who will feature the campaign in his July 8th broadcast.  Known for his uncanny ability to make a point by arguing sardonically for the opposite side of that point, Colbert is just the person to take up this issue.

The point of all this of course is that migrant workers, roughly 75% of whom were born outside the US and an estimated half of them undocumented, are not in fact taking away jobs from Honest-to-Glenn-Beck Americans.  They are doing jobs that are vital to our national economy and that no one else will do.  For better or worse, this has always been the lot of the new arrivals in this country – they end up doing the grunt work, and those that do it well eventually make it possible for their kids and grandkids to have a better life.  It’s what my great grandfather did when he was an immigrant to our shores over 100 years ago, and very likely what some of your ancestors did as well.

While they are using humor, the point is a serious one, and they mean it when they say they will connect applicants with actual jobs in the fields – the one place where there is still a serious labor shortage in the country.  It’s put-up-or-shut-up time for the anti-immigrant front.

Next I hope they will find a way to extend the program one more notch up the food chain into the slaughterhouses, where conditions are no less abhorrent.  Shining a light on that industry is long overdue.

So if you know people who are looking for work, be sure to tell them that the UFW says, “Take our jobs, please!”  Henny Youngman would be proud.