Emperors Need Mentors, Too: A Review of My Empire of Dirt | Civil Eats

Emperors Need Mentors, Too: A Review of My Empire of Dirt 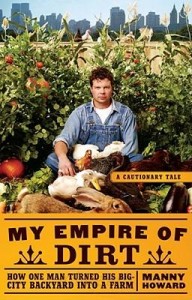 Manny Howard’s new book, My Empire of Dirt, is haunted by the living ghost of Wendell Berry.  First there’s the epigraph by Berry in which he instructs us on how to “use land well,” and it includes knowing and loving the land, and using the right tools. (To paraphrase a master, poorly.)

Then, early on in Howard’s recounting of a season spent trying to turn his south Brooklyn backyard into a homestead, the voice of Wendell Berry comes to him, offering further wisdom. Only problem is, Howard confesses in the epilogue that “On the Farm, Wendell Berry girded me.  Not that I had ever read a word he’d written until I was back at my desk, trying to make sense of the year.” Huh?

As a gimmick for a magazine article—which this book started out as–I suppose this premise makes sense. “You like locavorism New Yorkers, well locavore this!” Smart, quirky journalist, looking for a new drug, seeks quixotic project sure to provide (mis)adventure and a cover article, all while basking in the local-food-cum-DIY zeitgeist.  If the piece that resulted a few summers back in New York magazine made you squirm, then I hate to think what you’d make of the long version. Howard enters into his project recklessly, voraciously, cluelessly. Many animals were harmed in the writing of this story. He sawed off his own finger, too.

For me (a first-time grower trying her hand slowly at windowsill tomatoes and basil as well as some Kentucky Colonel Mint) the core lesson here is about new farmer development.  What does it take to learn how to farm and do we have a system in place right now for people to do so? One can try to learn to farm Howard’s way, flailing about with expensive hydroponic systems but no instructor, or one of his other trials and subsequent errors.  It’s no surprise, though, that at the end of the book he is no farmer.  He has relinquished most of the endeavor and is a man with a couple of backyard chickens and a vegetable patch. I am somehow reminded of something I heard Will Allen say: that he wanted apprentices at Growing Power who plan to be farmers. That he doesn’t want people there dicking around for a summer (once again, to paraphrase a master, poorly).

A person who truly wants to learn how to farm in this country has some pathways to begin, but I think we can all agree that there are not enough of them.  Apprenticeships are a good start for many new farmers–but they are just a beginning, and in some places, like California, they are under threat. How can we help new farmers find mentors? And find the time to continue their pursuits until they have not only found knowledge but also the meaning of their work?

Berry’s final words to Howard are about the place of knowledge, the importance of work, and the necessity of taking one’s time while working and then again afterwards to understand the work’s meaning and worth.  Howard’s experience bears out the need for mentorship (knowledge, work) and the need for duration (time).  He was a stranger in a strange land and because he did not have knowledge, instructors, or an experienced growing community to support and guide him in his work, he was not able to sustain it (nor sustain himself; for a variety of reasons, including a freak Brooklyn tornado, his farm produced little food).

I wish he had found Berry before he set out in his backyard.  But there is only so much you can learn from a book.  Even beginning with a conversation with a knowledgeable friend can help—that’s how I got this windowsill experiment started. Perhaps I wish Howard had found one or more of the many Brooklyn urban farmers and gardeners who have spent years now learning their way and teaching it to others. It would not have made for an article or book full of escapades and hijinks but he may have begun to root himself to the land and to the rich traditions of growing in that once-rural Borough, in that county of Kings.