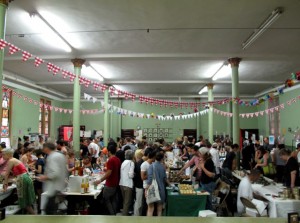 When the New York Times reported on the growing phenomenon of underground food markets in New York City earlier this month, the Greenpoint Food Market in Brooklyn was forced to shut its doors.

The Times article “put us on radar with the officials,” wrote Joann Kim, the market’s organizer and founder, in an email to market devotees. “Since then we have gone back and forth with the city trying to find a solution to how the market can keep its mission while adhering to rules and regulations.”

Kim, 26, began the market after baking for friends and family grew from a hobby into a means of providing supplementary income. “I didn’t find the right channels or environments where my goods were welcomed,” she said. “So I daydreamed of a flea market setting selling only homemade food made by people like me: amateurs with an inkling in the kitchen and a special recipe up their sleeve.”

As food safety becomes a growing concern nationally, these small, artisanal producers have fallen under scrutiny for preparing their goods in uncertified home kitchens, and selling food items without liability insurance or a permit. However, to meet these requirements would mean that pursuing most small food businesses would not make financial sense.

Nationwide, certain states have opted to relax food safety laws for small home producers, re-igniting debate around how to balance food safety with laws that allow for small food businesses to thrive. In New York State, baked goods, candy (except chocolate), jams, spices, and snack foods like popcorn are exempt from the requirement of using a commercial kitchen. In Maine, small farms are allowed to slaughter chickens and sell them directly to consumers without oversight, and one legislator in Wyoming hopes to do away with all restrictions for home cooks selling directly to consumers altogether. While opponents claim that these kinds of exemptions put the public at risk, small producers argue that the face-to-face relationship with their customers provides a different kind of food safety guarantee. 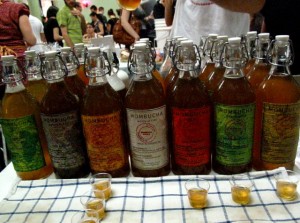 “As many restrictions, regulations, and safety guidelines our federal legislative bodies can dream up, people are still dying from Salmonella from processed meat or tainted vegetables,” said Rich Awn, who has sold kombucha–a fermented tea beverage–under the name Mombucha at the Greenpoint Food Market. “As responsible makers of healthy food, we know better than to serve a product that’s ‘unsafe’.  We’re making it in the same way we’d make it for ourselves, our friends, and our families and in the spirit of fellowship, we want to share it and sustain the process.”

Awn and Kim are part of a surging movement in which cooks often bypass culinary school and restaurant kitchens, preferring to cut their teeth in home kitchens. Kim speculates that the enthusiasm around becoming a “small batch food producer” could be related to both career experimentation as people lose jobs in this economic downturn, as well as an “interest in learning not only how to make food but knowing where it came from and who exactly made it.” She said, “the direct connection, the human interaction that you’re able to get at the food market gets everyone excited and builds a strong incomparable sense of companionship and community.”

However the market, she stressed, is not an end in itself. “People do not make a whole lot of money at the market,” said Kim. “[It] serves as an incubator for folks to test their product, to see if it’s viable, and if it’s something they can take to a bigger, vaster level within launching a food business.”

Last Saturday, in lieu of the market, Kim hosted a panel, featuring Bob Lewis, Chief Marketing Representative at the New York State Department of Agriculture & Markets; Sam Miller, Assistant Commissioner of the Intergovernmental Affairs Bureau at the NYC Health Department; Stephen Levin, Greenpoint City Council member; and a few of the producers, including Awn and Jessamyn Waldmen, the creator of the successful food and social justice venture, Hot Bread Kitchen. Over 50 people, many of whom have been vendors at the market, brought their empanadas, baked goods and prepared dishes to share as they participated in a town hall-style discussion about the future of the market. 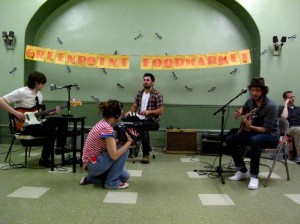 One of the most promising ideas the panelists spoke about was turning a 2,500 square foot space in Greenpoint into an affordable incubator kitchen for around 30 cooks. Foundation, private, and corporate donation money, as well as membership fees, would help keep the prices low for producers testing the viability for their product. In addition, operating like a cooperative would mean that participants could teach classes, or run the planned retail shop in exchange for kitchen time. “This is for makers who’ve been producing goods out of their homes, unregulated, who are ready to take the next steps to legitimizing their business and willing to contribute their skills, time, and creativity to the benefit of the cooperative on the whole,” said Awn.

For now, the Greenpoint Food Market intends to be up and running again on July 24th, but all participants will have to comply with permits and food protection regulations. Meanwhile, Kim will continue talks with the Department of Health around the possibility of using group permits or other measures to amend food policy as it pertains to small markets.

“Working with local government to open an incubator kitchen is not exactly what I had in mind when creating [Greenpoint Food Market],” said Kim. “But it’s a beautiful evolutionary process with some serious growing pains but with hopefully a happy ending.”