Kitchen Table Talks: The Farmer and the Fisherman Talk Water 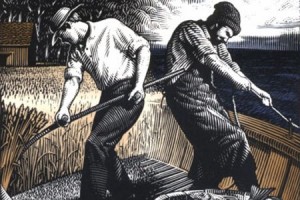 It is impossible to build a sustainable food system without addressing the issues surrounding water. The struggle over water in California is more than a century old and continues today with an $11 billion water bond, Proposition 18, proposed by Governor Schwarzenegger for November’s ballot.

Some portray California’s water problems as a farmer vs. fisher battle, but this is a simplistic, inaccurate depiction. Small and midsized farmers are just as concerned about the ecological health of the San Joaquin-Sacramento River Delta as the fishermen and women whose livelihoods have been devastated by the reduction in fish populations over the past several years. Additionally, many feel that continuing the status quo through the development of more dams on California’s rivers will benefit large-scale corporate agribusiness, not the family farms that serve local and regional markets. Anyone who advocates for sustainable agriculture in California needs to know about the state’s water politics.

Join us for the next Kitchen Table Talks in San Francisco on Tuesday, July 20, where we will bring together a fisherman and a farmer to share their stories and provoke thoughtful conversation about the ties between our water and our food.

The conversation will be moderated by Adam Scow, California Campaigns Director for the consumer advocacy nonprofit Food & Water Watch. Our fisherman is Mike Hudson, the president of the Small Boat Commercial Salmon Fishermen’s Association and former executive director of SalmonAid, the largest coalition of West Coast salmon advocates. Mike fishes out of the commercial fishing port of Berkeley, where in the summer he chases wild Pacific salmon and tuna and in the winter he catches crab.

Our farmer is Brett Baker, a sixth generation pear farmer from Sutter Island, California, as well as a biologist who has been studying the Delta ecosystem for several years, including one as the water and agricultural policy analyst for former Lieutenant Governor John Garamendi.

Come take a deep dive with us into California water politics and their impact on our food system.