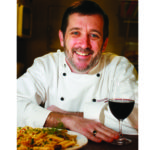 Chef Kurt Michael Friese is the founding leader of Slow Food Iowa, serves on the Slow Food USA National Board of Directors, and is editor-in-chief and co-owner of the local food magazine Edible Iowa River Valley. A graduate and former Chef-Instructor at the New England Culinary Institute, he has been Chef and owner, with his wife Kim McWane Friese, of the Iowa City restaurant Devotay for 13 years. Devotay is a community leader in sustainable cuisine and supporting local farmers and food artisans. Friese is a freelance food writer and photographer, with regular columns in six local, regional and national newspapers and magazines, and his book, A Cook’s Journey: Slow Food in the Heartland has just been published by Ice Cube Press.

CE: What issues have you been focused on?

KMF: Lately a lot more on bringing the ideas about good food to a wider audience. It’s not just about good food, but good food for everybody. I work a lot with Slow Food and it’s been saddled with an elitist bag; and rather than yelling “uh uh” it’s easier to demonstrate with good works that good, clean and fair food isn’t just for upper class white folks, it’s for everybody.

CE: What inspires you to do this work?

KMF: I love the way food affects people. I love the look in a kid’s eye when she’s standing in a garden biting into a tomato she grew herself. I love that some of the happiest moments of our lives are spent at a table with the people we love and the food we enjoy. I love that food is transformation. People who sit and break bread don’t often go to war against each other. Food is like six degrees of separation –- in less than 60 seconds I can relate almost anything back to food.

KMF: A world where everybody can enjoy real food. And by real food I mean there isn’t anything in the food that isn’t food; and if it wasn’t food a 100 years ago, its not food now. And, this does not mean fancy food or gourmet food, though it can mean that. It means really good, well-made food. Burgers and pizza are two of my favorite foods in the world, but you’ll never see me in a McDonalds or a Pizza Hut.

CE: Who’s in your community?

KMF: People that give a damn. They are passionate about their lives and the lives of people they love. And the only intolerance they have is intolerance for things that can bring those people harm; such as, poisons in our food and corporate ownership of food. The vast majority of calories on this planet are owned by five corporations; so if we are what we eat, and eat what we are, then corporations own us. We fought a revolution against this a while back, and here we are back to being barons and serfs in a fiefdom.

My community cares about the land, the food that comes from that land and the people who produce that food.

CE: What are your commitments?

KMF: To my family first and foremost. I’m at my core passionate about this stuff because of how it affects my family. I’m also concerned about the other people around me. So I’m committed to this idea of re-creating the food system. It’s going to happen either way. We’re going to get the hand-made food system, a regional system either way; it’s just whether we’ll do it the easy way or the hard way. The easy way is by no means easy, but the hard way is desperately, dust-bowl hard. Nature insists on bio-diversity, it can’t stand uniformity. Here in Iowa, if we plant corn on corn on corn, nature will demand bio-diversity. We’re starting to see the Round-Up resistant super weeds and the pesticide-resistant bugs aren’t far behind. So, that’s what I mean when I say ‘Dust Bowl hard’. We better do this our way, or nature will force us into it.

CE: What are your goals?

KMF: Both short and long-term. Short term, mostly legislative. I want to see some changes in the way our food system works in what some call the Farm Bill and I like to call the Food Bill; since some people think that if they don’t have a farm why should they care. But it affects everyone who eats. Changing the subsidies that create falsely cheap food or edible food-like substances. Impacting the Child Nutrition Act and food safety legislation. I’m a part of an arm of Slow Food that works very hard at lobbying and letter writing.

Longer range I want to accomplish a world where activists like myself are no longer necessary. I want to outlive my usefulness.

KMF: It looks a little bit like what I was just saying, that I outlive my own usefulness. Change to me has more people buying at farmers markets than grocery stores. It has people growing a lot of their own food. Not because they absolutely have to, but because they want to and they see the benefits in it. And, there’s an aspect to what I’m working for that these ideas are sometimes seen as lefty ideas; these are totally apolitical ideas. They run the gamut from right to left. These are ideas of tradition, ownership and family — they are just as applicable at a hippie commune as at a Tea Party rally. These issues are universal. So more people understanding that fact is what change looks like to me.

CE: Regarding the practicalities of enacting change, what planning is involved? What kind of outreach?

KMF: Oh any kind I can get my grubby little paws on. I think everybody should use the tools they have available. I happen to string together a noun and verb, so a lot of what I do happens in written form. It also happens with hands-on work, teaching classes, demos at farmers markets… things like that and in a sense evangelizing. I’m trying to spread the gospel of good food.

CE: What projects are affiliated with yours?

KMF: Slow Food above most of the rest because I’m on the board. IACP, Chefs Collaborative, more recently Slow Money which I think is a new and intriguing idea. Johnson County Local Food Alliance. Local Foods Connection …they’re a great organization. They sign up volunteer labor to work on local farms and they create a CSA that they give to folks in need. It’s a great model for what I’m talking about. Getting good food into the hands of people who need it, not just the elite.

CE: What projects have you got your eye on or are you impressed by?

KMF: Peoples Grocery in Oakland. They do amazing work.
Sustainable Seafood Watchat the Monterey Bay Aquarium.
The Southern Foodways Alliance
The American Livestock Breeds Conservancy
Seed Savers … which Gary Nabhan once described as the most bio-diverse place on the planet.

CE: Where do you see the state of agriculture/food policy in the next 5-10 years? Is real policy change a real possibility?

KMF: It is but its not going to be easy. I think the most important thing we can do to affect change on that level is to get urban legislators onto the ag committee in the Senate and the House. They don’t normally go for those positions because they don’t think it’s their constituency… but they affect all people who eat. When the Farm Bill was originally passed more than 50% of the people lived on farms, now that number is 2%. And, while the farmers are still a vital part of things, it makes no sense to me that these decisions are made by 2% of the population.

Another thing is to get the Federal School Lunch Program out of the USDA where it’s a dumping ground for big business surplus and moved to a joint project of the Department of Education and Health and Human Services and focused on the education and health and well-bring of children rather than corporations who are just fine and don’t need our help.

CE: What does the food movement need to do, be or have to be more effective?

KMF: To have more people. It’s growing by leaps and bounds. Slow Food doubled its membership in the last year. Slow Food USA now has more membership than Italy, where it began; but that’s not enough. We need more, about a million. When Obama was here for a caucus, he was in full agreement with our ideas, but he said he needs to see that there is a critical mass behind them. And, I think Slow Food is in a good position to bring them out of the woodwork.

As for do, we need to live by the courage of our convictions and live by what we speak. And none of us is perfect. None can live these ideals every second of the day, but every little bit helps.

I live in Johnson County Iowa, we have 50,000 households, if each household spent just $10 per week towards buying something locally, that would keep $25million in the Johnson County economy every year. Now translate that to the Bay Area economy, and think about that fundamental shift that little difference can have with the economy rather than sending all our money to China by way of Fayetteville.

There’s a certain joy to that. With food it’s one thing, but there’s a joy in seeing your dollar again. For example, I buy my meat at a local farm, the guy gets his hair cut at the barber, and that barber eats at my restaurant. That means so much more than a split second trade.

CE: What would you want to be your last meal on earth?

KMF: That’s a rough one. Bratwurst and German potato salad and sauerkraut and Bell’s Hopslam beer.