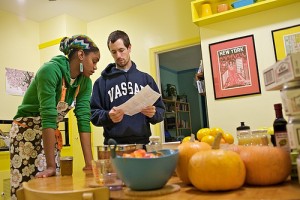 Shakirah Simley is a food justice activist with an unusual weapon: pectin. She’s the founder and creative force behind Slow Jams, a socially conscious artisanal jam company in Oakland, Calif. She also works full-time for the public health organization Prevention Institute, a not-for-profit dedicated to addressing health disparities and food and recreational inequities.

Born in the South Bronx, Simley grew up in Harlem the eldest of four kids, raised by a single mom who worked full-time while attending school. At the University of Pennsylvania, where the younger Simley studied cultural anthropology and urban studies, she led a successful effort to reform Penn’s curriculum to include a cross-cultural analysis requirement, as well as launched a unionization-and-fair-wage campaign with Jobs with Justice on behalf of security guards at Penn and Temple University.

While her career path has focused on social justice, her real passion is “food — specifically food justice,” she says.

Before moving West, Simley was one of the first Human Rights Fellows for the City of New York. She also volunteered as a community chef with Just Food in NYC, teaching families about eating and cooking in a local, sustainable, and culturally-appropriate way. She’ll soon be heading off to study for a year at Italy’s prestigious University of Gastronomic Sciences, founded by Slow Food International.

Q: What makes Slow Jams different from other tasty jam makers at the farmers market?

A. We’re committed to using urban and rurally sourced fruit, and our brand has a younger, progressive, and fresher feel to it. Plus we offer interesting but accessible flavor pairings such as Strawberry Lavender, Vanilla Grapefruit Jelly, and Onion Fennel Bacon Relish.

Q: How did Slow Jams come about?

A. I taught myself how to can, and through many hours of practice, voracious reading and research, my canning expertise has developed immensely with very successful results.

While some folks grew up canning, I did not. Growing up in low-income neighborhoods, we hardly had access to fresh, affordable, abundant (never mind local or organic) produce. Whenever my siblings and I did have fruit, it was mostly during summer months — my mom would specifically get fruit from street vendors located in wealthier neighborhoods and bring it uptown. Welch’s [jelly] was a requisite for our PB&Js.

When I moved to the Bay Area, I was amazed at the year-round produce availability, the varieties, and the strong connection to and support of sustainable, local food systems. My desire to make jams and preserves and start a socially conscious company like Slow Jams is heavily influenced by my experiences growing up with a lack of access. As I steadily scale up my business over the next year, I want to ensure that values such as “high-quality, local and organic” and “culturally appropriate and accessible” are not mutually exclusive.

A: I’m committed to sourcing a significant percentage of my ingredients and produce from urban growers. Over time, my company will work to build a sustainable network of urban producers including urban farms, community gardens, neighborhood fruit trees, urban backyards, and wild and foraged food. By creating positive economic activity through the vehicle of a local food/food-justice enterprise, I hope to stimulate the local economy through urban-ag and green-job development, utilize the untapped market of urban farmers and producers, provide opportunities for local non-profits with similar value systems that serve as potential producers, and create more viable urban micro-foodsheds.

I’m also receiving input from and holding focus groups in communities of color to determine the ways in which I can come up with products and services that would best serve those communities to widen the accessibility of Slow Jams. I’m also researching very small-scale local female farmers and farmers of color that could serve as direct suppliers; oftentimes these groups are excluded from mainstream distribution channels.

Basically, I want to make damn good, high-quality jams and preserves that are priced reasonably and distributed equitably. Slow Jams was recently accepted into La Cocina‘s Incubator Program in San Francisco, so I hope this vision will be brought to reality.

A: Social justice, yes. Food, not necessarily. It wasn’t until college that I started making the connections between food, access, and inequality with the help of one of my political science professors, Mary Summers.

After I graduated, moving back home to my old neighborhood in Harlem and seeing the food environment, I was struck at how hard it was for me and my family to eat healthily. I missed the farmers market at Clark Park in Philadelphia and having access to better grocery stores. Yes, having limited means doesn’t allow for the best food choices, but it’s no coincidence why certain calories are cheaper than others, why fruits and vegetables were too expensive and sub par and why finding whole grains, unprocessed or unpackaged food required a trip downtown.

My — and my mother’s, neighbors’, and family’s — pocketbooks were no match for the corporate control of our food system, and the institutionalized and systemic policies that keep this control in place. That’s why I’m starting a progressive food business and completing research that challenges this system and offers viable, inclusive and sustainable solutions.

Q: What was the biggest obstacle you’ve faced in this business?

A: Moving to California and starting from scratch. I didn’t have any job prospects, an apartment lined up, or a large social network when I moved to San Francisco. I was terrified. I feel incredibly fortunate to have come so far. Being a woman from my background presents certain challenges in a societal context and in starting a business, but I don’t view this as an obstacle per se, more like fuel for my future ambitions and creating social change.

Q: Who do you look to for inspiration?

A: I mainly look to the women in my family, to activists like [Growing Power founder and urban farmer] Will Allen, who are really making it happen. I also think working out of communities with more liquor stores than supermarkets is an inspiration in and of itself.

Q: What books do you keep by your bedside, literally or metaphorically?

A: Poetry by Sonia Sanchez, a journal, and if I could have all of Wendell Berry’s writings too, I would. Farm City: The Education of an Urban Farmer by Novella Carpenter and Diet for a Hot Planet by Anna Lappé are next up on my list.

Q: What keeps you up at night?

A: My business, literally. And, as my friends jokingly say with fists clenched, “Injustice!”

Q: What advice would you give someone who is thinking of a career in artisanal food?

A: Take the time to develop and craft your business acumen and savvy. The best folks in artisanal food are not just great at making jam or pastries, cheese, or wine; they’re hustlers in the best sense of the word. Be consistent about networking and building relationships with others. Also, always remember why you decided to go into artisanal food in the first place – that’s critical to staying grounded, focused, and encouraged.

A: On super hot and humid days, running down the street with my younger siblings to catch the Mister Softee ice cream truck for a vanilla ice cream cone with rainbow sprinkles. Following the jingle of the Coco Helado vendors to get a mango and coconut ice in those squeezable paper cups. Black Cherry Jell-O moulds and Cool Whip with my Grandma Becky in Queens.

Q: Do you have a food-related guilty pleasure?

A: My sweet tooth is my biggest weakness, for things of the ice cream and baked-good variety. I will trek across the Bay Area for a certain slice of pie, cupcake, ice cream flavor, or some ridiculous dessert. Support small, local businesses, right?

Q: Company drops by unexpectedly around dinnertime. What do you do?

Q: You recently won a Fulbright to study at the University of Gastronomic Sciences in Italy. What will you do there?

A: I did! And I’m super excited. My project is to analyze the Slow Food model in its home country. I want to determine the correlations between food, class hierarchy, and inclusion in Italy to see if it can present a model for achieving food equity across socioeconomic lines. Exploring class and race dynamics presents an opportunity to determine who has a seat at the Slow Food table, and thus who can help advocate for a more equitable food system.