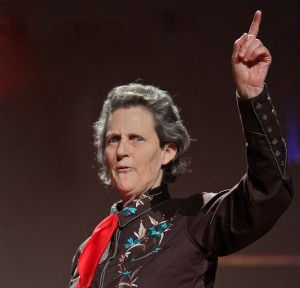 Dr. Temple Grandin has been a thought leader in both the animal agriculture and autism realms for decades. Grandin, the world’s most well-known autistic person, is a New York Times best-selling author, a professor of animal science, a consultant to the leading food companies, and a noted speaker on animal behavior and autism. She attributes her success in improving humane handling systems for livestock, systems that now impact around half the cattle in North America, to her different way of thinking. “As a person with autism, it is easy for me to understand how animals think because my thinking processes are like an animal’s,” she says.

Earlier this year, Grandin was named a “Hero” among TIME magazine’s 100 most influential people and was the subject of the HBO film Temple Grandin, starring Claire Danes. Food Safety News recently sat down with Dr. Grandin to discuss meat production and humane handling.

A: Everyone thinks high line speed is bad. Actually, high line speed plants work really well if they’re set up right. What’s bad is overloaded equipment that’s understaffed, that’s what’s bad. That can happen at a small plant, that can happen at a big plant. One of the worst plants I ever saw for understaffed and overloaded equipment, it went from 26 an hour to 35 an hour. They were slammin’ gates all over, they got their inspection suspended. This little plant worked fine at 26 an hour (and it was one of the niche markets it sold into)… You can have a big plant that might work like a dream at 300 an hour and then you push it to 330 and it’s horrible. If it’s set up right, high speed plants can work great.

Q: You’ve spent a lot of time out in the field, what portion of slaughterhouses are doing it right?

A: Ironically, most of the big plants that are audited by McDonald’s and places like that, I’m not going to say they’re perfect, but an atrocity like this last video with the pitchforks in the udder, you’re not going to see anything like that.     What I get concerned about is the little local places that are not being audited. I’ve been involved in working with and training auditors for big plants and small plants…for the big plants the audits started 10 years ago, in 1999. The little plants, there was a five year delay for them. The big plants were just horrible when we first started and then when we walked into some of these little plants they were just as horrid. The thing I have found about little plants, they’re either really good or really bad. There’s like no middle road. It’s so dependent on the attitude of the manager.

A: Not necessarily. The thing that’s important is whether people care. That is important. I’ve done a lot of work with the big companies, and I can’t be naming names, but I’ve done construction work for all of them. There were some that were like the BP of the meat industry–rushed, sloppy, cutting corners on methods, cutting corners on materials, and the way they treat animals was atrociously bad–and then you’ve got the companies that don’t do those things. It gets down to the top person caring. It’s the attitude. It’s gotta start with top management. It’s gotta start with the top person caring. I’ve watched some of these corporate eyes get opened.

I remember the day when one of the McDonald’s executives saw a half-dead cow go into his product. Man, he lost it. Like ‘whoa – there’s some things we’ve got to fix.’ You’ve got to get customers out of the office and get them seeing stuff. If people care it makes all the difference. It’s the big plants that started [paying attention to humane handling], let’s give them some credit where they need some credit. The big plants started the animal welfare conference, we’ve had that welfare conference for over 10 years. They’ve become more and more conscious of this. Cargill has been a real leader, they’ve put video auditing in all their pork and beef plants. They’ve been a total leader in that. It’s audited over the internet by third party auditors. Some of the other companies are starting to do it for food safety, for critical testing, and dressing procedures.

Q: As a consumer, how do you tell the difference between the good and the bad?

A: I’m at the point right now where I want to put it all on live video on the internet. I’m at the point where I want the industry to take all the mystery out of things. Some of the companies have video auditing and that’s good… but put a live feed out to the internet so anybody can look. What have we got to hide? The only things that I think are really proprietary are the customer lists and maybe the boxes where they pack product. We have got to take the mystery out of it…I’ve been going to cattlemen’s meetings and saying ‘let’s put tours of ranches up on YouTube.’ We need to be showing what we do. I’ve got pictures and video of cattle and pigs dying up on the internet now on YouTube.

Q: So much of what we do see are the really bad examples, the undercover whistleblower stuff…the veal in Vermont, the recent dairy incident…

A: That was horrible, horrible, just horrible. That guy [from Conklin dairy] also has felony charges on an illegal gun.

Q: Are these isolated incidents?

A: Most places are not doing stuff that horrible. To say that every dairy treats their animals that way, no, that’s wrong, they’re not. But on the other hand, the truth is usually somewhere in the middle, between the animal rights advocates that say everything is an atrocity, to the industry who says everything’s just fine. I’ve worked in a lot of places. It’s somewhere in the middle. It’s a constant battle. You can’t under staff and overwork. Tired people are more likely to get angry, and so are overworked people.

Q: What about high turnover?

A: Well, if you treat the people decently you want have such high turnover. I was horrified to find out about a dairy that was working its Mexican employees 12 hours a day and not giving them lunch breaks, that’s just terrible. I think we have to have more customers getting involved. I just read something about people jumping off the roof in some factory in China. Well, whosever electronics electronic doo-dads are getting made in that factory, those companies need to go into those factories and straighten this out. That’s unacceptable. Customers drive change.

Q: Knowing what you know, are there certain things that you avoid, do you understand the difficulties consumers face trying to make sense of all of this?

A: I’m very concerned about what I call biological system overload. We’re pushing chickens, turkeys, dairy cows, and other animals to where they’re falling apart. We’re seeing lameness and abnormal growth problems. Beef cattle still live outside so we haven’t messed them up.

Q: Do you think that affects us?

A: No, no I don’t think it affects us. A lot of people think chickens are fed hormones and they’re not. The chickens just grow really fast because they’ve been bred to grow really fast. It’s genetics. Same thing with turkeys.

Q: Do you have confidence in the way we raise, slaughter, and process meat?

A: When it’s done right, yeah. Things have to be done right. You’ve got to figure out critical control points are really important, and you’ve got to do it right.

Q: Do you take issue with the subtherapeutic use of antibiotics in animal feed?

A: The thing that’s not known, when it comes to antibiotics in feed, is that a lot of it comes out the backside of the animal. What does that do? It’s a massive, uncontrolled experiment. I’m not worried about eating the meat, that doesn’t worry me. The meat’s fine. With the antibiotics you’ve got science and nature…I’m reading a ton of red flags. I’m going to call them red flags at this point. Let’s look real sensible into the future… There’s things that big Ag can learn from organic. In the future, there will be a new large scale type of commercial agriculture. We’re still going to use chemicals, we’re still going to use antibiotics, but we’re going to use a whole lot less of them. We’re going to adopt some of these crop rotation practices, get rid of some of the monoculture and kind of make a new large-scale commercial that will be economical. But, as long as corn and oil are cheap, this no economic incentive to change. Somewhere in the middle I can see some kind of a hybrid thing forming. Right now, big Ag looks at Michael Pollan as being kind of evil. Well I say, ‘there’s a lot of things that Michael Pollan and you agree on, have you ever actually read the book?’