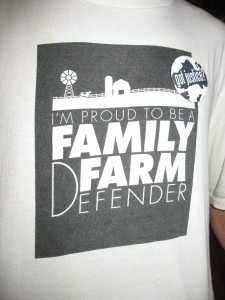 Appropriately, the evening began with a picnic featuring local cheese and ended with an ice cream social under a yellow moon. In between, dairy farmers, consumer advocates, professors, labor union representatives, faith communities, antihunger advocates, an aspiring cheesemaker, and even a Certified Public Accountant spoke out forcefully about the widespread injustices in the dairy industry.

The main event was a Dairy Town Hall Forum in Madison, Wisconsin, sponsored by Family Farm Defenders, National Family Farm Coalition, and Food and Water Watch, and timed to coincide with Friday’s Department of Justice and USDA workshop examining corporate concentration in the dairy industry. The workshop today is part of the ongoing investigation (which I reported on here) by the two departments to determine whether food and agriculture companies have become too concentrated.

The dairy industry is one of the most consolidated in the country, with just one company controlling 40% of the US milk supply. Prices for farmers have fallen so low in the past three years that many dairy farmers were losing as much as $200 per cow every month in 2009. Meanwhile, even though the price farmers were paid for milk fell by almost 50% from 2007 to 2009, the retail price dropped by less than 25%. Someone’s profiting, but it’s not farmers or consumers.

In these conditions, last night’s attendees do not need a year-long governmental investigation to learn if agribusiness is too powerful; that discrepancy between farmer price and consumer price affects their lives everyday. Dairy farmers shared stories of family and neighbors forced to sell their farms. One man wondered what his middle-aged sister and her kids will do now that she’s had to sell her farm, still has debt to pay, and has no off-farm skills. Her 12-year-old daughter hopes to go to college one day, but the woman isn’t sure how they will get through the next year. These stories have ripple effects, the man concluded, pointing out that his sister and her family “now have socioeconomic cost to everyone else.”

Charlotte Williams, of the Center for New Community, made critical connections between the struggles faced by rural farmers and low income urban residents, particularly those that live in so-called “food deserts” and would like to have access to high-quality dairy products. Corporate decisions (like where to open or close a supermarket) often help to create food desert conditions. “Anyway you look at it,” Williams said, “it’s a social justice issue when so little of the consumer’s dollar goes to the producer.”

Social justice and fairness were recurring themes of the evening — and are issues that the Justice Department has a real opportunity to address as a result of this investigation. At today’s official workshop, they will also be hearing many perspectives that don’t take justice into consideration; they need to continue to hear from all of us who do. You can still send a comment, sign the petition, and call your Congressional representatives to say that you support the DOJ/USDA agribusiness antitrust investigation and you hope that it will result in strong action.

Here are some voices from the Town Hall in Madison: