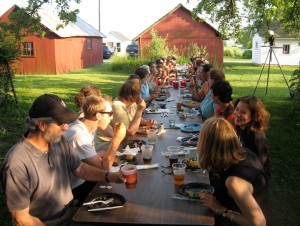 Michael Pollan’s highly influential book, The Omnivore’s Dilemma, has inspired many to change the way they think about their food. Robert DuBois is no exception. Like many others before him, he picked up the book and became more aware of the importance of eating well, shopping at farmer’s markets, and sharing a meal with others. For some food enthusiasts, the engagement might have stopped there, but not for DuBois, who with his friend and fellow food advocate Aaron Zueck, is right now cycling 4,000 miles across the country to advance the local food movement through community potlucks in an effort they’re calling Bikeloc. (Pronounced “bike-luck”: 1 part bike, 1 part local, 1 part potluck).

“We’ve both wanted to ride across the country out of our own love for cycling and we’re both really interested in local food so thought the marriage of the two would be appropriate,” explains DuBois, who was until recently Creative Director for GlobalGiving. The decision for him and Zueck, who just completed a fellowship with Americorps, to take the journey from Vermont to California on two wheels, he continues, was “all about enjoying the journey from place to place…it’s really the slow food mentality.”

DuBois and Zueck have been on the road for about a month and a half since their launch from Hardwick, Vermont (an epicenter of local food as reported in Ben Hewitt’s The Town That Food Saved ). Despite riding 80-90 miles a day, they say they no longer get tired. They are simply overwhelmed by the incredible hospitality they’ve been receiving along the way. “People have taken us in,” says DuBois. “Everyone offers a shower, food, good conversation, a place to sleep. It really reinforces the community aspect of our trip. Young or old people find value in learning from us, helping us.”

The Bikeloc potlucks—organized through a vibrant campaign on Twitter and Facebook earlier this year—typically bring in 25 to 40 people eager to talk about (and eat) local food. At each event, says DuBois, they come away feeling as if they helped bring about meetings that might not have happened otherwise. When the two bikers are not breaking bread with the locals, they are learning about bee keeping, permaculture, cultivation in concrete, and were even able to meet Growing Power’s Will Allen.

A visit to 15-acre Spence Farm, 40 miles south of Chicago, has been their most idyllic stop so far, DuBois reports:

“It’s the oldest farm in Livingston County and used to have corn and soy but over time Marty, Kris, and their son Will have converted it to fruit. It’s an amazing place. They sell directly to restaurant owners in Chicago, Champaign and Bloomington. They’re able to run a farm that totally sustains them. They have a 501c3 to do a lot of educational programs. They bring people in to talk about farming practices, equipment—they’ve created something. We felt the local food movement happening there because it’s really surrounded by corn.”

The struggle to diversify crops and methods in the center of monoculture has become ever more clear during Bikeloc’s journey. “I’ve read a lot of facts and figures about agricultural production,” explains DuBois, “but riding through 600 or 700 miles of ‘corn and [soy] beans’ has given me a visual idea of what those numbers actually look like. It wasn’t a good feeling. I try to remain positive in general but seeing all of this was a little disheartening.”

“We have all this land we could be farming fresh food on,” he continues. “We’ve met farmers who actually call themselves ‘food farmers’ vs. others who they call ‘land managers.’ Riding through a sea of corn, I’m in disbelief that all the corn is going toward energy production. We have amazing land to be growing on and it’s all one or two crops.”

But there has been a positive side to that exposure: DuBois and Zueck have witnessed firsthand the struggles many farmers face today, and have been given the opportunity to hear alternate points of view. Caught in a terrible lightning storm while riding through Illinois, they were taken in by a corn farmer eager to talk about the stark realities of production that DuBois and Zueck had been sensitive about bringing up during their trip. As DuBois recounts, “He felt trapped in the system, told us that it’s all about how much you can produce per acre, really sort of an arms race, with farmers now always wondering ‘what’s the next best chemical or spray?’ He said he felt the system wasn’t working, that we shouldn’t be eating all this processed food but until something really bad happened, like children being born with birth defects, we won’t see a change in agriculture. We were very interested to hear that from a farmer himself.”

DuBois and Zueck will end up in San Francisco later this summer. From there, it’s unlikely they’ll be returning to desks in DC any time soon. “We’ve found incredible liberation on the bike, in being outside all day,” DuBois explains. “It’s given us a unique perspective on the US, riding through at 20 miles an hour. This trip has certainly shifted the way I envision a future for myself.”