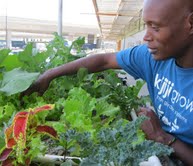 Eric Maundu is, self-admittedly, an unlikely gardener. Growing up in Kenya, he became disillusioned with agriculture, seeing farmers struggle with lack of arable land, water, and resources. “The last thing I wanted to do was farm,” he says.

Everything changed when Maundu learned about hydroponics, a system for growing plants that uses nutrient-rich water in place of soil and fertilizers. By that point, he had studied industrial robotics and had moved to the US to work as an engineer.

“All my life people had told me you need soil to grow plants. People kill one another for soil,” says Maundu.  Farming with water offered new possibility.

Today, Maundu is the co-founder of Kijiji Grows, an Oakland-based company that designs and sells custom aquaponics systems for growing food. With his business partner, local artist and Guerilla Café co-founder Keba Konte, he also educates people about aquaponics and brings new possibilities for sustainable farming to Bay Area schools, homes, and businesses.

In a typical aquaponics system, water cycles through a fish tank into a gravel-filled planter. Natural bacteria break down the fish waste, converting ammonia, which is toxic to fish, into nitrates that feed the plants. The fish water irrigates and fertilizes the plant, the plants purify the water, and the water is then recycled back into the fish tank, creating a closed-loop system.

The fish in the tank can be decorative or edible (tilapia, catfish, largemouth bass, goldfish and other herbivores and omnivores), potentially adding another level of food productivity to the garden. Aquaponics systems are easy to maintain, requiring only small amounts of water to replenish the evaporation loss. (Aquaponics uses up to 90 percent less water than soil-based methods of farming.)

Outside the Kijiji Grows office in West Oakland, Maundu grows herbs and leafy greens in a demonstration garden irrigated by a small goldfish tank. Though the plants are untouched by soil-borne disease, they are not immune to air-borne pests such as aphids. Maundu is unfazed by aphids, though. When he finds a kale leaf on which aphids are starting to breed, he picks it and drops it in the fish tank for the goldfish to eat.

Maundu has spent the last decade experimenting with aquaponics. His goal is to build affordable systems using locally sourced and recycled materials, or whatever people have on hand. “I’ll go out of my way to use something that is made or found locally, rather than use something that’s sustainable but must be transported from far away,” he says.

From the Country to the City

A few years ago, Maundu returned to Kenya for six months, intent on applying what he had learned. He saw villages devastated by AIDS, where grandparents had to care for the children, carry water, grow food, and cook. First-world farming methods, which require modern technology and machinery, simply didn’t make sense.

He helped install alternative farms, using hydroponics, aquaponics and other methods to suit the situation, in places that sometimes had no electricity and little water. He taught people low-tech farming and self-sufficiency skills, such as worm composting. As their food production improved, so did their diets.

When Maundu returned to the United States, he began to see connections between the arid savannas of Kenya and asphalt deserts of West Oakland, where soil is scarce and residents face food insecurity, malnutrition, poverty, and economic underdevelopment. His eyes were also opened to opportunities he hadn’t seen before, such as vacant lots, public spaces, and community resources.

He found that aquaponics, when combined with computers, can be used to engage youth in food issues. Computers are used to monitor water temperature and quality remotely and to send alerts when something is amiss. Drawing on his engineering background, Maundu employs electronics, math, programming, and 3D design tools in his youth classes.

Maundu sees the Mosswood project as a model worth expanding on. The next phase will be developing the areas around the Kijiji Grows warehouse into gardens to demonstrate that food can be grown anywhere, using local materials, minimal water, and no soil. Maundu also plans to create an aquaponics-based entrepreneurship program, which will train youth and adults in professional and technical skills such as business planning.

Aquaponics provides the medium, but the mission is to give people tools for self-sufficiency and channel the power of community. “I’m trying to go beyond the ‘green’ trend,” Maundu said. “It’s about creating connection.”

Originally published in the CUESA’s newsletter