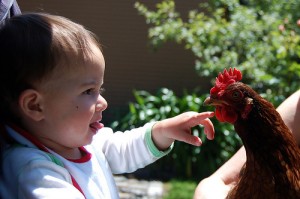 Our North Berkeley neighborhood is a haven for chicken fanciers. I’ve counted at least six coops within a three-block radius of our house! And we’re fortunate enough to live right next to one of them. Our lovely back neighbors, Fran and Chip, have three young hens in their backyard. In addition to entertaining Will, who now says “buck, buck” and heads for the back door whenever we say “chicken”, we also receive delicious eggs with brilliant orange yolks from the girls next door.After seeing how much Will enjoys watching the girls scratch, peck and flap their wings, I started thinking about maybe getting some chickens of our own. But how to begin? Fran was kind enough to answer some questions about her experience raising the birds. I’ve included our little “poultry talk” below in case you’re thinking about starting your own little backyard flock.

Q: How long have you been raising chickens?

A: We got our first chicken about 20 years ago. The daughter of our neighbors across the street had received a chick for Easter. Once the chick became a chicken, they realized that this was not what they’d signed up for, so we took it. We’ve had at least one chicken and, sometimes as many as four, though I prefer to have just two or three at a time, ever since.

Q: What kind of birds are these?

A: These three are Rhode Island Reds, they’re known for being reliable layers. We got them in early January and they just started laying their first eggs a month or so ago. I’ve also had success with Araucanas (they lay beautifully colored eggs) and have had a lot of different breeds, including the fancy ones with the fluffy feet.

Q: How many eggs do they lay?

Q: Where did you get them from?

A: I got these from Lucky Dog pet shop on San Pablo Avenue. I used to get them from Mike’s Feed & Pets in Hayward until Lucky Dog changed hands and the new owner started selling chickens about 5 or 6 years ago.

Q: What do you feed them? Is there special feed that makes for better eggs?

A: Yes, there is. They eat a mix of things:  I give them two commercial products – chicken scratch which is a mix of whole grains, and laying mash which is a more protein-rich feed that helps them produce good eggs. I also give them lots of vegetable scraps from our house and our neighbors’ and I will also stop by Monterey Market when they’re getting rid of greens that are too wilted to sell. The chickens love whole grains, especially, although they’re not interested in bread.

But their favorite things to eat are worms. I spoil them sometimes by digging in the compost bins to turn up the worms for them. They get right in there — they’re so enthusiastic that they are literally under the shovel so I have to be very careful. They come running when they see me pick up the shovel — they’ve developed a Pavlovian response to the shovel; to them, it means worms.

Q: Do they also need a source of calcium?

A: Yes, I give them ground oyster shells and we also crush up the shells of any eggs we eat for them – that is the best source for them – their own eggs! Funny, isn’t it? The commercial feed usually contains oyster shells or other sources of calcium for them. 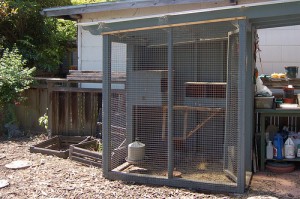 Q: Can you tell me a little bit about your coop design?

A: Oh sure, there is a square footage requirement – a coop should be at least 4 square feet for each chicken to make sure they won’t be stressed by being too on top of each other. The funny thing about this batch is that they all huddle together in one small box every night – three of them trying to fit in there is pretty tight but that is what they like. And then they use the other small box to lay in – they take turns. They never poop in the same place as they lay – very smart!  But none of them use the big box at all. The other important factor for a coop is to make sure it is secure. We’ve had chickens just decimated by possums. Now the floor of our coop is made of brick lined underneath with wire since possums and raccoons can and do burrow under the ground to get in – they’re very determined. And you must remember to lock the door once they’re all in at night, of course.

We also have a light in the coop that we use during the winter months to extend the daylight hours for them a bit since they lay fewer eggs when there is less daylight. 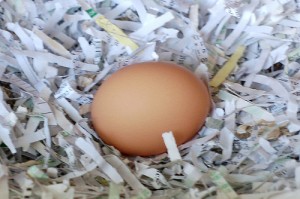 Q: It looks like you use shredded paper to line the boxes?

A: Yes, though I will also use hay when I have access to it. The only downside to hay is that they tend to eat it so you need to replace it more often – they don’t eat the paper.

Q: How often do you have to clean out the coop?

A: I clean it out about once a month. I could do it more often, of course. I put their droppings right into the compost – it makes great fertilizer.

Q: How much time do they spend out of the coop?

A: They are out twice a day for a while, which gives them time to scratch and peck and find bugs and eat greens and other yummy things from the compost bins. I let them out for about an hour in the morning before I leave for work, and then again when I get home.

Q: What sort of hours do they keep?

A: They are right in sync with daylight, they wake when it’s light and they go to sleep when it gets dark.

Q: After they’ve laid an egg, do they sit on it or do they get up and go about their business?

A: These hens don’t sit, I don’t think. When I come to collect the eggs in the early evening, they’re never sitting on them and the eggs are also cold by that time which makes me think they’re not sitting on them. 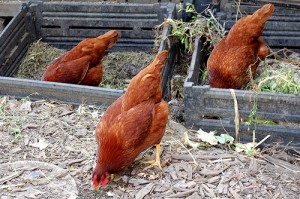 Q: What are their relationships like with each other?

A: They’ve got a clear social hierarchy. Although I’ve tried, I’ve found that it’s basically impossible to introduce new birds to a flock because their pecking order has already been established. The new birds just get pecked mercilessly. But this batch is fairly harmonious – they don’t have a scapegoat. They follow the leader, who is the smartest one of the three.  She’s also the most assertive. One of them is clearly dumb – she’s named Moe, the other two are named Meeny and Miny. I had two birds before these who were named Pooh and Lay (“Poulet”) because that is all they do.

Q: How long will they lay for?

A: Once they’re mature they’ll lay all year round, though they lay less in the winter – it’s all tied to the number of daylight hours. They need roughly 8 or more hours of daylight to lay – that is why we have the light in their coop. They will lay eggs for 2-3 years.

Q: What do you do with them once their laying days are over?

A: I’m not interested in killing them so I give them away either to people who will keep them as pets or who want to use them for the soup pot. Every once in a while if I have a particularly ornery bunch, I’ll take them up to Tilden park and release them – I figure they’ll either survive or make a great meal for a coyote.

I used to feel guilty about this but I have gotten over it. I figure they have a very nice life while they’re with me – they’re happy and well-fed and cared for, which is more than you can say of what they’d experience in a commercial environment or in the wild. And then they either become pets or come to a quick end.

Q: Do you have any advice for people interested in starting their own flock of chickens?

A: I’d caution people to be aware that chickens are destructive to yards – they’re designed to scratch and turn up earth and eat greens so you have to fence them out of anything you want to keep safe – your garden, your lawn, etc.

And it’s something you should only do if you really want chickens, of course! But I love it. I find them interesting and entertaining to watch. They’re also a great conversation starter. I get wonderful fertilizer for my garden. And, of course, delicious fresh eggs all year round. Store-bought eggs really don’t taste that good, in comparison. You should do a blind taste-test – it’s impressive.