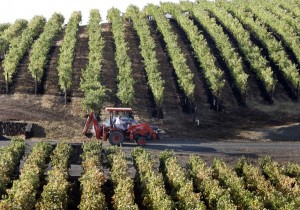 This is the second year that the European Grapevine moth has been found in California, putting grapes, the top crop in the state—with $3.9 billion in annual gross production revenue—at risk in six counties. Napa County, where the $462 million grape crop commands the highest prices in the nation, has by far the greatest infestation. Now thousands of acres from Mendocino to Monterey have been quarantined and the federal government has announced $1 million in contingency funds to help nip this moth in the bud.
Native to the Mediterranean, the European Grapevine moth (Lobesia botrana) has been found in southern Russia, Japan, the Middle East, Chile, and northern and western Africa. How the moth arrived here is still a mystery; some experts theorize that it could have been brought in from illegal cuttings from Europe, although others think that it has been in the state for several years and we’re just now seeing an infestation. Considered a poor flyer, the moth might be hitchhiking its way around the state on trucks and farm equipment, further spreading its reach. Federal and state researchers are racing to find eradication options for the moth, whose larvae feed on grape flowers and developing fruit. Later generations eat mature grapes, predisposing the crop to fungal infections.

The California Department of Food & Agriculture (CDFA) and the U.S. Department of Agriculture (USDA) are working on an intensive statewide trapping effort to determine whether the moth has infested other areas of the state. According to CDFA Secretary A.G. Kawamura, more than 40,000 traps have been set statewide. In Napa County alone, some 50,000 moths have already been trapped. CDFA inspectors are also working with growers, nurseries, landscapers and others who handle plants and fruit to guard against further spread by regulating the harvest, shipping, and handling of affected crops and plants. In addition, the International Technical Working Group for the European Grapevine moth recently issued its recommendations for eradication.

Growers are already treating crops with what U.C. Extension experts characterize as low toxicity pesticides. CDFA has also approved two organic materials and CCOF, which provides organic certification to growers, has approved ISO-Mate EGVM, a pheromone treatment used to confuse adult male moths in search of a mate. Dr. Monica L. Cooper, the Viticulture Farm Advisor at U.C. Extension in Napa County, said that it’s unclear how well one treatment will work compared to another, though several ongoing trials will provide these data down the road.

With an estimated retail value last year of $17.9 billion, the California wine trade has reason to be concerned. “We are working with the State and federal governments and industry leaders from around the world on a plan for ensuring that this destructive pest does not get a long term foothold in Napa County or any other part of California,” said Elizabeth Emmett at the Napa County Agricultural Commissioner’s office. “At this moment, the financial impacts are related to the treatment, of course. Assuming the treatments do their job and we are able to substantially decrease or eradicate the moth, that would greatly decrease any potential crop losses.”

Jon Ruel, Vice President of the Napa Valley Grapegrowers and Director of Vineyards and Winemaking at Trefethen, doesn’t see the moth as a direct threat to wine sales, but more as a threat to the production of wine grapes. “It’s possible that higher farming costs could translate to higher bottle prices, but with so many other factors at play, including the current economic climate, I don’t see wineries raising their prices any time soon.” Ruel noted that Napa growers are still very concerned about the moth because, if left unchecked, it could impact both the quality and quantity of the grapes produced. He’s hopeful controls can be obtained without sacrificing commitment to sustainability.

Organic and Biodynamic growers are worried about the long term sustainability of their practices in the face of forced spraying to combat the spread of, or damage from, the moth. According to Josh Metz, general manager at Magnanimus Wines, moth movements from one infested location to another are facilitated by the continuous habitat which is a common feature of conventional mono-cultural farms. Metz noted that Biodynamic farms–which promote biodiversity by planting habitat breaks and multiple productive crop types–while not eliminating the risk of moth infestation, contribute to a lowered probability of infestation.

Glenn McGourty, a Mendocino viticulture and plant science advisor, said that the Agriculture Commissioner there is very sensitive to the needs of organic and Biodynamic winegrowers and will do whatever he can to insure that these growers won’t have their certification status compromised by being required to allow unauthorized insecticides applied to their crops. Metz noted that while the grapevine moth infestation presents immediate challenges to the winegrowing community, it also highlights potential limitations of certification programs designed with limited flexibility to address modern challenges, and suggests the need for continued review and revision of these programs as the nature of the agricultural landscape continues to evolve.

In addition to increased spraying of conventional pesticides, which also impacts farm workers, to date, eradication plans for the moth have been much less vast than the aerial spraying of artificial pheromones for mating disruption conducted near Monterey and Santa Cruz for the light brown apple moth, which CDFA has treated as a potentially serious threat to agriculture, and which it has shown up mostly in urban and suburban areas.

Dr. Steve Scholl-Buckwald, managing director of Pesticide Action Network, thinks that the state and growers are doing a good job by not overreacting to the moth, but that officials aren’t investing nearly enough in agricultural inspection, and stations are woefully understaffed. “So far the state isn’t reaching for the most hazardous quick-fix pesticides,” said Scholl-Buckwald. “That’s wise, because they are no solution, they lead to pest resistance and resurgence, they put farmers and workers at risk, and will cost more in long-term health impacts than the crop damage they prevent in the short term.” Scholl-Buckwald thinks that it’s even more critical to develop a robust and effective ecological pest management program—both one focused on this specific pest and increased investment in research and intensified focus on helping growers build ongoing capacity to apply the best modern agro-ecological approaches to known and new pests. As the state continues its efforts to contain this problem, you can also help out if you grow grapes in your own yard. Look for worms on bunches of grapes, webbing or anything unusual with the grape flowers. The Technical Working Group recommends that all grapes moved from infested areas also be covered, either with a tarp or screening. In addition, your own plants might come under the quarantine, especially if you grow “host plants”—including olives, stone fruit trees (peaches, plums), as well as persimmons and pomegranates. In the meantime, experts are advising harvest and consumption of fruit on-site to further limit the risk of spreading the moth.

For further background reading on the European moth in Wine Country, check out the Chronicle’s story from March.