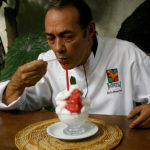 “Observe,” Chef Beto Pimentel said as he held the cacau fruit up for a moment of quiet admiration before slamming it against a cement wall. A popping noise brought a thin crack through the shell, we coaxed it open, and there it was, the science of cacau.

This was no ordinary cacau. Carved out in the heart of Salvador, Brazil’s third largest city and the capital of the state of Bahia, lives a refuge of native species. Some are rare and almost forgotten, others are more normally seen on large plantations. The guardian of this tropical orchard is Beto Pimentel, and guard he does – with zeal and dedication.

Achaichairu, biri biri, umbu, licuri. These are merely a few of Beto’s prized native fruits… the list goes on – and on. Agronomist-turned-restaurant-visionary, Beto has researched and collected native species for over two decades, procuring them through his travels, or chancing upon them in his wanderings. His work in labs and his own orchards has given rise to the restoration of many a fading fruit. These days, Beto shares his passion for reviving these waning species by donating fruit trees, gifting rare seeds, and transmitting his contagious and purely sincere dedication to anyone he meets.

I spoke with Beto at his restaurant, Paraíso Tropical (Tropical Paradise) a well-hidden enclave complete with the 60-hectare orchard and the 6,000 – yes six thousand – native fruit trees it harbors. These fruits, along with the cassava, hot peppers, and herbs grown on the orchard, build the dishes for which the unique restaurant is famous. Drawing from the on-site orchard in Salvador as well as his second farm near Foz de Iguaçu (on the border of Argentina and Brazil), Beto and his team create new flavors and fresh awareness about the Brazilian food supply and traditions.

As we sat, Beto ordered a steady stream of creative dishes for us, barely finishing one thought before he remembered a better, more exciting fruit to share with me. Weaving through multiple conversations simultaneously, Beto gave the impression of having too many fruits and ideas to share and not enough time to do so. I had hardly begun to understand my salad of dime-sized coconuts and jambo flower when Beto grabbed me by the arm and pulled me through his orchard.

At what seemed the speed of light, we toured (or jogged may be more accurate) through the orchard, whose soil Beto restored and built up from scratch. We had just passed some lost-looking chickens (Beto grumbled to himself about broken fences) when the chef began our rapid-fire fruit tasting. There was starfruit, four varieties of mango, cupuaçu, umbu-caja, and countless others whose names now escape me.

Yet while the lush restaurant and its lively owner certainly charm patrons, Beto has a wider vision for the work. Active in Slow Food Brasil and a participant of the food sustainability network Terra Madre, Beto is working to bring sustainable growing and food diversity to a population that, according to him, only wants to know about bananas and apples. “If we don’t value our own foods, who will?” he asked.

The movement for ecologically-responsible and traditional foods within Brazil could not hope for a better advocate than Beto Pimentel. “Slow Food,” he stated with conviction, “if taken seriously, could save the world.” And he certainly takes it seriously; his restaurant is widely reviewed in Salvador and most recently he and his fruits won serious airtime on Mais Você, one of the most followed television shows in Brazil.

But the chef-activist-farmer is no idealist. In a state plagued with drought throughout its agricultural lands, a farmer livelihood is barely eeked out in between rains. In the dry sertão of the state’s interior, according to Beto, leadership is lacking, as is the momentum to change and experiment. While Slow Food Brasil hosts events celebrating northeast crops such as umbu and heritage rice varieties, the market for these foods and for the organic label remains narrow.

In this market, between the agricultural sertão and the unmistakably urban Salvador, the notion of organic is only beginning to reappear. Beto’s restaurant serves as a test lab, playground, classroom, showcase… an invitation to the possibilities and varieties of Brazilian flora. Beto continues on his quest to spread the word one conversation, tangent, and fruit tree at a time – but as I closed out our interview and headed to the bus he confessed, “I’m just trying to have clean conscience by the time I go.”