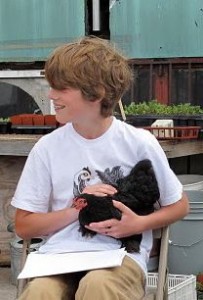 On a recent Sunday afternoon in Greenpoint, Brooklyn, over a hundred people gathered at the 6000-square foot Eagle Street Rooftop Farm to talk about the farm’s newest addition: six laying hens.

“I pretty much planned the event so that Orren would come down and see the farm,” Novak said. This comes as no surprise since she runs an organization called Growing Chefs, which educates youth about food on the farm and in the kitchen.

That Sunday, he held one of Novak’s hens, which he used to discuss chicken anatomy. He pointed out the crop, where food goes to be digested with the aid of swallowed rocks, the comb (he suggested using Vaseline in winter to keep it from freezing) and tail, where the hen produces wax that she uses to clean her feathers. “If your hen looks like she doesn’t have a head, she is probably just cleaning herself,” he said to laughter.

His love of chickens started early. At age nine he was a volunteer cleaning chicken coops at a local farm, learning all he could about the birds. Then he adopted his own flock. After choosing chickens as the subject of a school research project, “I found out how horribly most hens in this country are raised,” he said. “I know chickens are smart, they have personalities, and opinions. I am not ok with what I consider mistreatment of these cool birds for cheap meat and eggs.”

Fox is one of a growing number of young people taking on big projects with the aim of changing the food system. Author Michael Pollan last year released a young reader’s edition of his bestselling book, The Omnivore’s Dilemma, to reach this growing audience.

“Food is a uniquely empowering issue, it’s something you can change without waiting for government to act, since you’ve got those three votes every day, and this particularly appeals to young people,” Pollan said. “I also wanted to reach them before they went out on their own and took control of their food choices.”

New York City thirteen-year-olds Sadie Hope-Gund and Safiyah Riddle made the movie “What’s On Your Plate?” with filmmaker (and Sadie’s mom) Catherine Gund to explore how food gets from farm to plate. What inspired this jaunt through the farm fields of upstate New York, New York City school cafeterias and the Borough President’s office in Manhattan? A tomato.

Tasting that fresh tomato from a farmer’s market, said Hope-Gund, “made me realize that there was better stuff out there than what most people were getting, which didn’t make sense. If there was something better, everyone should get it.”

“We’re in the awkward position because we don’t have as much power as adults but we’re eating just as much as adults,” said Riddle. “I think we need to be more aware of where we stand in the food chain.”

The movie had a professional crew, but was largely directed by Ms. Hope-Gund and Ms. Riddle’s questions, for which they sought out experts to answer on film. In one scene, the girls are speaking to Jorge Collazo, executive chef of school food in New York City. Ms. Riddle starts by asking, “What was school food like when you were growing up?” a question that could only come from a young person, softening a hard conversation about changing school food.

The film also features the Angel’s, a Latino family renting land in Goshen, NY and selling their pesticide-free produce at the Greenmarket in Manhattan. After the film came out last February, Hope-Gund and Riddle helped the Angel family start a Community Supported Agriculture program, in which twenty-eight families paid in advance for a weekly box of produce from the farm. This year, the Angel’s will have three CSAs across the city, and have saved enough money for the down payment on ten acres of land. Their oldest daughter, Lizbeth, is now planning to study agriculture at college.

The internet has empowered this generation of young people with a platform and endless data: they maintain blogs, tweet, and consult Google for information on things like starting non-profits. Thirteen-year-old Koa Halpern, from Denver, Colorado, decided to start Fast Food Free, a non-profit with the goal of reducing the consumption of fast food, after researching the environmental and health impacts of the McDonald’s food chain.

That message might be coming from miles away, conducted over Twitter, which has become a new form of mentorship. In fact, it was through Twitter that I met Orren Fox, and that Fox came to know a circle of farmers, beekeepers and chicken owners in Brooklyn, and to be a panelist at the farm.

Like most of the other young people I spoke with, for Fox, taste was the bottom line. This past year, he started a Farm Club, which was the most popular extra-curricular activity at his school. “We all plant seeds, grow veggies and I take my birds to school so that kids understand what they are eating,” he said. “I always tell kids that good food just tastes better, forget that it is better for you.”