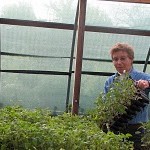 Temra Costa is a sustainable food and farming advocate and author of Farmer Jane: Women Changing the Way We Eat. Civil Eats will feature her profiles of some of America’s women farmers and food advocates over the coming weeks.

On the banks of the Sacramento River, farm crops are the beneficiaries of centuries of natural flooding that have added rich sediment to the soil’s fabric. The longest river within California, the Sacramento, stretches from Mount Shasta all the way down to the Delta, where it joins with the San Joaquin before splurging out into the Suisun Bay just north of the San Francisco. The story of the Sacramento is as rich as its soil as Native Americans traversed its banks long before Interstate 5 was put in.

These days the river doesn’t flood naturally but has 180 miles of levees that allow ships to travel all the way to Sacramento, giving farmers like Suzanne a bit more security in her business. I had the pleasure of catching up with Suzanne to check out all that she has growing on – from seed bank to full-on entertaining facilities – that inspire people and chefs across the country.

Suzanne moves quickly around the house that’s been in her family for generations – like a hummingbird, she is constantly in motion. The kitchen has been updated in the past few years and is in every sense of the word, gourmet. Full of stainless steel and warmed up by Mexican tiles, she leans over to a special temperature mini-fridge and questions whether I’d like some of her homemade goat cheese, wine, or local artisanal chocolates? Suzanne happens to be a stalwart of the Sacramento food scene and has partnered with a local distributor and former chef, Jim Mills of Produce Express, to get her food into restaurants. Together they host restaurateurs on the farm to educate them about underutilized varieties of heirloom vegetables that usually don’t make it on menus – namely because they haven’t heard of them yet.

In addition to all that she grows, and markets to restaurants or through her CSA, she’s one of the few farmers I know of that grow and sell seed. Hyper-intelligent, Suzanne is an authority on the matter as she wrote the definitive book on seed saving. Seed to Seed: Seed Saving and Growing Techniques for Vegetable Gardeners (2nd edition, March 1, 2002), tells us exactly what seed companies don’t want us to know. From soaking and drying, to smoke treating and bruising, every seed has a story and a way to harvest and preserve. As a previous “seed curator” for Seed Savers Exchange, Suzanne generously gifted the rights of the book to the organization. Its coverage of 160 varieties has undoubtedly aided their members in exchanging “an estimated one million seed samples, from gardener to gardener, since the organization’s inception in 1975.”

Suzanne’s seed library — bursting with bean, mustard, squash, tomato, and every other imaginable legume, brassica, composite, cucurbita and solanum — is a loud reminder that what we plant now in spring/early summer could sow seed by fall if we let the plants get that far. Seed to save and seed to share. And while she’s buzzing around showing me her quail that she keeps for eggs, and introduces me to her goats, the farm at midday is soaked in light and moisture from the river nearby. A train horn sounds its way along the river, and Suzanne has got it all figured out – she’s successful and loves what she does. While I don’t figure out the secret of her energy while I’m there, it gives me a reason to visit again, for some seeds and some inspiration from Del Rio Botanical.