Review Of Wendell Berry’s New Collection Of Essays, What Matters? Economics for a Renewed Commonwealth 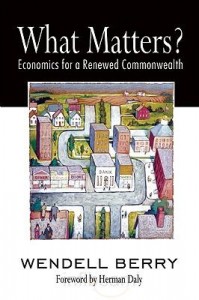 In much the same way that Michael Pollan has told us in recent years not to trust our nutrition to the nutritionists, essayist, sage, and father of modern agrarian thought, Wendell Berry, instructs us that we should never have trusted our economy to economists. At least not to the ones who have been (mis)handling it for the last hundred years or so.

In his collection of new and renewed essays, What Matters? Economics for a Renewed Commonwealth, Berry lays out clearly and concisely the hows and whys of our modern system’s failures, but far from being all doom and gloom, he points the way to a properly prioritized economy. It may at times feel a bit Utopian, but it is perfectly plausible, sustainable, logical and, in the end, necessary.

Right from the start (in fact in the second sentence) he explains that “In ordering the economy of a household or a community or a nation, I would put nature first, the economies of land use second, the manufacturing economy third, and the consumer economy fourth.”

In this list of priorities it is easy to see – and no accident – that the economy that has failed us so miserably at least twice in the last century is ordered in precisely the reverse. It has relegated its citizens to the status of mere consumers, duping them into confusing wants for needs, and “the gullibility of the public thus becomes an economic resource.” It’s a meager stumble then from Plutocracy to Idiocracy.

Berry is a farmer who sees the world from a literal ground level. In one of the essays, “Faustian Economics,” he contends, “The real names of global warming are ‘waste’ and ‘greed.’” He has no tolerance for the conspicuous consumer, accusing him of not only “Prodigal extravagance” but also of having “an assumed godly limitlessness.” These are accusations that would not sting so much if they weren’t true.

The irony bears noting, by the way, that in our energy deal with the devil – only the most recent downside of which is the horrendous catastrophe now killing the Gulf of Mexico – the dirty, pollution-prone fuels come from the depths, while the sustainable, clean fuels come from the heavens. Yet we insist upon more of everything now, guaranteeing a whirlwind harvest, a condemned future. A Faustian bargain indeed.

Also noted here, parenthetically, is a thought on biofuels, or what fellow deep thinker Raj Patel calls “the preposterous notion that we should grow food in order to set it on fire.” Berry says, “Perhaps by devoting more and more of our already abused cropland to fuel production, we will at last cure ourselves of obesity and become fashionably skeletal, hungry but – Thank God! – still driving.”

The essays in What Matters? are at once lyrical and concise. The author’s meaning is so unimpeachable and his logic so solid that I defy an economist of any stripe (in the unlikely event that they would read the book) to refute his contentions.

The sort of economy Berry envisions, indeed the sort of local food economy that so many of us are working toward, will undoubtedly come to pass. It will come the easy way or the hard way, but it will surely come. Make no mistake, the easy way is by no means easy – things worth doing rarely are – but the hard way is desperately, dustbowl hard. We fail to heed Mr. Berry’s warnings at our children’s peril.