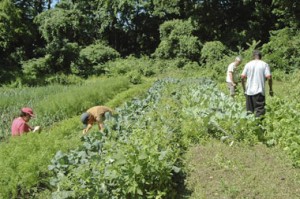 Tom Philpott makes a crucial point in his must-read post on the potential and perils of urban ag. You can’t criticize urban farms for their reliance on grants and donations without acknowledging that virtually all forms of agriculture require heavy subsidies in some form or another:

…[A]ll farms struggle mightily to “thrive in a market economy” — and relatively few actually do. The most obvious evidence to back up this point is commodity subsidies. If any farm type should be able to thrive in the free market, it would be the large corn and soy farms of the Midwest. They stand on one of the world’s greatest stores of topsoil; they are highly capitalized, with towering combines tricked out with GPS and other technology that allow a single farmer to cover thousands of acres. They have have access to high-tech seeds and bottomless amounts of fertilizer and pesticides. Agribusiness giants like ADM and Cargill have built up an elaborate infrastructure to buy their goods and ship them around the globe.

Yet over most of the past 20 years, corn and soy prices have hovered under the cost of production, making these farms reliant on billions of dollars in annual subsidies to stay solvent. They’ve turned marginally profitable over the past few years — not due to the magic of the free market, however, but because a government-mandated and -subsidized ethanol program has lifted corn and soy prices. Like urban farms, “economic sustainability eludes them.” They are wards not of the foundations, but rather of the state.

Philpott then observes that, according to USDA data, most farms run as businesses (rather than hobbies) contribute only a small fraction of farmers total income. What the government doesn’t subsidize, “off-farm income of farmers and their spouses” does: 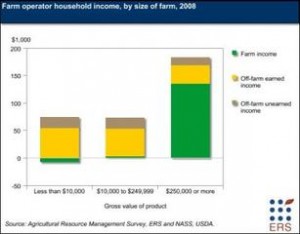 For farms that bring in between $10,000 and $249,000 in gross sales, farm income represents a tiny fraction of farm families’ overall earnings (see green sliver in middle bar). This category encompasses the non-hobby, small- and mid-sized farms that supply the bulk of produce at farmers markets. After farm expenses, these farm families bring home about $60,000 in annual income, a very small slice of which comes from farm profits.

There are many challenges for urban farms: including issues of scale, labor, distribution and storage (although many of these are not so different than the challenges that face any farm). But we need to recognize that an ability to generate a healthy profit is not a reasonable demand.

While it’s true that urban land is expensive and its use should be geared toward maximal economic impact, it’s easy to gloss over the fact that investors aren’t falling over themselves to pour money into cities’ neglected and struggling urban cores. These areas simply aren’t about to spontaneously turn into hi-tech meccas. Urban agriculture, when practiced in the intensive style of growing which can yield huge amounts of food on small plots, provides jobs — both for farm workers and tradespeople, skills and a product that doesn’t just go right into urban residents pockets but into their stomachs. It should be viewed as a key component of urban development, not classifed as a hobbyist Yuppie trend.

Originally posted on Beyond Green