On Kids and Vegetables, an Interview with Tanya Henderson 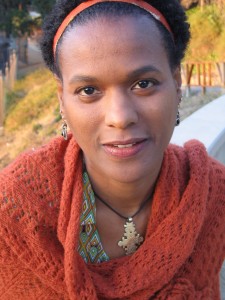 Tanya Henderson is a cooking instructor for the Berkeley Unified School District (BUSD). During the day she cooks with teens at Willard Middle School. Once a week she whips up dishes with kids in the after-school program at Malcolm X Elementary. She also teaches evening nutrition classes to parents at several BUSD locations.

A former New Yorker who worked in television — including directing a season of MTV’s Real World – Henderson moved to Berkeley to attend Bauman College, a holistic nutrition and natural culinary arts academy. Now a certified nutrition consultant and educator, she specializes in digestive wellness, allergies and eating disorders, and sees private clients after hours.

Henderson describes herself as ageless and lives near Lake Merritt in Oakland. We caught up at Mudrakers Cafe, opposite Willard, over gunpowder green tea.

What do you like about teaching cooking to different age groups?

The younger ones are so excited and eager. They come to cooking class with open hearts. They’re willing to try anything and have less judgments about the food than older kids.

The middle school kids are able to take in more of the nutritional information that you want to pass on. And they’re more independent in the kitchen; it’s more about guiding them through a recipe than it is with the younger age group.

The adults are the lock and key. It’s not enough to expose the kids to eating nutritious food if they go home to an environment that doesn’t support eating this way. The parents do make a difference. I’ve found them really willing to learn about healthy ways to feed their families, including organic food, the Environmental Working Group’s dirty dozen, and how to read ingredient labels.

What are some of the challenges of cooking with children?

The young ones require a fair bit of hand holding; you have to walk them through a recipe. With the older adolescents you’re dealing more with attitudinal issues.

What have you learned from working with BUSD school children?

Children are teachers too. And they like to experiment. I’m all for experimenting, that’s how I cook at home, in a spontaneous way. I tell the kids let’s learn to follow a recipe first, figure out what you like, and then break the rules.

True or False: All kids  — even Berkeley kids — hate vegetables?

False. Kids may say they’re allergic to or don’t like vegetables but in my experience it’s more accurate to say they don’t care for how something is prepared. Take broccoli, which often gets a bad rap among kids. I roast broccoli, cauliflower, and potatoes, tossed in olive oil with salt, pepper, and other seasonings, and kids can’t get enough of them. I don’t buy it when someone says kids don’t like vegetables. I think they just don’t like how they’ve been cooked.

What’s one of the myths about kids in the BUSD schools?

That they’re all eating organic, seasonal, local food at home. That’s just not happening in every home — or even many of the homes of the kids I teach. The BUSD school demographics are very diverse. A large percentage of our student population qualifies for free or reduced lunch. For many of our families, there isn’t the culture of eating healthy, whole food at home.

How can parents of lesser means in the community access organic, seasonal food?

Vendors at the Berkeley Farmers’ Market accept EBT cards, which are basically the new food stamps. And there’s Farm Fresh Choice, an off-shoot of the farmers’ market that helps economically-disadvantaged people. The BUSD parent nutrition classes I teach are free and we specifically want to reach low-income families to show them how they can eat delicious, nutritious food on a budget.

Do you have a local food hero?

Alice Waters.  She created a model program in the Edible Schoolyard. She’s pushed the cause of local, seasonal, organic farmers’ market food and had a huge impact on school food in Berkeley, which is recognized around the country.