An Interview with Shelley Rogers, Director of What’s Organic About Organic? (VIDEO) 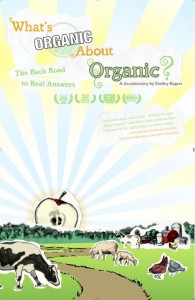 The film What’s Organic About Organic? explores how the organic label has evolved, how organic farmers view their work and the tension between maintaining high environmental standards and rapid market expansion. I recently spoke with Shelley Rogers, the director of the film, about the real meaning of organic, the barriers to going mainstream and good dirt.

Civil Eats: Why did you think it was important to explore the subject of organic now? Is the public generally confused about what the label means?

Shelley Rogers: There is a lot of confusion about all food and organic food in particular.  I’ve grown up in an era of ever-conflicting advice about nutrition and health along with massive doses of food marketing and green-washing. It seems every few months there’s a different study out attempting to debunk the positive attributes of organic food. A lot of high-powered interests have a lot at stake in maintaining their status quo chemical agriculture profit line.

CE: What do you think is keeping organic from becoming more mainstream?

SR: I think pricing is a challenge for most people to access organic food.  Of course, we don’t pay the true cost of most food at the check-out counter.  We’ve become accustomed to allocating a small portion of our personal budgets to food, and in doing so, we’ve externalized the costs to our environment and health.

CSA models and farmer’s markets are a great way to cut the price point for citizens, but [these] are not always convenient for people, and in urban environments farmer’s markets can still be a bit pricey.

I think one big culprits is infrastructure and transportation costs.  Regional food systems have been systematically dismantled, which makes it difficult for farmers to get their products processed before reaching market (like slaughter houses, etc.) and costly to get the products to market. Plus, whole-sale retail outlets want fewer contracts to negotiate and they want farms that can supply whole regions for the whole season for the price they dictate.  This combination makes it very difficult for small and mid-scale growers to reach the marketplace.  Since most organic farms are small/mid-scale, this makes it difficult for eaters to access the food they grow at a reasonable price.

CE: From your experience talking to farmers, what would you say are the core principles of organic farming?

SR: The single recurring theme from every organic farmer I’ve ever met is their reverence for and attention to the health of the soil.  Everything else stems from that.  When you find farmers who respect the tiniest of things—microbes and rhizobial life—you also generally find they respect the larger issues like social justice and healthy food access.

CE: Your film presents both the large organic and small organic story. Is one truer to the original meaning of organic than the other?

SR: That is a tough question.  The film has an element of a cautionary tale about what can happen when the vagaries of regulation are exploited, which really drives home one of the core principles of democracy—that whole Jeffersonian idea that the price of freedom is eternal vigilance. The good news is that as citizens we have a voice to shape the way the organic standards are maintained and upheld.

In general, though, I think the reality of farming within the principles of organic doesn’t have to be scale dependent. There is potential for great environmental benefits when we have all types of agriculture involved in organic production.

One lady I interviewed for the film, Tracy Miedema, told me a story about a mixed operation that she worked for where they farmed thousands of acres conventionally and only a fraction of their acres organically.  She talked about the farm managers and how they learned from managing 10 acres of fields organically and that it actually worked! After that, they started questioning the directions on the pesticide labels and would use less than advised on their conventional plots.  Just think of what benefits we could see if all sorts of farms reduced their use of agri-chemicals—even better if they transitioned some or all of their acres to organic. If farmers were given market support and if we had public policies that didn’t externalize the costs of chemical agriculture, I think we would see a lot more of all kinds of organic farms (big and small) and that would be a good thing.

CE: What are the big debates happening now about protecting the original meaning of organic?


SR: Well, there are always debates about what materials should be allowed, which is why the National Organic Standards Board is so important—they make decisions about the National List of allowed and prohibited substances in organic production.

And the National Organic Program recently announced the long-awaited clarification to the Pasture Rule, which means there are now clearer definitions regarding how much time and how much of an organic ruminant animal’s diet has to come from pasture.  There’s a lot more red tape now, which will close the loophole, so to speak, but it will also make it more difficult for new producers to enter the organic marketplace.  In general, though, it’s a really good thing that they clarified things and the USDA has said that this is now the “era of enforcement” for organic production.

CE: What do you hope audiences will take away from the film?

SR: My hope is that the film will inspire audiences to realize the need to take action to make our agricultural policies more ecologically based and to support farmers whose practices improve the quality of our land and communities. If people simply think twice the next time they go buy food or have a deeper conversation with their neighbor about the food system after watching the film, I will be glad.

The film debuts at the HERE Theater in New York City the week of June 21st – 27th. Following each screening will be a panel discussion focused on one of the thought-provoking ideas brought up in the film. You can also watch the trailer here: