How Green is Blue? Lessons on Aquaculture from the Cooking For Solutions Conference | Civil Eats

How Green is Blue? Lessons on Aquaculture from the Cooking For Solutions Conference 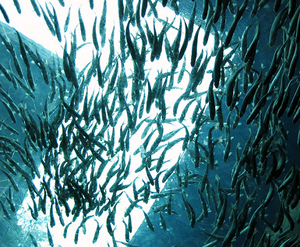 The drive from San Francisco to Monterey cuts directly through the heart of commercial California agriculture. The road winds past thousands of acres of coastal crops, industrial-sized sprinklers, and crews of laborers stooping to hand-cut heads of lettuce and pick strawberries. It’s the kind of monocropping known for methyl bromide, nitrate contamination, and a whole range of other environmental problems.

These farms made for a useful comparison, however, when it came time to talk about fish farming at the Monterey Bay Aquarium’s recent Sustainable Food Institute.

The panel in question was called “Greening the Blue Revolution” and it brought together experts from a variety of disciplines to discuss the ecological challenges involved in fish farming. The panelists didn’t agree on everything but one thing was clear: many of the principles that apply to farming sustainably on land should also be applied to aquaculture.

As wild seafood becomes increasingly scarce, aquaculture continues to grow steadily. According to panelist Howard Johnson of the Sustainable Fisheries Partnership, around 50% of the seafood we consume globally (around 52 million metric tons) is farmed. And yet, like agriculture’s Green Revolution, the first several decades of fish farming have been geared purely toward production, with little thought toward its ecological impact.

Aquaculture has made once-luxury foods affordable; as much as 80% of the fresh and frozen salmon consumed in the US are farmed, for example. And while the price is right, said Roz Naylor, Professor of Environmental Earth System Science and Economics at Stanford University, “the cost may actually be very high in terms of the externalities.” For example, aquaculture sites are known to foster parasites like sea lice that can impact nearby wild salmon populations, farmed fish escape (to cross-breed with wild fish and compete for resources), and larger marine animals are often killed when they get too near these pens.

Peter Bridson, Aquaculture Research Manager at Seafood Watch, has observed first hand what he calls the “huge boom-bust cycles of disease, overproduction, poor economics and marine resource use” associated with commercial salmon and shrimp farming. But, he says he sees signs that things are changing. For instance, Seafood Watch recently named its first green farmed product – Pacific Coho salmon raised in fresh water closed containment systems. Only one such system exists to date, but Bridson is optimism that it could be scalable.

The industry’s real “Achilles heel,” the panelists agreed, is what (and how much) farmed fish eat. While aquaculture is ideally meant to lighten the pressure on wild fisheries, that has yet to become a reality; in fact, for as long as farmed fish eat a diet based on fish meal and fish oil (made from wild seafood), the two will remain inextricably linked.

“As aquaculture grows, it will place more and more pressure on forage fisheries,” said Naylor. Forage fish are the smaller species – sardines, menhaden, pollock, herring, and krill – which are caught mainly as food for larger species. Just like in the case of livestock production, where a great deal of the land is used to produce grain to feed cows and pigs, many aquaculture researchers are concerned about just how much ocean biomass is being used to feed carnivorous fish like salmon, tuna, and shrimp.

Over the last decade, Naylor added: “there have been enormous gains in terms of the efficiencies of feed conversion, of lowering the inclusion of fish meal and fish oil in the feed.” And there has also been a concerted effort to move toward farming vegetarian species such as carp and tilapia. However, Naylor points out, those species are also now being fed fish meal to speed up growth. Almost 50% of carp and over 80% of tilapia eat feed made up of around 5% fish meal. This may seem small, said Naylor, but “if you add up the volume of all this fish and look at how it contributes in sheer tonnage, it’s big. Carp is now using almost as much fish meal as salmon is. So it’s really a race between improvements that we can make per fish and the volume of increase that we’re seeing [in production].”

If not wild fish meal, what exactly should we be feeding farmed fish? This is where things get tricky. Naylor detailed a whole range of recent efforts – from soy and other plant-based foods, to genetically modified canola and linseed, to single cell proteins and yeasts and animal byproducts such as feather meal from poultry.

And while these solutions would indeed take pressure off the oceans (poultry byproducts, for instance, are already in use), they raise other familiar concerns. During the Q and A session, Grist food editor Tom Philpott got right to the heart of the livestock-aquaculture comparison. “Shifting cows from grass to corn turned out to be very bad for cows,” he said. “I’d be very surprised if shifting salmon to corn could be good for salmon. And the last thing we need in this country is another market for industrially produced corn and soy.” 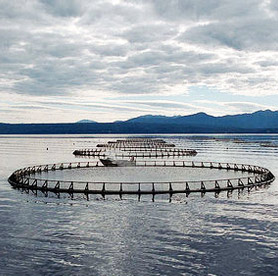 Seafood Watch’s Bridson responded, in regards to the recently green-lit farmed Pacific Coho. “In that case it was mainly because it was a closed system,” he said. “We don’t assess those bigger picture things, such as how reducing fish oil might lead to using genetically engineered soy, which could have an impact on Amazon rainforests. Those are all of real concern, but – at the moment – we’re focused on the oceans.” In other words, more immediate environmental issues have often overshadowed the question of feed in aquaculture.

In pure efficiency terms, the “green” Pacific Coho feeding system is far better than most; its feed ratio has been reduced to 1.1 pound of wild fish to 1 pound of farmed fish – an impressive number compared to most farmed salmon which requires as much as an 8:1 ratio. None the less, Bridson admitted that there are much larger questions at hand, and he said he hopes to have a more complete range of life cycle data available to incorporate into the Seafood watch analysis in the future.

Roz Naylor is also interested in larger questions about the full life cycle of fish feed. “This is really important question for all of us,” she said. “On the terrestrial side, if you’re not using [industrially farmed grain] for salmon feed, you’re using it for poultry, cows, or biofuels.” On the consumer end, she added, there may also be ways to stem the tide of demand for carnivorous fish. “Maybe we should be eating much less food that requires any feed, because all of these systems are crucially linked.”

There’s More than Fish in the Sea

As with agriculture, part of the answer to our aquaculture bind may lie in diversification.

Dr. Thierry Chopin, a marine biologist at the University of New Brunswick, spoke about his work to counter the trend of monoculture in fish farming with systems that integrate several aquatic species farmed in proximity. The method he uses is called Integrated Multi-Trophic Aquaculture or IMTA and it involves farming fish, shellfish and seaweed together. Fish create nutrients that can be polluting in excess, but when kept in small numbers, in proximity with other species, such as mussels, sea urchins, and seaweeds (which absorb the nutrients in various stages) the end result is what Chopin’s website calls “an age-old, common-sense, recycling and farming practice.”

Chopin pointed out that 44% of the biomass produced at sea is seaweed, while 44% is shellfish, and only around 9% is fish. His hope is that the food perceived “lower value” will gain enough traction in the developed world so as to balance the production needs and make IMTA a viable model for aquaculture producers (several fish farmers in Canada have already adopted the system). “Sea plants will have a lot of protein, especially when grown next to salmon, a source of nutrients,” he says.

Peter Bridson agrees. “There is so much more to the blue revolution than salmon and shrimp,” he says. “We have this kind of ongoing obsession with these species, but there are huge production volumes of shellfish and freshwater fish and seaweeds…and these really do have the potential to be so much more sustainable.”