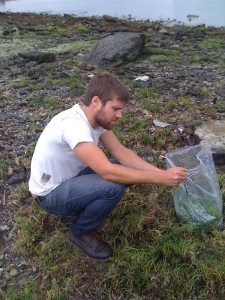 Have been mulling over just what to say about forageSF founder Iso Rabins ever since I attended one of his underground dinners back in February. The meal was a big hit and, as billed, featured plenty of wild foods plucked from local woods, parks, and seas to keep a trend-spotting foodista happy.

Plus my galpal and I felt vaguely au courant showing up for supper at an unknown Folsom Street location.

We shared a communal table with a gay couple who sung the praises of their forageSF CSA box, Asian-American friends from the outer SF neighborhoods in search of something a little edgier to celebrate Chinese New Year, and canners and jammers from Pacific Heights, of all places. Go figure.

In a relatively short amount of time, Rabins has developed a devoted culinary cult following for his off-the-grid, gourmet venture, which includes a CSA box filled with gleaned goodies such as miner’s lettuce, ramps, and nettles, secret seasonal feasts like the one I attended, and local wild food walks. Rabins says he hopes his foraging forays help city folks get in touch with the wider, wilder world. A worthy goal, for sure.

Rabins is also the driving force behind another clandestine city culinary event, the Underground Farmers Market, a monthly meet held in San Francisco’s Mission District that exudes more of a party vibe than a venue for earnest produce lovers  — with long lines snaking around the block filled with inner-city, health-conscious hipsters in search of pork-belly buns (Rabins specialty), baked goods, homebrews, pickles, and preserves, all for sale by DIY home cooks.

Stephanie Rosenbaum did a nice job conveying the scene in a post for Bay Area Bites. (This writer did swing by a recent farmers’ market but didn’t queue to get in. I gather since the market moved to a bigger space, the crowd control issues are a thing of the past.) 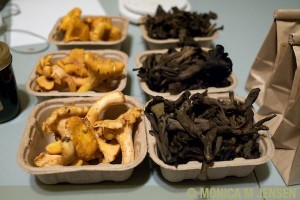 Vendors happily flog their foodstuffs sans city approval or permits — which can prove prohibitive for urban-homesteading types trying their hand selling on a small scale. (Rabins does his own, informal quality control, tasting every item for sale.)

The frequently plaid-clad Iso Rabins is a king of inner-city cool and in high demand in culinary circles. He writes an occasional column for CHOW, speaks at food panels like a recent Kitchen Table Talks, and gathers lots of press for his projects.

His events typically sell out, and when he’s not foraging, cooking, or penning posts for cyberspace, he’s contemplating the contents of a book project about bringing wild food recipes to urban home cooks.

What most impresses me about Rabins is his quiet intention to make a living out of doing what he loves. He’s the sole proprietor of forageSF and while he’s hardly bringing in the big bucks — he tells me he’s now able to pay the rent without stress each month for the first time in a while — he’s doing what all those corporate big shots suggest: Building his brand, diversifying his portfolio, and expanding his franchise (an underground market is set to open in the East Bay in June).

His advice? “Just go for it, the worst that can happen is that you’ll have to move back in with your parents,” says the 28-year-old aspiring chef, who has done time toiling in brick-and-mortar restaurants. “Beyond that, think of something that you wouldn’t mind doing seven days a week for a year, and craft your business around that. If you enjoy doing it, you’ll keep doing it, even if money doesn’t come in immediately. Sooner or later it will support you.”

Hmmm. That’s the kind of advice we writers — the ones caught between the demise of the dead-tree-media and the advent of the don’t-pay-media — may do well to follow.

Rabins is one of the budding new food entrepreneurs buzzing around the Bay Area, reinventing how to build a culinary career in these post-recession, social-media savvy times. I’ve profiled two high-end confectionery makers who found their sweet spot in the marketplace while holding onto demanding day jobs. I’ve also showcased a successful non-profit cooking program for kids run by a recent graduate.

If you’re local, don’t just take my word for it, you can get a taste of Rabins’ foraging finds by attending a Wild Kitchen feast but check out previous underground eats and sign up for email invites for future events.

Or take a wild walk (an amble, really) in San Francisco or the East Bay. I attended a recent such meet-up in a modest park in Oakland led by a gregarious guide who goes by the moniker FeralKevin. The guy knows how to glean goodies like nobody’s business and was full of handy tips about how to incorporate wild weeds into home cooking.

Find out when the next SF underground market is slated by becoming a member. (To date, the city’s health department has given forageSF room to grow by making market goers sign up for his “club,” though Rabins suspects it’s a matter of time before he gets cited.)

What say you, readers? Share your thoughts about taking a walk on the wild side below.