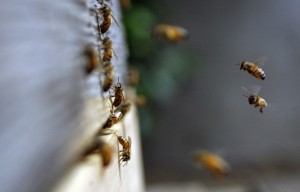 According to the recently released annual survey by the Apiary Inspectors of America (AIA) and the Agricultural Research Service (ARS), more than a third of U.S. managed honeybee colonies—those set up for intensified pollination of commercial crops—failed to survive this past winter. Since 2006, the decline of the U.S.’s estimated 2.4 million beehives—commonly referred to as colony collapse disorder (CCD)—has led to the disappearance of hundreds of thousands of colonies: Hives are found empty with honey, larvae, and the queen intact, but with no bees and no trail left behind. The cause remains unknown, but appears to be a combination of factors impacting bee health and increasing their susceptibility to disease. Heavy losses associated with CCD have been found mainly with larger migratory commercial beekeepers, some of whom have lost 50-90 percent of their colonies.

A “keystone” species—one that has a disproportionate effect on the environment relative to its biomass—bees are our key to global food security and a critical part of the food chain. Flowering plants that produce our food depend on insects for pollination. There are other pollinators—butterflies, moths, beetles, flies, and birds—but the honeybee is the most effective, pollinating over 100 commercial crops nationwide, including most fruit, vegetables, and nuts, as well as alfalfa for cattle feed and cotton, with a value estimated between $15-$20 billion annually. As much as one of every three bites of food we eat comes from food pollinated by insects. Without honeybees, our diet would be mostly meatless, consisting of rice and cereals, and we would have no cotton for textiles. The entire ecosystem and the global food economy potentially rests on their wings.

Experts now believe bees are heading for extinction and are racing to pinpoint the culprit, increasingly blaming pesticide usage. U.S. researchers have reported finding 121 different pesticides in samples of bees, wax, and pollen. New parasites, pathogens, fungi, and poor nutrition stemming from intensive farming methods are also part of the equation. Three years ago, U.S. scientists unraveled the genetic code of the honeybee and uncovered the DNA of a virus transmitted by the Varroa mite—Israeli acute paralysis virus (IAPV)—found in almost all of the hives impacted by CCD. Researchers have also found the fungus Nosema ceranae and other pathogens such as chalkbrood in some affected hives throughout the country.   Other reported theories include the effects of shifting spring blooms and earlier nectar flow associated with broader global climate and temperature changes, the effects of feed supplements from genetically modified crops, such as high-fructose corn syrup (HFCS), and the effects of cell phone transmissions and radiation from power lines that may be interfering with a bee’s navigational capabilities. (Last year, a study revealed that a contaminant from heat-exposed HFCS might be killing off the bees.) However, according to a recent congressional report on CCD, contributions of these possible factors have not been substantiated.

The industrial bee business and the demands of intensified food production could also be playing a role in the bees’ demise. Widespread migratory stress brought about by increased needs for pollination could be weakening the bees’ immune systems. Most pollination services are provided by commercial migratory beekeepers who travel from state to state and provide pollination services to crop producers. These operations are able to supply a large number of bee colonies during the critical phase of a crop’s bloom cycle, when bees pollinate as they collect nectar. A hive might make five cross-country truck trips each year, chasing crops, and some beekeepers can lose up to 10 percent of their queens during one cross country trip. Bees are overworked and stressed out.

California’s almond crop is a prime example of our reliance on bees’ industriousness for our agriculture success. The state grows 80 percent of the world’s almonds, making it our largest agricultural export and bringing in a whopping $1.9 billion last year. The crop—with nearly 740,000 acres of almond trees planted—uses 1.3 million colonies of bees, approximately one half of all bees in the U.S., and is projected to grow to 1.5 million colonies. The U.S. Department of Agriculture is now predicting that Central Valley almond growers will produce about 1.53 billion pounds of almonds this year, up 8.5 percent last year. To meet the demand, bee colonies are trucked farther and more often than ever before and demand for bees has dramatically outstripped supply. Bee colonies, which a decade ago rented for $60, cost as much as $170 this February in California.

Few organic beekeepers have reported bee losses, suggesting that natural and organic bee keeping methods may be the solution. In addition, organic farmers who maintain wildlife habitat around their farms are helping to encourage bees to pollinate their crops.  “The main difference between our farm and our conventional neighbors is the amount of wildlife and insect habitat that we have around the edge of our farm,” said Greg Massa, who manages Massa Organics, a fourth generation 90-acre certified organic rice farm near Chico. Massa started growing organic almonds six years ago, and works with a small, organic beekeeper in Oregon who brings in 30 hives to his farm. Massa’s farm has a large wildlife corridor which has been revegetated with native plants and covered in mustard, wild radish, and vetch, a favorite of bees and also a good nitrogen source for his rice crop.

Time might be running out for the bees, but there are simple actions we can take to make a difference. First, support organic farmers who don’t use pesticides and whose growing methods work in harmony with the natural life of bees. In particular, buy organic almonds. Don’t use pesticides in your home garden, especially at mid-day when bees most likely forage for nectar. You can also plant good nectar sources such as red clover, foxglove, bee balm, and other native plants to encourage bees to pollinate your garden. Provide clean water; even a simple bowl of water is beneficial.  Buy local honey; it keeps small, diversified beekeepers in business, and beekeepers keep honeybees thriving. In addition, you can start keeping bees yourself. Backyard and urban beekeeping can actively help bring back our bees. Finally, you can work to preserve more open cropland and rangeland. Let’s use our political voices to support smart land use, the impact of which will not only result in cleaner water, soil, and air, but also just might help save the humble honeybee.

Originally posted on the Inside Scoop.